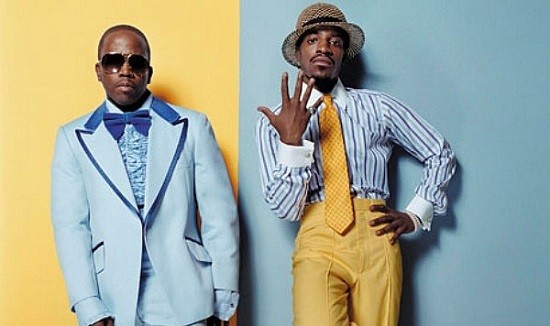 Did you fully take that in? OUTKAST! Not only will the 'Kast put on a memorable show, but its inclusion also proves that we're obviously psychic (evidence here and here), and you readers obviously are outstanding at pestering the C3 Presents folks into doing what you want. High-fives, everybody!

But the LouFest lineup excitement doesn't end there: Outkast will share a bill with Arctic Monkeys, Cake, Grouplove and Matt & Kim, among others. Here's the full lineup for LouFest 2014:

Tickets go on sale today, May 13, at 10 a.m. at loufest.com/tickets. Two-day tickets are $95, inclusive of all fees. VIP tickets are $350 and include access to the LouFest VIP lounge with complimentary beer, wine and specialty libations all day, catered food, air-conditioned restrooms and more.

Continue to page two for more information about LouFest 2014.

As completely unbiased, integrity-filled journalists, we think that the 2014 lineup is a huge step forward for LouFest -- all of these acts are rad and most are very well known. As readers know, RFT Music has been pushing for Outkast to headline LouFest for quite some time. Once the 'Kast announced in January that it would reunite for a summer festival tour, we began banging the drum to bring the duo to St. Louis. In March, Outkast was named to this year's Lollapalooza roster; because LouFest and Lolla share C3 Presents as a producer, our hopes grew even higher. Throw in the fact that LouFest had been expanding the festival each year, adding bigger acts and more stages, and we knew that the St. Louis shindig was poised to evolve into something even greater.

Last week we became giddy when we deduced a few of the bands that would be announced as part of this year's LouFest lineup (later confirmed by the festival's social-media clues). In addition to the headliners, supporting acts like Grouplove, Cake, Portugal. the Man, Kelis and Lettuce will bring depth to the Forest Park festival and showcase a wide variety of musical styles and eras.

LouFest will continue its tradition of giving local acts a major stage. We're looking forward to what St. Louis bands Old Salt Union, Pretty Little Empire and Big Brother Thunder & the MasterBlasters will bring to tens of thousands of revelers. Moreover, Dylan McDonald & the Avians have St. Louis ties, as McDonald is the son of noted singer-songwriter and St. Louis native Michael McDonald.

Have you missed some of our LouFest coverage so far? Find the biggest stories here, or check out individual entries related to LouFest artists: - Attention LouFest Organizers: Please Get OutKast, Thanks - Outkast Will Be Performing at Lollapalooza: What Does That Mean for LouFest? - LouFest Organizers Ask: Who Do You Want To Play This Year? - LouFest Lineup: Here Are the First Nine Bands That Will Be Announced

LouFest This Just In