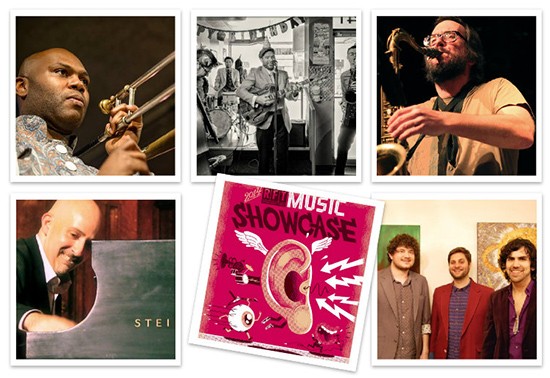 If you've never heard of Dave Stone, you are out of the loop. In addition to his more than twenty years of contributions to St. Louis' noise and free-improvisation scenes, Stone's trio -- composed of himself, bassist Bob DeBoo and drummer Kyle Honeycutt -- has got to be breaking some kind of record with its nineteen-year-long Friday night residency at Mangia Italiano. The pianoless trio -- all three accomplished players in their own right -- slays standards, throwing in the odd original and even a bit of free playing. If you're a jazz fan and you haven't yet seen the Dave Stone Trio, cancel your plans this Friday and head to Mangia. You won't regret it. -Nick Horn

The most old-school of jazz purists probably wouldn't call the music of Lamar Harris "jazz." Luckily for those of us not so hung up on labels, the same eclecticism and innovative edge that may alienate traditionalists results in a distinctive, soulful blend of electronica, jazz, afrobeat and a laundry list of other styles. Despite the enormous range of influences he incorporates, the music of the immensely talented horn player -- who also goes by the moniker DJ Nune (pronounced "noo-nee") when he's performing as a DJ -- is always focused, purposeful and usually even danceable. If you dig what he's done so far, be on the lookout for The Shawn Carter Jazz Suite, a collaboration between Harris and fellow nominees the People's Key, to be released this summer. -Nick Horn

University City native and jazz pianist Peter Martin has a pretty impressive set of credentials, and that's putting it lightly. Martin serves as the musical director for iconic jazz singer Dianne Reeves, and was responsible for arranging and providing piano for her Grammy-winning soundtrack to the film Good Night, and Good Luck. In addition to his work with Reeves and the three albums he has released under his own name, Martin has recorded with jazz legends including Johnny Griffin, Wynton Marsalis and Joshua Redman, and he also offers an innovative and comprehensive curriculum of online jazz-piano lessons via his website, petermartinmusic.com. -Nick Horn

As the band's egalitarian-sounding name suggests, the People's Key is in the business of bringing jazz to the masses by building a repertoire of -- as the band's own bio calls them -- "new standards." Using songs by artists such as the Beach Boys, Radiohead, Queen and Michael Jackson as vehicles for improvisation, the People's Key continues the jazz tradition of fusing contemporary popular music with high-level musicianship and improvisational wit, putting on a show that appeals to music nerds and casual listeners alike. -Nick Horn

You don't have to work too hard to hear Tommy Halloran's sweet, craggy croon. The singer-songwriter is a fixture at saloons across town, but do yourself a favor and lean in to hear his craft over the clinking glasses and idle chatter. Halloran's post-war jazz guitar style is amber-hued, brimming with imagined nostalgia, and with his outfit, Guerilla Swing, he is able to transform jazzy clusters of chords into a full-band workout. His latest, Under the Catalpa Trees, might be the most aptly named local release this year: It's easy and breezy for sure, but it's got deep roots. -Christian Schaeffer