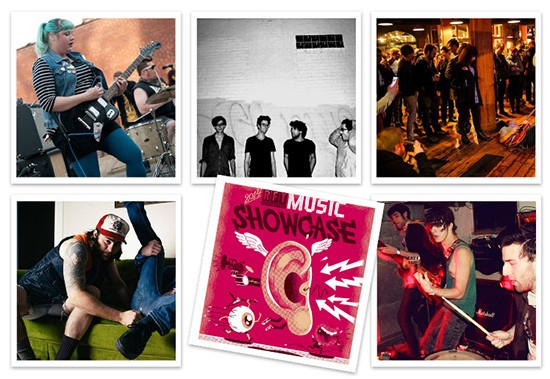 Boreal Hills manages to sound utterly stoned and utterly wired as its members slash through the sub-three-minute jams on last year's Dope Hugz. They care more than you'd guess from titles like "Belcher" and "Ripped Jeans," and what they care about are noisy no-wave tunes, art-punk ala Pere Ubu, '50s wild-man rockabilly yelps and slapback blasted through the cracked windows of whatever filthy rehearsal space sired such a convincing and appropriately filthy fuzz-punk sound. The band recently scored a Daytrotter session, and more national attention is surely in the offing in the months to come. -Roy Kasten

That's right, the group we crowned the "Best Band to Die in the Past Twelve Months" in 2013 is back from the dead and rocking harder than ever. The short respite has done nothing to dull the power of the Brainstems' fast and loose attack. The quartet still bashes out insanely catchy riffs through ragged guitars, with each axe-slinger backing up the song's designated lead howler for monstrous gang-vocal choruses. The band bleeds garage-rock essence. Its new EP, Cold Sweatin', finds the Brainstems playing in higher fidelity without sacrificing its ramshackle charm. All the players have become better soloists, and a few tracks find the group stretching out with repetitive, near kraut-rock grooves. If only all hiatuses could end so gloriously. -Bob McMahon

Even for a band accustomed to hard work, Bruiser Queen is having an insane year. Somehow, the garage-pop duo released an acoustic EP, a seven-inch split and finished an upcoming full-length, despite a nonstop concert itinerary. But it's best to stay busy when you've hit your stride. The kicky and catchy songwriting approach its members employ is still as simple as their guitar and drums setup, which works because Morgan Nusbaum and Jason Potter know their way around a killer hook. New songs feature '60s girl-group influences and a greater variety of tempos, but they are still powered by Nusbaum's rich voice. With a coo that's equally arresting as her bellow, Nusbaum's pipes are Bruiser Queen's not-so-secret weapon, pushing its songs into the stratosphere. -Bob McMahon

With devil-may-care guitar riffage and a rhythm section that's strapped in tight because it's about to hurl itself off a cliff, Kenshiro's is a punk band with a distinctly St. Louis sound. Guitarist Julio Prato isn't afraid to solo (and he knows his classic-rock shredders as well as he knows his post-rock switch-flippers), bassist Antonio Leone loves a good steady groove and drummer Joe Bayne digs those jazzy little fills before getting back to what he and the band do best: bash their garage-rock brains out. If you're looking for a band to make you fall in love with punk again, Kenshiro's has a proposal: Put down your PBR and rock harder. -Roy Kasten

Toddlers were among the Record Store Day revelers at Apop Records this year, pounding the sky and dancing to the bands outside. It was fairly innocent until the Wild Hex set, when the kiddos picked up extinguished cigarettes and previously drained beer bottles from the pavement and enthusiastically mimicked drinking and smoking while strumming serious air guitar. Wild Hex corrupted these developing minds with the pure power of thrashing, frantic rock & roll. The band's latest album, You're Gonna Get It, was released by Hexian member and proprietor of Don't Touch My Records Gabe "The Babe" Karabell. Currently, Wild Hex is working on an album slated for late May or June, recorded by Jason Hutto at Smokin' Baby Studios. Won't someone think of the children? -Jenn DeRose