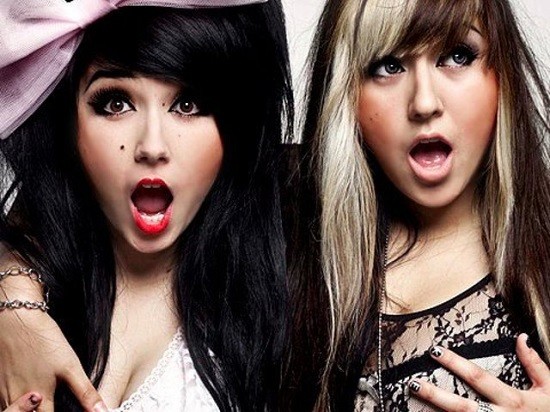 There was a time in the not so distant past when a social-networking profile was a place to proclaim your relationship status with something more than the obligatory "in a relationship" or "single" statement. It was a grand gesture to be "taken," complete with a glittery, GIF-y image of you and your scene sweetie, embracing cheek-to-cheek, scene-hair-to-scene-hair. That magical time and place was the land of Myspace (FKA the stylized MySpace) in the early 2000s, before it became the dead mall of social networking.

There were a couple types of bands that typified the straight-from-the-Internet scene: Bands with monikers consisting of a combination a month/girl's name/color/destructive sounding verb (see: August Burns Red or Colorado's own Breathe Carolina) that were made up of members of the screamy white boys with gauged ears and straightened hair who were raised in privileged, tract-home suburbs. And there was also the electro-rap raunch from acts like Millionaires. This Saturday, May 10, the Orange County sister duo will make an appearance at the Mad Magician to remind us that yes, Myspace lives.

Sisters Melissa Marie and Allison Green formed Millionaires in 2007, at the tail end of MySpace's reign as the hub of scene-kid activity. But in 2014, the snark rappers who love booze, boys and dollar bills still embody everything that made the world of Scene Queens fascinating in the first place, with their big hair, uncomfortable amounts of makeup and shit-talking facial expressions.

Millionaires have continued to cash in on the Myspace joke -- even if it is an old, tired one. The duo released "Myspace Pic (#myspacepic)" this year, a lyrical encapsulation of an Internet era of yore when you could stalk former/current flames with ease, have the deepest of conversations via IM (or on your Sidekick) and upload pictures of yourself in the hope of getting several dozen comments from the closest in your Top 8.

Before the selfie or even the GPOY there was the Myspace pic, a self-shot profile picture that was a planned, propped and Photoshopped work of art. Whether or not Millionaires create art is subjective, but one thing is for sure: It has the concept of the #myspacepic on lock, shoving the scene kids of Internet's past into the future, one song (with an alternate hashtag title) at a time.

Millionaires play Saturday, May 10, at the Mad Magician. Tickets are $10.