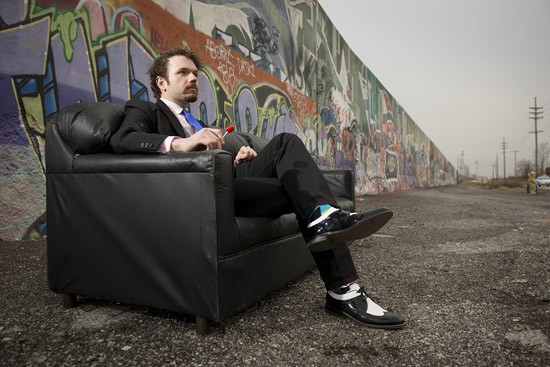 In his latest music video Fuck Bono, Ben Daniel appears as singer, guitarist, bassist and drummer, like a punk-rock Multiplicity. Because cloning machines aren't an option, Daniel tends to fill out the Uncredibles with a backing band -- but for him, that's an exception, not a rule. The Uncredibles is often performed as a solo act, with Daniel playing musical chairs on a stage crammed with instruments.

"There are no rules here, only music," appears on the inner sleeve of his self-titled CD. True to the words, Daniel doesn't sit well with tired genres. Daniel often croons like a jangly garage rocker, fitting shades of classic rock in under busy rhythm. And he knows the value of a good hook, often making use of standard pop structure, albeit with less repetition.

"It's a very mysterious process sometimes, how you can go for a while without writing anything worth remembering, and then out of the blue you'll write a song that just grabs you and makes you beyond excited. I'm not a believer in the mystical, but I can completely understand what another songwriter means when they say a song was 'given' to them," Daniel says, speaking on his free-form style of writing. By building each song part by part, he can inject sounds on a molecular level.

By applying a strict DIY ethos, Daniel approaches his band his own way. And by performing every instrument both live and on record, he can micromanage each part to form a greater whole. That autonomy allows for alternative paths from the status quo, including in the distribution of music. (Look for a sustainable bamboo eight-GB thumb drive with his album's cover etched on the front.)

Daniel took his time producing the Uncredibles' self -titled LP. The band's concept was conceived in 2004, but he spent three years before performing live. After five years of trial and error, Daniel has produced a very odd album that attempts to stretch very few songs over many styles. The genre-clashing might feel harsh at first, but the Uncredibles pulls it off in a way both subtle and bizarre.

Daniel plans on taking the Uncredibles on the road this summer. Catch him late next month on June 28 at the Heavy Anchor with Dr. Dan the Pancake Man and the Psychedelic Psychonauts.

Continue on as Ben Daniel fills in the blanks ahead of his string of gigs this Summer.

Ben Daniel, the brains behind the Uncredibles.

I didn't even know it didn't cost money to go to the zoo until I was an adult, because I had always gone to the Saint Louis Zoo as a kid. The same goes for all the other museums and points of interest in Forest Park -- it's an amazing resource and doesn't get the credit it deserves outside of St. Louis. Then, of course, we have one of the most beautiful theaters in the country at the Fabulous Fox Theatre. We have Laclede's Landing, the tag wall...I could go on for a while. Needless to say, even though I spend a lot of time on the road, coming back home to St. Louis is always something I look forward to.

I've learned the most from... even though I'm pretty sure I heard it come out of Robin Williams' mouth first, I would quote Hector Berlioz and say, "Time is a great teacher, but unfortunately it kills all its pupils."

I'm most productive when... I force myself into a corner and give myself no other option. Sometimes, I have to give myself a hard deadline to really kick myself into gear. Not some sort of arbitrary time to be finished or I'll be super disappointed and nothing else, but rather a deadline in which other people need and expect me to be finished or ready. It's amazing what you can get done when you have no other choice.

The St. Louis music scene could use... St. Louis has a lot of really great bands right now, and I mean a lot. What I don't think we have enough of is regular crowds at venues. Lots of big music towns like Nashville or Austin have people that go out to venues every night, regardless of who's playing, just to see a show. It's not unusual to play to a packed house without promoting it into the ground. St. Louis doesn't have that yet. Some days of the week are better than others, obviously, but you can promote the hell out of a show in St. Louis and end up only playing to a handful of people if it's on the wrong night in the wrong club.

The best post-show food in St. Louis is... since most local fare is closed by the time a show gets out, I'm gonna have to go with Denny's. Those banana-pecan pancakes are flippin' fantabulous!

The most difficult lesson I've learned while playing music is... don't take it for granted. It can be taken from you, and with very little warning. From injuring your hand(s), to blowing out your voice, to damaged hearing and all manner of things that can go wrong with you and your body that can stop you from doing what you love. I've experienced some of these over the years, and they are a truly frightening experience. In summation, wear earplugs, take voice lessons (if you're a singer) and take care of your body so you can do what you love for as long as you possibly can.