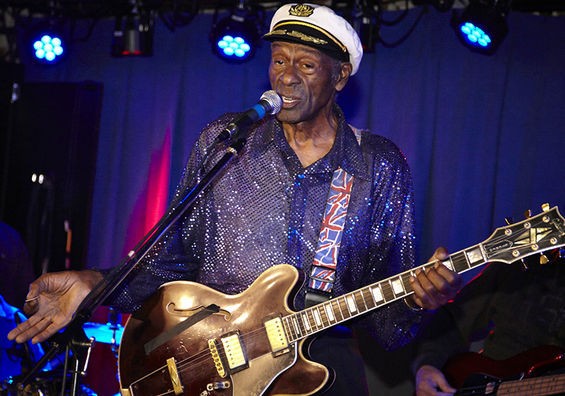 The Polar Music Prize, regarded by many as the musical equivalent to a Nobel Prize, was first awarded to Sir Paul McCartney and the Baltic states of Estonia, Latvia and Lithuania upon its foundation in 1992. "The difference with this one for me is that I've presumably been chosen from everyone in the world," McCartney said at the time. "You can't knock that; that's a high honor. They could have chosen all sorts of other people. I can think of a few people who you could choose for a music honor like this."

Founded in 1989 by Stig Anderson, the manager of the Swedish band ABBA, the prize has since been awarded to Joni Mitchell, Paul Simon, B.B. King, Bob Dylan, Ray Charles, Bruce Springsteen, Pink Floyd and Quincy Jones, among others (complete list here).

Now, the Sweden-based honor will be bestowed upon the father of rock & roll, St. Louis' own Chuck Berry.

The importance of this particular award is difficult to overstate -- this isn't some piddly Grammy, and with it comes a substantial cash prize, to the tune of £100,000 (or approximately $169,600). Berry is one of two recipients chosen for this year's prize, alongside opera and theater director Peter Sellars.

Here is Berry's citation, which accompanied the announcement of the award:

The Polar Music Prize 2014 is awarded to Chuck Berry from St Louis, USA. The parameters of rock music were set one day in May 1955, when Chuck Berry recorded his debut single "Maybellene". Chuck Berry was the rock'n'roll pioneer who turned the electric guitar into the main instrument of rock music. Every riff and solo played by rock guitarists over the last 60 years contains DNA that can be traced right back to Chuck Berry. The Rolling Stones, The Beatles and a million other groups began to learn their craft by playing Chuck Berry songs. Chuck Berry is also a superb songwriter. In the course of three minutes he conjures up an image of the everyday life and dreams of a teenager, often with the focus on cars. Chuck Berry, born in 1926, was the first to drive up onto the highway and announce that we are born to run.

The prize will be awarded to Berry on August 26 at a ceremony in Stockholm, which will be attended by King Carl XVI of Sweden. Berry is 87 years old and still tours. In addition to his regular Blueberry Hill shows, he recently returned from a trip to Russia.