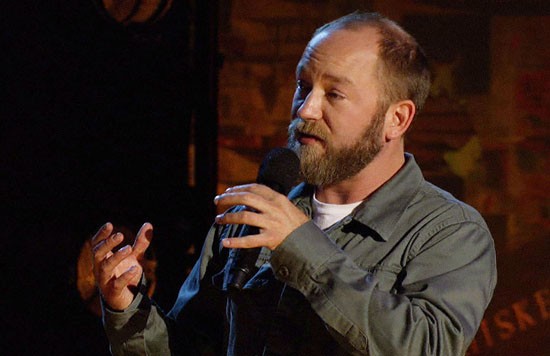 It's officially baseball season, so there's not much time for comedy left until October. Sitting in a dark club with a room full of jokes isn't much competition for a bright and sunny day, so while the weather is still not quite ideal, scan the comedy calendars and head to a show of your choosing. If you don't want to do the work yourself but are a fan of laughter, it's going to be OK. The work has been done for you.

STL Up Late is back up and running -- those of you more accustomed to segmented comedy are in luck! The show takes place Saturdays at 10 p.m. and welcomes a variety notable guests, all of whom are St. Louisans in some fashion or another. It's formatted as a late-night talk show, so you can expect a monologue, interviews, music and consistency.

For the May 10 installment, Eric Christensen and the cast and crew of STL Up Late welcome Ryan Doris, the writer and director of The Adventures of Time Slot (A Time Travelers Web Series) to their couch. Set to release late this summer, Time Slot is a comedy that follows an unwilling time-traveler as he wreaks havoc on some of the most important events in history.

Ryan (also of Action Box) and his Time Slot Team composed of the individuals who bring you "Parody Patrol", and "The Dealership" and a collection of other hilarious videos that have been making their way across the internet airwaves. So if you find it difficult to get off your own couch, head to the Internet and laugh on your own time.

Also on the show will be Middle Class Fashion, which is noteworthy because it is a band -- this being published on the music blog and all.

Also on May 10 Rich Talarico a former writer for Saturday Night Live and The Tonight Show who is now writing for Comedy Central's Key & Peele Show will be performing with the Improv Shop Veterans at, you guessed it, the Improv Shop. On the ground level, it's the writers who create the sketches, taglines and characters you have grown to love who in turn keep you coming back to the programs. Having the opportunity to take part in and experience their ideas as they come to fruition right before your eyes is truly one not to be missed.

I saw a man playing guitar this past Sunday in the foyer of the Arsenal Schnucks. Because of that, a comedy show at a bike shop doesn't seem s out of the ordinary. My hope is that stationary bikes will be made available to those who wish to exercise during the show. Plus biker (of the "pedal, pedal" not "vroom, vroom" sort) outfits are laughable in their own right. However! A few of Denver's topnotch comedians are making their way to St. Louis on the Fine Gents Down South Tour, and that's what this is really all about. Sam Tallent Nathan Lund, Bobby Crane and Matt Wayman are teaming up with Bare Knuckle Comedy's Brandon Judd to prove you can put comedy just about anywhere.

Three years ago, when a friend of mine insisted we go see Kyle Kinane at the Firebird, there were just a handful of people in the audience, and I wasn't sure what he'd dragged me into. My most vivid memory of the show was a moment when I realized the majority of the crowd was hunched over and heaving from laughing so hard. Then in 2012 I saw him again; he performed all new material and received the same results -- hunched-over, face in hands, drink-spewing laughter.

Kyle Kinane is introspective debauchery at its finest. It's the kind of self-deprecation you'd empathize if you weren't so charmed by the man telling the story. Kinane will make you envious your Friday night alone with a Tombstone Pizza wasn't as miserable as his. To top if off, Dave Ross of WOMEN, which was named one of the best video sketch groups by Splitsider, has the feature spot on the show. If you're a TV comedy connoisseur, you might have seen him on Tosh.0, and he's one of the incredibly intoxicated storytellers on the upcoming season of Drunk History. Cofounder of St. Louis' own Bare Knuckle Comedy, Kevin White will also be returning home from Chicago to open the show.

Brian Posehn's face is one not often recognized first and foremost for his career in standup comedy. You may recognize him from countless TV and film appearances, but his more notable achievements are as a writer and comedian. While he makes an excellent bear as Brian Spukowski on the Sarah Silverman Program, a gas-station attendant or random weirdo, it's best to catch him live and from the stage. Just last year he released The Fartist his newest hourlong standup special, and will be coming through St. Louis with his tour sidekick Jeremy Essig. Together, the two will take you on a journey of nerd-culture musings unparalleled by any other in the game.