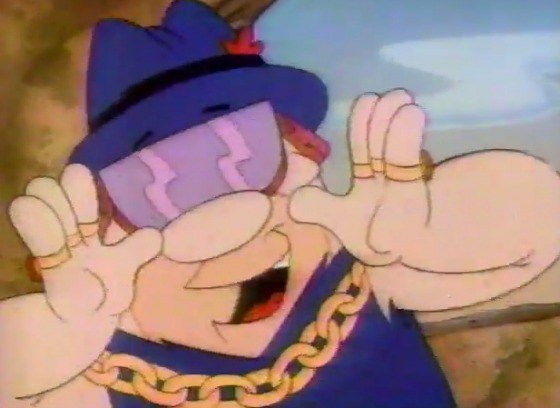 We've all seen it. Whether in real life or observing a work of fiction, a character is positioned to inexplicably begin rapping. A beat will kick in and/or a mic will be thrust in their hand and, for some reason, eight of their first nine words are "My name is...and I'm here to say."

Often followed by boasting about doing something "in a major way" or being "the _____est ______ in the U.S.A.," this rhyme has become the default archetype for how people who don't listen to rap think rap begins. It's been heard everywhere from when rap started appearing in 1980s commercials, and it continues to pop up today, most recently when former White House Press Secretary Dana Perino decided to dis Jay Z and the Obamas in rhyme. There's also the genuinely funny tweets from the likes of Michael J. Nelson and Will Sasso that show a self-awareness of it being the overused go-to rap opener. Tim Heidecker even worked it into his fake Madonna Super Bowl leak as an absurd gag.

But where did it come from?

In the early days of hip-hop (we're talking mid-'70s before the idea of it being on record was even conceived) the most important thing for anyone participating in the culture to do was get their name out there. Whether literally tagging their name in graffiti in public spaces or mastering signature breakdancing maneuvers, it was about getting your name in as many eyes and ears as possible. Of course, when it came to rocking the mic at a party to the break-a break-a dawn, there was no better way to have people know who you were than by identifying yourself.

This continued into the early days of recorded rap. From the bootlegs of Cold Crush Brothers, Fearless Four and Treacherous Three routines circa '78, you have several instances of the group's MCs starting their individual contributions to their routines with "I'm [their name] and I [some definitive character trait or signature action]." Getting into the first few rap singles from '79 onward, you have the same sort of identification, the most famous of which is probably "Rappers Delight's" "I am Wonder Mike, and I'd like to say 'Hello.'"

Yet, in the entire annals of this pioneer era of hip-hop, the closest thing to someone hitting the now ubiquitous cliche is on Grandmaster Flash and the Furious Five's 1980 single "Birthday Party" where Melle Mel states "Melle Mel and I'm here to say/ I was born on the 15th day of May."

But when analyzing a lot of these classic hip-hop routines, one has to be aware of the re-contextualization of a lot of popular music, including commercial jingles. One of which may be, even if subconsciously, the genesis of this particular cliche. The 1940s Chiquita Banana song, while predating hip-hop as a whole by about 30 years, is perhaps the first time the couplet was heard. Chiquita commercials featured different variations of the line, like the video above where a singing anthropomorphic banana seduces the banana-hungry public with "I'm Chiquita Banana and I've come to say/ Bananas have to ripen in a certain way." Perhaps it's the cultural touchstone of this earworm that inspired the Barney Rubble hip-hop reconfiguration "I'm the Master Rapper and I'm here to say/I love Fruity Pebbles in a major way."

It was in all likelihood not actual MCs writing these rap jingles in the mid-to-late '80s, but odds are their ubiquity was a lot of mainstream America's first, and perhaps only, exposure to hip-hop. It was a memorable reference point that commercial-heavy broadcast industry could drill repeatedly into viewers' heads.

But this perpetual repetition may have come from two respected names in the hip-hop culture as well. We spoke to executive director of the Hip-Hop Culture Center and hip-hop historian Curtis Sherrod, he says a reason for that introductory scheme's popularity might come from a daily recurring bit on Yo! MTV Raps hosts Ed Lover and Doctor Dre's Hot 97 morning show. "It was in effect before then, but those guys took elements from [the routine] and piggybacked off it. The audience would call in, and put their name or their tag in there, and they would create these situations every morning. [A caller] would be 'My name is _______ and I'm here to say dadadaaddada in a major way,' and it would always end, 'That sounds cool and that may be, but dadadada,' and they would do that every day. When driving to work, I'd know I was on time when that segment came on and I was going over the George Washington Bridge."

But Sherrod points out that the history of the routine goes much deeper than just its commercial presence. "MCs have always wanted to have superpowers, that's the influence of comic books and such. You've always wanted to be able to introduce yourself. The only reason MCs came about was to talk about the DJ, say where you were from, what you represented and what your superpower was. That [routine] was a relevant foundational part of hip-hop."

"You had to come up with a way to say your name," continues Sherrod. "If you weren't saying your name, why were you doing it?"