The early-twentysomethings sit on the patio at Ventana over various vices as they recount their origins. Ballard and Nehr are childhood friends from Collinsville, Illinois, while Beabout is a friend from Belleville they picked up on this side of the river. They've collectively spent plenty of time at the midtown cafe in the past year, both behind the barista bar and on the other side of it, hosting and performing at donation-based shows for touring bands of all kinds.

"Stonechat is a bird, and it's also an old English saying for shootin' the shit -- 'throwing around the old stonechat,'" explains Ballard. "The bird's named stonechat because it sounds like crackling pebbles. At the time when I named it, Charlie and I were doing a lot of concept sets with noise and ambience. For some reason, that seemed fitting."

The addition of Beabout, a classically trained pianist, has forced the former duo to really hone in on carefully crafting its compositions as a whole rather than working from a completely blank canvas, says Nehr, who runs his own live music recording service, HiLo Recordings. Songwriting often begins in Ballard's brain, a raw stream of consciousness that gains footing when carefully placed drumming and call-and-response keyboard riffs step in. 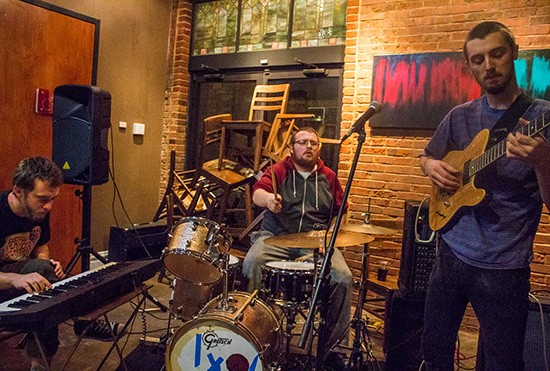 With collective influences including everything from Deerhoof and Hi Red Center to Yowie and free jazz, Stonechat jokes that they sound like "the Doors, if they were a punk band." Riffing off cynical and religious themes, the band plays intricate, off-kilter melodies spliced with dissonant chords, impassioned singing yelled from the gut, and slippery rather than straightforward rhythms. Stonechat juxtaposes noisy pop sensibilities and funk with punk and math rock, and the sharp execution of these weirdly overlapping shades makes its songs compelling from beginning to end.

"Sean and I are both intricate and vigorous, and Charlie fills it out and makes it flow," says Beabout. "There are lot of colors in there. Stonechat is just a void, like a black hole or the sun constantly going in and out."

"I work with adults with mental disabilities, and one of my clients is a really cool, nice guy. He has an obsession with dead batteries. We keep the dead batteries for him.... He calls them 'baccos.' I just latched on to that," says Ballard, explaining the album's name.

Preview the track "Brand On Looks," with album art by Lindsay Weigel, below. Pick up a copy on CD or cassette tape put out by locally based label Float Away Dangling.

We invited Stonechat to fill in the blanks ahead of its album-release show tonight. See what guitarist Sean Ballard had to say after the jump.

What I like most about St. Louis is... Sean Ballard: the way the city looks and feels. It is a cool old city that is big enough for me to get lost in and continuously realize I haven't seen every part of. And it's also small enough for a person's individual voice to be heard. It isn't hard to find people passionate about what they are doing here.

My favorite aspect of being in a band is... the babes. I don't know, sticking it to "the man" or whatever by getting people to see my shows and to buy "the man's" beer while they are at it. Honestly, I don't really know. I enjoy making music with my friends, and it is a way to get some things out of my head that have no place being there.

The St. Louis music scene could use... more musicians/artists/bands/showgoers that care less about their specific place in the scene and more about making the whole thing thrive for everyone. It isn't that what you are doing isn't important and that I don't care about it, but it's not the most important thing happening ever. Put love and pride in everything you do, but humility and selfless work goes a lot farther and is much better for our city. Be good to touring bands, treat them 100 times better than you would want to be treated while out on the road, and then go tour and talk about St. Louis!

The best post-show food is... Circle K down the road from my house.

The most memorable show I've ever played was... in Carbondale, Illinois. Charlie and I were in a different band before Stonechat and as we were setting up to play, a bar fight broke out where a man was struck with a pool cue and actually died. He hit the ground and the whole room was silent. There was a pool of blood on the floor, and the bartender motioned for us to start as they were carrying his body outside. After we played, Charlie went to get a beer and a guy sitting in the bar asked if he was in the last band. Charlie answered, "Yes," to which the man replied, "You guys sucked."

Read on for upcoming show information as well as a preview of BACCO, an accompanying comic mini-series to the album drawn by local artist Curtis Tinsley. 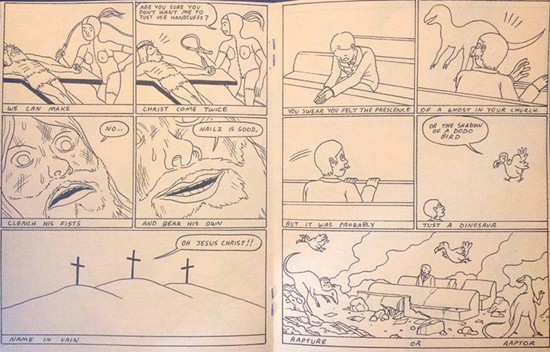