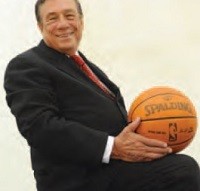 Donald Sterling is a magical, special type of individual. In addition to owning the LA Clippers, he also has a strong history of publicly spilling blatantly racist statements about his contracted athletes and other minorities. Despite his very well-known history, he somehow always manages to survive the fallout. In this way he has subtlety become an untouchable champion of racial ignorance. We live in 2014 and most of us have stepped into the future, but there's still a few old, crusty, wrinkled-up douchebags alive and kicking.

See also: Paula Deen Should Probably Just Own It

The worst part about this is that the Clippers are an underdog team with a few good guys on the roster. People enjoy cheering for them because on paper they're good guys. Chris Paul plays for the Clippers; he's often viewed as the NBA choirboy and family man. His image is squeaky clean. Blake Griffin is the residential NBA daytime-television hunk. Coach Doc Rivers is a legend and seems like a fun guy to play for.

I originally felt like the players should sit out -- personally, I couldn't imagine suiting up for Sterling. I gave it some thought, and I won't completely crucify them for playing, though. Not everyone is an activist, and there's nothing wrong with that. I understand the complications attached to the situation, and if you love the sport you just want to play at all costs.

Sterling had a problem with his girlfriend taking a picture with Magic Johnson and posting it on Instagram. He doesn't want Magic and other black people to attend his games either. Even as a lifelong racist prick, you'd think he would have enough common sense to give Magic Johnson a pass. He changed the game in his time, moving the NBA forward and making the league more progressive. He's also an amazing businessman and a winner of the highest order on the court. A living legend deserves more from the NBA than these ridiculous remarks.

Sterling is one of those self-righteous, wealthy white guys living as if it's 1825 in 2014. He is trapped in his own ignorance, and there's nothing anyone can do to change that. He doesn't give a shit about everyone being upset by his remarks. He believes what he believes, and if you don't like it, then it's up to you to do something about it...other than that he couldn't care less because his team is in the playoffs and those seats will continue to sell out. In his mind, his players will continue to march their black asses up and down the court, because he "owns" them.

NBA commissioner Adam Silver is pissing in his boots. He doesn't want to deal with this situation. The pressure is on everyone besides Sterling, because he has already stated how he feels about the ordeal. He'll probably issue an apology or pay a high-priced lawyer to convince everyone that it isn't his voice on those tapes. His players will remain upset, but they love the sport and want desperately to win an NBA title. But I hope Silver really understands the type of mentality attached to Sterling's behavior. He's more fit to own a fully functioning cotton plantation than an NBA team.

For most of my life, the Clippers have been one of the most boring teams in all of professional sports. In recent years they've made some power moves in the front office, and now they might actually be contenders for the NBA title. Most people technically still dislike the Clippers but are open to the idea of giving them a shot to prove themselves. We're just being nice because a few weirdos simply dislike the Lakers, and will support a team manufactured from horse defecation as long as it means they can cheer for the city of LA and not support Kobe Bryant and the Lake show.

Americans of all creeds and colors don't play around when it comes to their sports. Lil Wayne is usually quiet and reserved when it comes to issues like this, but Weezy is also a well-known sports fanatic. He issued a statement that I totally agree with, word for word -- I urge you to check it out. I'll end this discussion for my part by quoting the last line of it: "Purple and yellow, n*gg*."

Editor: Tef Poe is an artist from St. Louis city. Through powerful imagery and complicated honesty, he has earned a reputation as one of the best rappers telling the story of St. Louis, which is about much more than one place. Poe has been featured in music publications such as XXL and Urb Magazine. His project The Hero Killer was released on January 21 and was followed up by a full-length with DJ Burn One entitled Cheer For the Villain. Follow him on twitter @tefpoe. Get The Hero Killer here.