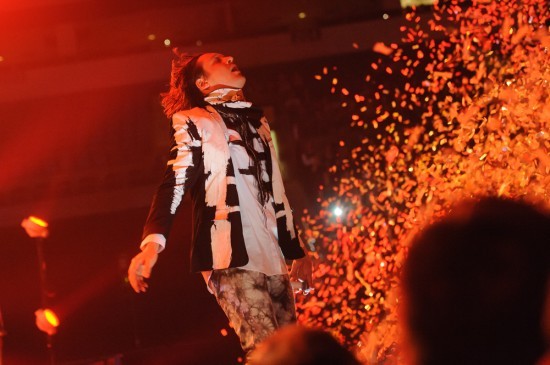 A severe thunderstorm may have been raging outside Chaifetz Arena last night, but within its walls, the Arcade Fire was busy whipping up a different type of shower.

On April 27, 2014, the gazillion-piece band from Montreal made it rain at least five times during its first St. Louis show since 2011. There was no water or dollar bills to be found, though -- this downpour was all confetti. Three bursts during opening song "Here Comes the Night Time," an explosion during "Normal Person" and a blowout during "Reflektor" set up and maintained a party atmosphere that encouraged nonstop reveling, and fans happily complied.

But the deluge of showboating occasionally made us want to hide under the pink umbrella we'd brought in with us.

To be sure, the Arcade Fire put on a very visual, memorable affair. The band did an excellent job of incorporating the themes of its October album, Reflektor, into its stage show, showcasing mirrors on the piano, in members' hands and above the stage. There also were two sets of video screens on either side of the stage divided into four parts, forming honeycomb diamonds that echoed the album's poster and graffiti art.

The interesting visuals carried over into band members' attire and dance moves. Vocalist/guitarist Win Butler wore a suit that was inspired by a black-and-white cow; several musicians sported jackets with glow-in-the-dark patterns; and vocalist/multi-instrumentalist Régine Chassagne sort of did the Robot, shaking her neon pink fringed wristlets as she danced.

Perhaps it was just that none of this fit together in a way that made the event cohesive. All of it instead rendered the band's interesting, layered music as secondary -- even forgettable -- to the spectacle, which was a shame.

No doubt, the Arcade Fire certainly put on one hell of a carnival for its 5,000-odd fans in Chaifetz: It was a discotheque and frat party rolled into one, which is not necessarily a bad thing. But the monsoon of pageantry that overtook the music left us feeling all wet.

Edited to add: We didn't hate the show; the visuals really were spectacular, and we love a good party. But those elements -- the bobbleheads, the skeletons, the mirrors, the lighting, the weird reflektor man, the self satisfaction emanating from certain band members -- were rather disconnected from each other, even within the light context of a Haitian "Kanaval." The sheer epicness that the visuals tried so hard to achieve jarred our attention away from the music. As we've seen during recent Nine Inch Nails and Taylor Swift tours, even the most obnoxious visual elements will work when there's a common thread among them and when they match the tone and heart of the music. Unfortunately, Arcade Fire's spectacle felt so random that the band's interesting songs took a backseat, becoming almost a non-factor. And with Arcade Fire's near-insistence of a dress code from the moment tickets went on sale, the band obviously was putting the extravaganza first.

Continue to page two for our notes and the setlist.

* Butler didn't yak a ton from the stage, but just before "Wake Up," the band's second song of the night, he cautioned, "We're not fucking around, St. Louis." He also recalled when the band nearly broke up onstage while playing the Rocket Bar many years ago and, just before last night's finale, declared how important it was in his line of work to be a professional. "If you want to play one-third of an arena, you've gotta keep it pro," Butler laughed.

* With band members constantly switching instruments and running off- and onstage, it was hard to keep track of people. But at one point, we counted thirteen musicians performing simultaneously.

* "Rebellion (Lies)" sounded especially strong last night, with the falsetto harmonies sounding truer than we've ever heard them. During the song, Will Butler (Win's brother) jumped from the stage and banged a snare drum while running up the stairs past section 104.

* Our media pass got us seats on the left-hand side of the stage, directly in line with the massive speakers. We're normally cool with this, but Arcade Fire had its bass unusually turned up to eleven, and the out-of-character reverberations blew out our ears, pounded our throat and tickled our feet -- in the bad way, people. We later left Chaifetz with a migraine and swirly tummy as souvenirs.

* With a little help from the makeup department, Butler could become a twin for Tom Hiddleston, who plays Loki in the Thor films.

* RFT Music took Arcade Fire's suggestion of formal wear to heart, with our writer in an iridescent violet prom gown and our photographer in a charcoal suit with no tie. But we were in the minority, as more attendees decided to wear animal masks or normal clothes to the show. St. Louis isn't a fan of dress codes, you know.

* The band closed the evening with a passionate, extended rendition of Chuck Berry's "Roll Over Beethoven," during which Win Butler descended into the audience while Will took vocals. Win posed on the soundboard stage for a few seconds before walking casually through the crowd, almost as if he were willing people to admire him.

* Arcade Fire originally was slated to perform at Verizon Wireless Amphitheater before moving the show to the much smaller Chaifetz Arena.