What a Concept: Dots Not Feathers and Volcanoes Talk About Their Upcoming Albums

When Eric Peters suggests a hike to St. Charles for a group interview, he does it without his signature hyperbolic flair. The message comes with the watered-down flavor of a gin and tonic that sits at the bar without so much as a sip taken. "I know the perfect place. They have a Mustache Monday. And it's kinda like a dark cave. And it's called Old Millstream Tavern." There is also a shitstorm of emojis that depict various natural disasters. And dolphins.

Still perplexed as to how a cave can be anything other than dark, we agreed to make the trek. Peters, his Volcanoes bandmate Jon Ryan and Baier are all friends. All three will participate in Baier's band's album-release show. A deep bill with disparate genres that ping-pong throughout, Baier's band Dots Not Feathers is the headliner, with opening sets by Volcanoes, Palace, Emily Otnes and the Weekdays, and Amen, Lucy Amen.

After he guards his tater tots from a ravenous pub hound, Baier explains the bill. "I love playing with bands with people I can talk to and relate to on a personal level so much more than playing with a band that sounds like us," he says. The pub hound retires to his master's feet and Baier continues. "I feel like it doesn't help breed this creative culture within our audience members, either."

Ryan, whose stoic countenance breaks only in laughter, says, "That's how [Volcanoes] always had to do it: Find a band with a similar energy and culture. People who like the same stuff. And it always works." Peters straightens in his seat, which causes the circular tables before us to stumble like a lit collegiate, and sums up Volcanoes' intent for the bill. "Our music is heavy and dirty, but it isn't angry. We needed an energy that was big and in your face with the positive party energy. We want you to dance, not beat up a stranger."

The tangible human elements of Volcanoes' upcoming concept album, Future Sorority Girls of America, are bolstered with a melodic-yet-distorted bass and schizophrenic percussion. Unlike Heavy Hands, Volcanoes' prior release, Peters' voice takes precedence and often feels like an action, as opposed to a necessary component of songcraft. "The vocals are much more modeled after Blood Brothers and Dismemberment Plan," he says. Often his delivery chokes on complacency and sputters inside a snobby delirium. "I also took a lot of influence from Sleigh Bells and Paramore." 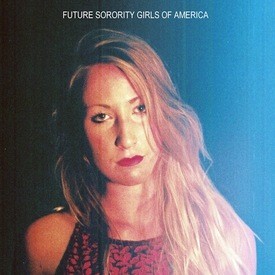 Future Sorority Girls of America is a satire on poor decisions young beta or omega women make in the presence of alpha females. Ryan elaborates, "The best indicator of what the album will be like is the first track. It's called 'I Never Could Swim.'" Peters picks up where Ryan trails off, "The pivotal line at the end of the song is, 'You were all sharks in the water, and I never could swim.' It's about living in the world that you could never survive in but being there anyway."

Peters pauses to take in his beer, then begins to describe a world not unlike our own. "It's about a high school senior named Krista who is trapped in this world that she knows is wrong. She's sinking slowly. The water in which she can't swim is this environment and these people that she is surrounding herself with. Ultimately her denial of her past, good relationships and cultivation of her new, bad relationships culminate in a fatal way."

Volcanoes and Dots Not Feathers have a key element in common: Both groups decided to create albums structured around a singular idea. Baier amalgamated inspiration from So Many Dynamos' Flashlights and Dirty Projectors' dexterous vocal arrangements and contradictory counts to create the contemporary classicism of Dolphin World's genre-absorbent indie-pop. "I didn't want to bill Dolphin World as a concept record," says Baier. "I wanted to see if people would pick up on it. And then slowly I think I just told too many people it was a concept record. It's about the redundancy of relationships." 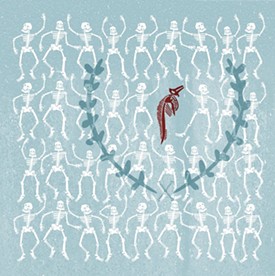 The first song on Dolphin World is "Timid Man," which reproduces reality like a fever dream. Upon first glance, the song springs forward with the eagerness of new attraction, Baier's guitar stings through the first verse . As Baier continues to describe the girl -- her hair, her ability to "bury [him] in language," and the similarities their fates share ("The guillotine is looking for us both") -- the song buries within itself the ramifications of investing emotions too early on. The rest of Dots Not Feathers pour in, adding hurricane percussion and assertive four-part harmonies after the second chorus. Once the song ends, desire is replaced by a request for reciprocity. Baier begs, "And I just want to hold your hand."

The first lyrics on the album are, "Last night I met the most beautiful girl that I'd ever seen," and the last song on the album is "I Don't Know If We'll Ever Be Friends Again." The linear track listing follows the relationship's cycle.

"Dolphin World is pulled exactly from my life," Baier explains. "It's written about two different people and these two situations. These two people created this emotional situation that allowed me to really tap into my emotions and my writing and what I had to offer in that construct." In one case, that construct was a near-fatal clash with a brown recluse spider. "'Between Dancing and Dying' is from the time when I had my spider bite. I got bit. and then I moved into my friend's house. They created this in-home nursing care for me. The doctors said, 'It's just going to run its course in 96 hours. Here's Vicodin. It's going to hurt really bad.'"

"I was super torn about it. It missed my vein by less than a quarter inch. If it would have hit that I could have been dead. I was just waiting for my arm to fall off. I just kept thinking, 'I'm a musician, this is what I do. I can't lose this arm.' So I was locked in this basement with my guitar and my friend's upright piano and every day I would sit there and demo songs. But I would be so messed up because of the painkillers. I would write these things, and I didn't really know where it was coming from." He stops and goes through the track list in his mind. "Half the album was written in that week."

Baier's band responded with the emotional and musical support he needed as he wrote Dolphin World. "I got really lucky. I'm surrounded by wonderful musicians who make me feel really comfortable with giving them anything to work with. Even if it's just a sketch and there are two chords I am playing. We're all super close. So a lot of the songs are more personal than I probably would have let on in the first place. Way more personal."

Between Dancing and Dying from Stephen Baier on Vimeo.

Dots Not Feathers' record-release show for Dolphin World is this Friday, April 18. Doors are at 7 p.m., and the show is at 8 p.m. Tickets are $7 at Plush. Volcanoes will also host a kissing booth to raise funds for its record Future Sorority Girls of America. In the words of Eric Peters, "We have hot friends."