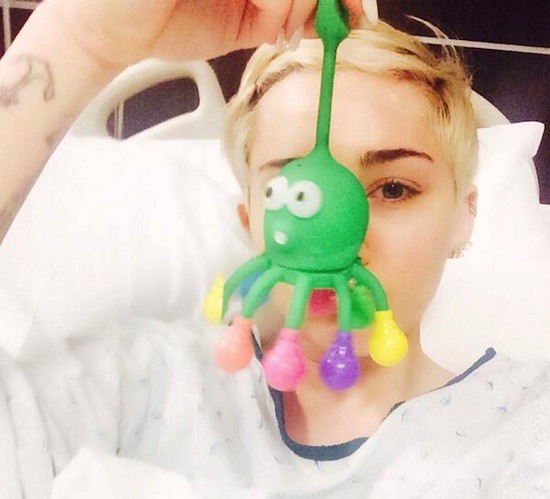 This morning, Miley Cyrus tweeted from her hospital bed that her highly anticipated show scheduled for Scottrade Center tonight will be canceled. Scottrade Center has confirmed the cancellation, saying that ticket refunds will be available at their point of purchase. Tickets purchased online or by phone through Ticketmaster will be automatically refunded.

Cyrus has been touring the country to support her album Bangerz, released last fall, but the former Hannah Montana star has been ill in recent weeks and was hospitalized Tuesday for a severe allergic reaction to antibiotics. Her team canceled yesterday's concert in Kansas City just two and a half hours before showtime.

Cyrus tweeted the bad news to St. Louis around 8 a.m.:

the hospital is sayin i wont b released today therefore Im not going 2 make it 2 St Louis. Im so sorry but somethings are outta my control.

As many of us know, being in the hospital sucks:

But the "Wrecking Ball" singer is making the best of her time there:

Mr. Octopussy & some amazing Drs are taking good care of me pic.twitter.com/7FJFxYa7M5