Six of the Most Underrated Songs of All Time 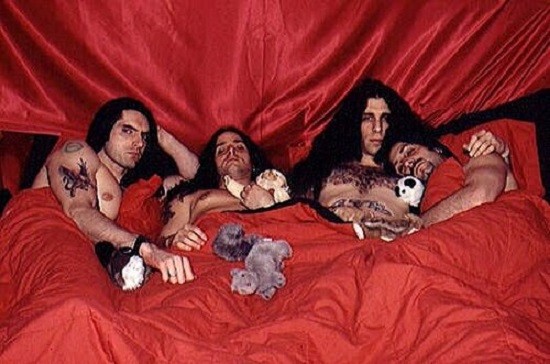 The world continues to burn, propelling artists such as Justin Bieber, Miley Cyrus and La Bouche to the top of the charts. Meanwhile, some of the most brilliant artists sit silently in obscurity. Sometimes people discover them years later and bring them to light through covers, or a hip-hop artist incorporates samples of an overlooked piece of brilliance and gives a slight revitalization to the track.

Whether it's a painting, a sculpture or a song, everyone can agree that it's a true tragedy when an important work of art seems to be ignored by the general populace. It's depressing. Devastatingly sad. It can almost be as difficult as "Unsuccessfully Coping with the Natural Beauty of Infidelity."

And with that, we are pleased to present Six of the Most Underrated Songs of All Time.

Hailing from Brooklyn, New York, the most commercially viable song by gothic warlords Type O Negative is by no chance one of the group's finest. This is a demented video featuring "that guy from the Ping-Pong movie," whose character plays dressup and convincingly channels pop-culture celebrities like Britney Spears, Eminem and Michael Jackson. By the end of the video, you will have firmly grasped the sense of humor of the band referred to as "The Drab Four."

World Coming Down, the 1999 album on which this track appears, is regarded as the band's most dirge-filled, painful release. Other tracks on the album include three ambient pieces ("Sinus," "Liver" and "Lung") which symbolize and ruminate on ways the band members may die. On "Everything Dies," vocalist Peter Steele sings about family members he has lost, and how one day he will also die.

Type O Negative had a sense of humor, but there was a genuinely depressive element to most of the band's work. The melodramatically titled "Everyone I Love Is Dead" is one of the most melancholy and catchy tunes that you can safely assume wasn't meant to be grim in a funny way. However, what is both grim and funny is the fact that Olive Garden advertisements play on YouTube before the track starts.

Before Type O Negative there was Carnivore, Peter Steele's thrash band in which he was the vocalist and played bass. You'll notice that this is the only Carnivore song that appears on this list. Though that band has written some very underrated tracks, it has also written some songs with questionable lyrics that will make you shake your head in anger. I don't want to promote those. Whether they were Steele's true expressions (he also supposedly wrote some controversial early Agnostic Front lyrics) or just written to garner a reaction, is anyone's guess at this point. I'm not going to make excuses for the guy. At the same time, I still listen to artists who have written some things in bad taste, like G.G. Allin and the Rolling Stones. Basically, let's just agree that most rock icons are insane and simply move on.

"Gravity" begins with one of the finest count-offs ever: "One, two, three, four/I don't wanna live no more." The song appears on Type O Negative's live album, Origin of the Feces, a record that initially featured Steele's actual asshole as the cover. But it gets better. The band was required by the label to produce a live album, but it had already blown all of the money. Instead, its members recorded a fake live album, set to sound as though it took place in a hostile bar with patrons that hated them, yelling, "You suck!" and throwing beer bottles.

Steele had a penchant for writing some offensive and terrible lyrics that firmly clashed with his listeners' politics. Misogynistic, targeting welfare recipients, offensive to women and homosexuals -- the green giant managed to offend nearly everyone. Rightfully, the band began receiving criticism and had been branded with some pretty heavy titles. Type O Negative's reaction wasn't to issue an apology and backtrack, though. Rather, it wrote even more extreme songs, like "Kill All the White People" (played live with an African American, Lord Nelson of Stuck Mojo) and the little ditty "We Hate Everyone," which features these choice lines:

"Some would say that we're biased/Accusations that we are racist/Well, shit comes in all hues/Now this means you/ 'Cause things ain't always like they seem/Like they seem/We hate everyone."

Probably Type O Negative's best-known song (and the one that really put the group on the radar of pale, gawky potheads wearing fishnets), "My Girlfriend's Girlfriend" is an over-the-top exploration of a gothic love triangle. And it sounds like the Doors. Maybe you get it, and maybe you don't. Something tells me Steele would prefer it that way.