Middle of the Map Fest Doesn't Disappoint in its Fourth Year

Four hours west of St. Louis lies a Midwestern city rife with curiosities. Its denizens may seem familiar to the eyes of St. Louisans, but the terrain is alien enough to mask itself in the guise of a pseudo-adventure. This place is called Kansas City, and the reason for the gathering is the Middle of the Map Fest.

Four years old, Middle of the Map boasts a carefully curated lineup full of musicians of all genres and aesthetics. During its three short days, festivals attendees overrun KC's Westport district. Cobbled streets shepherd musicians and fans to multiple venues within easy walking distance of one another. Average shows per night: seven. It is impossible, given the allotted word count, to recount every one I attended (and you don't want to read about the shit ones, anyway). Here are highlights from three puckish nights of endless aural delicacies, Boulevard Tank 7s, and the retrospective sense that something deeply personal happens to every person who attends the inimitable Middle of the Map Fest.

Ings: Curated by Inge Chiles of Plaid Dragons, Ings is a diary-to-stage project with an indie rock persuasion. Chiles sings like a farmhouse hen, full of animalistic chortles and yodels amalgamated with a saccharine timbre that suspends itself over her throwback sound. Her compositions tread lightly, with ukulele plucks and Nord keyboard clinks to accent her sound.

Night two is when Middle of the Map's dense schedule really started to get hectic. Har Mar Superstar was scheduled at 10:15 at Ernie Biggs, a four minute haul from Riot Room, where Paige Brubeck of Sleepy Kitty taught a clinic on the loop pedal -- plus, Dots Not Feathers was scheduled at 10:30. Har Mar, with sweat beads that trickled down his face from disco fever, is an egg-shaped man with a pectoral region sporting its own hairstyle. Har Mar Superstar (nee Sean Tillman) sings with a sweet candor and energy to spare. He eventually even took off his shirt and performed in a headstand.

I skated across several streets and parking lots and wound up at the Riot Room right as Dots Not Feathers galloped into "I Was an Eagle." The sextet's new songs are even more ambitious than those featured on Dolphin World. I was pounced on by a new friend who I ordered to watch DNF, and the look on his face said it all. He looked at me and said, "Holy fucking shit, you were right. These guys are fucking amazing." To which I replied, "Duh," and put my sunglasses on at night.

We arrived a little late to Del the Funky Homosapien. Earlier this month at SXSW, Del joined Gorillaz's Damon Albarn alongside Del La Soul to perform "Clint Eastwood." Nostalgia flips were switched, and after thirty minutes of dexterous freestyles and hundreds of beats from deck maestro Zac Hendrix, Del was asked if he wanted "the capper." "The capper," of course, was "Clint Eastwood." We all wanted it.

The last stop was S. Carey, who performed with the placid loveliness of a day at the lake. The seven count on "In the Dirt" was second nature to Sean Carey's archaic Wurlitzer. After a long day of venue bouncing, to prop oneself on a monitor and just listen was pleasurable enough.

STL's Palace opened for Kishi Bashi. Playing its second-to-last-show, emotions ran high as the mix ran low. Yet the crew of ragtag former thespians and ragamuffins tore around the stage like Peter Pan's Lost Boys. A poor mix will never rain on Palace's parade of rocket-fueled trumpet solos.

Kishi Bashi is extraterrestrial. On the outdoor stage, the sound ascended to a disorienting atmosphere that made the electric violin and three-part looped beats sound sublime. "Atticus, in the Desert" was particularly beautiful to hear in the twilight hours. Just when we thought the show was over, the band launched into a riotous cover of Led Zeppelin's "Whole Lotta Love." Sans electric guitar, Ishibashi's touring bassist played Jimmy Page's signature guitar licks, using a digitech whammy pedal. He also sang note-for-note with the same slick perversion as Robert Plant. Meanwhile, Ishibashi crowd surfed with a Go Pro strapped to a turquoise pole, filming the entire event. 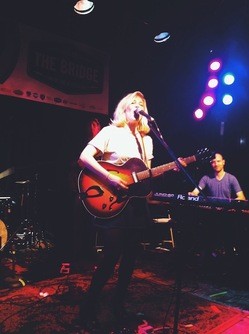 At the recordBar, Caroline Smith made every girl feel like a woman with a set spiced with sass. Smith and her two backup singers bopped and hissed tales of nascent womanhood with plucky come-hither coos of '60s doo-wop ingénues. "Magazine," and "Half About Being a Woman" were all too human. The boys who attended stared at Smith like school boys hot for teacher.

Why? was so packed at recordBar that the door was shut. Those inside were privy to a long-delayed set that saw Yoni Wolf and company shorten its act to a fan-favorite oeuvre. Wolf lurked about the stage and made penetrative eye contact with the front rows. He poured himself over us with his acrid spoken word. His monotonous timbre vibed over the band's live beats for "Strawberries," "These Few Presidents," and "The Vowels Part 2." The majority of the audience appreciated Why?'s groove, To view a packed established rock back and forth in unison as my glow necklace grabbed and pulled close to another's face bolstered the visceral nonchalance of the group's peculiar multi-cultural aesthetic.

Swaddled in the air of mischief and joined in a ferocious dance with desire and youth culture, Middle of the Map's fourth year running will live forever in my memory. I woke up the next morning and thought the same thingI did last year when I realized the show was over: "Damn. That was the fastest three days of my life."