Alarm Will Sound: "We've got a mission to make St. Louis our second home."

Alarm Will Sound paints electronica with all the colors of an orchestra. By arranging the works of composers like Steve Reich, Tyondai Braxton and John Orfe, the ensemble provides a live exploration of classical sound. Alarm Will Sound is a big band, twenty strong, with an emphasis on rhythmic drive and progression. Tonight, the chamber group will reach a milestone by performing for the first time at the Pageant, a venue usually reserved for pop and rock artists.

Last year the band played to a captive audience at the Sheldon, so bars and clubs aren't the typical space for an ensemble like Alarm Will Sound. But that's the point. It seeks to eschew assumptions and notions that it needs to behave or play a certain way. After all, in 2005 Alarm Will Sound released a full-length album of pieces born from the mind of Richard D. James (a.k.a. Aphex Twin) titled Acoustica.

Tonight at the Pageant, fans will get a chance to hear those Aphex Twin arrangements alongside "Radio Rewrite," essentially a love letter to Radiohead composed by Steve Reich. Tyondai Braxton, known for his work in seminal math rock band Battles, even arranged an original piece specifically for Alarm Will Sound.

We met with managing director Gavin Chuck to discuss the methods behind the chamber group in great detail. Read on as Chuck explains Alarm Will Sound and its deep connection to the city of St. Louis before tonight's big show at the Pageant. 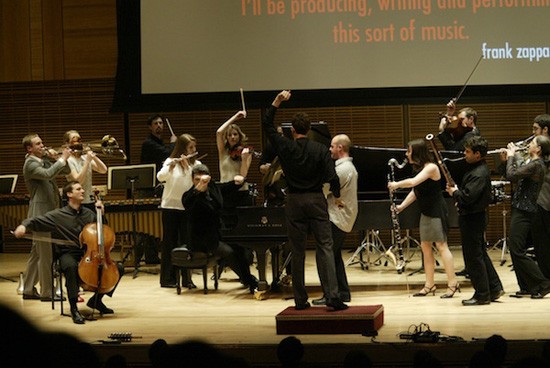 RFT Music: Alarm Will Sound performs a variety of pieces. Can you walk us through the types of songs in the group's repertoire?

Gavin Chuck: With Aphex Twin, in this case, those are preexisting electronic songs. Steve Reich and Tyondai Braxton actually wrote original songs for us. Those pieces were written for us in the last year, specific for Alarm Will Sound. The Aphex Twin tunes and some other electronica tracks existed before. If you're a musician and you love a particular piece, you want to play it.

How did Alarm Will Sound begin arranging the works of Aphex Twin?

It was actually was a really long process, and we've been playing these songs since about 2004. We spent a solid two weeks over Christmas break in rural Pennsylvania, where we had a residency.

What's really interesting about these songs is that they were originally played electronically, and the question was: How do you recreate a sound that was electronically conceived and play it on an acoustic instrument? So we just holed up, listened intensely and made translations from electronic into acoustic. Sometimes we would even go to junk shops to pick up items to make sounds that were originally electronic. At the show you'll see us playing oven racks. We even went to Home Depot and got some tubing that we twirl around to make sounds, so you'll see stuff like that.

We really tried to re-create, as much as possible, the original sounds and those translations ended up being interesting. People who are familiar with the original songs will get to hear them in a new way. Of course the translations aren't perfect, but that's sort of the point. The music was originally made for machines, and humans are here playing it, so we're bridging that gap. Something really interesting happens, a sort of transformation.

How do you get permission to make new arrangements of existing pieces?

We always write people to let them know what we're doing. First of all, we do it out of love for their work, and we want them to know how much we are getting out of it. It's always been about the response. Aphex Twin was the first kind of work we did in this direction. We contacted Aphex Twin and his publisher, and we made an album out of it. That album introduced us to a whole new audience. An audience that listens to electronica, but might not have heard electronica played live. It was a new experience for them and a new audience for us.

What has been the response from the artists whose music you've performed?

I think it's been positive. We started out with Aphex Twin and we keep adding others to our repertoire. Other artists we've asked kept saying yes. I think they know that what we're doing is interesting and it gets their music out there in a different way.

Read on for more with Gavin Chuck of Alarm Will Sound

Tyondai Braxton wrote a piece specific for you to perform, can you tell us a little more about that?

It was first performed at Carnegie Hall last year, and we played it most recently at the Metropolitan Museum of Art in New York, where it was choreographed. So we just performed that in February. In fact, there's a Youtube that just went up. That video also has lots of pieces that we'll be performing tomorrow night.

How does this year's performance differ from last year's?

For us, the Pageant is a new venue and, we hope, a new audience. In last year's concert we were playing the Sheldon. And we've had a great response from the audience that is used to going to the Sheldon and seeing music there. This time we wanted to put ourselves in front of a different audience, at least one that is new to us, and expose what we do to that audience.

The new thing for us here is the venue and audience. We've got a mission now, a year and half old, to make St. Louis our second home, and so we want to get out in front of as many different groups of people as possible. That's why this performance at the Pageant is important to us.

Where is Alarm Will Sound based out of?

St. Louis is the closest thing to a regular place that we work. And that's because we're really a band made up of friends. We've known each other since the '90s when we were going to Eastman School of Music, and it's been really important to us to stay together. This group is still, far and away, the original members. And so those people are spread out. We have people as far West as San Francisco, as far North as Montreal, as far South as South Carolina and some people in New York City.

We've had thirteen years of touring nationally and internationally, and we do that sort of thing without an address. We just fly to each place, gather and play for the next gig. In 2010, we started regularly coming back to Missouri and in 2012, we started to focus on St. Louis as a place that we would come back to regularly. We want to start building a second home, or a home, where we can come in contact with an audience on a normal basis and become part of a performing arts community in a specific space.

The catalyst of this is the support of Jeanne Sinquefield and the Sinqefield Charitable Foundation, and their mission to make Missouri a center of contemporary composers. There is a significant funding that comes from them. Beyond that, while Chicago might be the obvious answer in the Midwest, St. Louis is the smart answer. Because of the size, St. Louis is a place we feel we can have an impact and it can have an impact on us. We feel we can become integrated more quickly into the performing arts community. It's the right size. It's not so big where we would get lost.

There's already enough going on here with New Music Circle, Chamber Project Saint Louis, Opera Theatre of Saint Louis and St. Louis Symphony. There's a really rich cultural life here -- an audience that we feel is ready for the kind of adventurous programming that we do. So all those things come together to say it's a smart move to St. Louis as a place for us to really set down some roots.