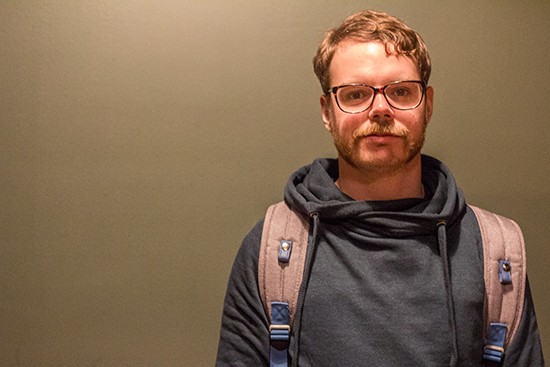 Zagk Gibbons takes a page or two from the book of modern pop artists. By stacking samples atop live guitar and keys, Gibbons effectively builds his songs bearing the force of a full band, and he does so alone. His newest EP, Nothing With the Letter V, is set to release on May 31, and Gibbons has shared with us a sneak peak of what's to come.

Gibbons stays very much in the realm of pop, but he infuses rock by fitting live drums between synthetic loops. His percussion feels careful and never muddies the cross-stitching of melodic riffs. That thoughtful intuition lends space to each song, and showcases his ability to build a whole greater than the sum of its parts.

Gibbons brings depth through introducing a few rough edges through the use of distortion. After all, he got his start more than ten years ago drumming for Belleville, Illinois, punk outfit Horshack. Since then, he's bounced from band to band while keeping with indie and rock genres.

"Well I've previously been an instrumental artist. Lyrics and singing are new to me. This album's lyrics chronicle this past year of my life, and some of my views on the events and hardships of that year," Gibbons says of his solo work.

The sample tracks from Nothing With the Letter V come loaded with deeply personal words, lending a pop vibe to songs that tend to feel a bit eclectic without the added human element of vocals.

Gibbons pulls it off live. He stalks from instrument to instrument, blending sounds into circular loops and ultimately tops the affair with classy, in-the-pocket drumming. Pop contemporaries might be content to hit play on a MacBook or flick open a backtrack via iPod, but Gibbons builds his sound like Lego blocks -- firm and colorful.

"I don't expect any handicap for being a solo act. I want to bring just as much energy and fun as a full band. I start every show with a sermon of loving each other, dancing and having a damned good time, because I sure as hell will be."

Click through as we ask Zagk Gibbons to "fill in the blanks." Oh, and concert details too, if you're into that sort of thing.

What I like most about St. Louis is... Lion's Choice.

I make music because... I have to.

I've learned the most from... my mistakes.

The St. Louis music scene could use... more fun, maybe a water-balloon fight.

The best post-show food in St. Louis is... Lion's Choice closes early, so Taco Bell it is.

May 31 @ The Demo Official Release Party