Outkast Will Be Performing at Lollapalooza: What Does That Mean for LouFest? 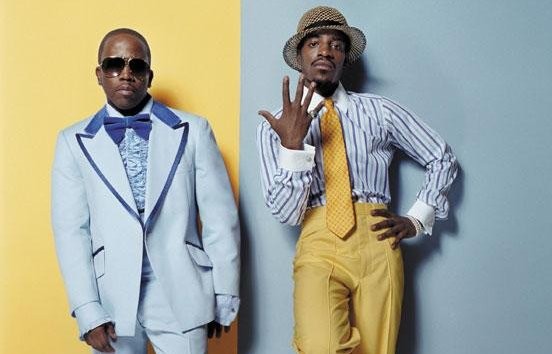 Lollapalooza is one of the crown jewels of the modern festival era. We may not love the lineup every year, but we certainly can see how, over the past decade, the Chicago production has redefined what a multi-stage, multi-day, multi-artist event can be, especially in an urban setting. The long-running Lollapalooza (which began as a traveling festival in the '90s) is what similar festivals often compare themselves to, especially newbies like the Summer Rocks events that may be hitting St. Louis next year.

It's a fun festival in a fun city -- now made even better with 100 percent more Outkast. For real. And we're salivating.

Wednesday morning, the Lollapalooza team announced the full lineup for this year's festival, scheduled for August 1 through 3 in Chicago's Grant Park. We told you last week that Lolla likely would feature Eminem, Skrillex, Arctic Monkeys and Kings of Leon as headliners, thanks to an information leak by Chicago Tribune music critic Greg Kot. But while we fastidiously corroborated those efforts with explanations as to why it was feasible for those musical acts to hit Chicago in August, we didn't add Outkast to our detective work.

To be fair, Outkast wasn't part of the Lolla rumors (unless you had really, really good eyes), but we should have seen it coming. In January, we reported that Outkast would reunite for a summer tour to celebrate twenty years of great music and energetic shows. And that's awesome news!

But not just for Chicago. St. Louis Outkast fans should care about this, too.

Though the aforementioned, Lolla-wannabe festival Summer Rocks isn't a done deal, the Gateway City already has a music haven ready to go. Our very own LouFest has upped its game every year since its inception in 2010, with its biggest acts yet -- the Killers, Wilco, the National, Alabama Shakes, Fitz and the Tantrums -- playing Forest Park in 2013. Why the big jump in talent in 2013? Because St. Louis' LouFest folks joined up with C3 Presents, a major talent and production company known for organizing massive events. The partnership increased attendance and helped put LouFest on the national must-see festival radar.

But what about Outkast? Well, here's the thing -- C3 produces not only LouFest, but also Lollapalooza.

It's not unheard of for production companies to use the same talent in multiple events, so having Outkast at Lolla means that C3 could bring Outkast to LouFest, as well -- especially because OutKast is primarily performing at festivals this year. However, Outkast is playing a four-day festival in England during LouFest weekend, but the guys are only booked for September 5. That means that Big Boi and Andre 3000 could fly to St. Louis for the final evening of LouFest on September 7. Probable? Maybe not. But it's possible. We can still keep our fingers crossed.

We've pleaded with C3 and LouFest before to lead Big Boi and Andre 3000 to St. Louis, but this Lollapalooza thing means we'll only get louder. MAKE IT HAPPEN, C3!

Beyond the headliners, Lollapalooza also announced supporting acts this morning, including Calvin Harris, Lorde, Foster the People, Zedd, Childish Gambino and the Head and the Heart. These are fine acts, but nothing that will make us drive to Chicago -- most of these performers have hit St. Louis recently or will visit soon, with Lorde playing the Peabody Opera House last week and the Head and the Heart playing Pointfest in May. See the full lineup at lollapalooza.com.