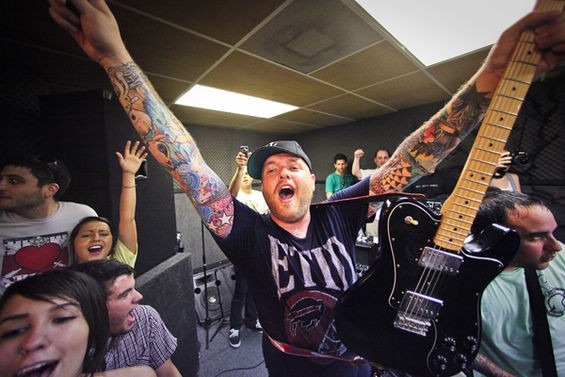 Former New Found Glory guitarist Steve Klein is the latest in a string of recent arrests and accusations that highlight a rare but underrated hazard in underground music: exposure to dangerous people. That's not to say all artists are as dangerous or deviant as Klein is accused of being. Fans who are lucky enough to meet their favorite musicians usually have a positive experience, sometimes even unforgettably so. Still, the economic, social and statistical realities of the music industry can sometimes foster a bad egg or two.

The music industry is a feast-or-famine business. There are only a few Taylor Swifts in the world who are in the very top crust of earners. Artists who want to play full time will have the best opportunity to earn money by touring. This usually involves playing for crowds of hundreds rather than sold-out arenas.

For the fan, this is one aspect of underground music which gives it so much appeal: access to the band. As one attends more shows at smaller venues, that random encounter with a favorite artist becomes more likely. Fans feel like they can relate to them, but often their loyalty leads them to overlook the fact that artists are also subject to human flaws.

We go wrong when we idolize artists. We develop an idea of what our favorite artists are like personally, as other human beings, because we feel a connection to their lyrics or their playing. For this reason, it can be easy to turn admiration for talent into trust in a complete stranger.

Most touring bands take a vow of relative poverty to play music for a living. That means many artists have to sacrifice a stable, full-time job and family in order to support a career that can barely support the artist in return. Everyday life is a far different social experience for fan than it is for the artist. Touring artists are surrounded by the sometimes draining atmosphere of concerts five to seven times a week. It means artists have to work harder to avoid things like alcohol or drug abuse and destructive sexual encounters.

Some bands may opt to address those issues "in-house" as part of a social code within the band. In the case of Klein, it's hard to tell if the rest of his band knew of any suspicious behavior prior to his firing for "personal reasons" in December 2013. He was charged for lewd acts with minor and possession of child pornography on the same day.

Still, fans should not take cases like those of Klein, As I Lay Dying vocalist Tim Lambesis and the horrifying deviance of Lostprophets singer Ian Watkins to mean that all musicians are likely to be shady people. In fact, most are just people using their talents to get by in life. In many ways, the lesson we learn from the outliers is common sense: Musicians are human beings, struggling through the challenges of life just like anyone else.