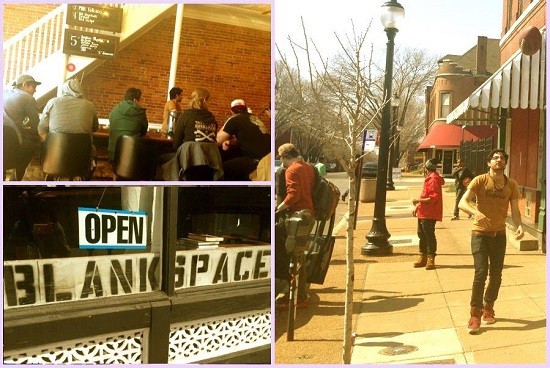 By Brian Heffernan Blank Space has become many things since hosting its first event on the 2012 spring equinox, including a tea house, an award-winning gallery space, the monthly host of a boogie-down dance party, a DIY punk and hip-hop venue, and a reading room. And this week, the chameleon-esque venue will become a two-year-old.

Beginning Thursday, Blank Space will throw a four-day festival to celebrate the anniversary. The venue will feature concerts Thursday, Friday and Saturday from artists including Teresa Jenee, Iman Omari, DJ Needles, So Many Dynamos, MNDSGN, 18andCounting and others (full show details below). On Sunday from noon to 6 p.m., it will host several pop-up retail stands for local bands to sell CDs, tapes, records and other merchandise.

This week's events set the stage for a number of building improvements and occupancy expansions to be completed by June, according to owner Kaveh Razani. Renovations include opening the building's second floor as a lounge, cafe and meeting space, where Razani plans to hold coffee and spirits tastings. Other changes would add a bar and stage in the basement, a second bathroom on the first floor and sprinkler systems in the basement and second floor to make the rooms legal for occupancy. Opening the extra stories will allow Blank Space to "double or triple" the number of events it can throw by hosting them simultaneously on different floors.

When RFT Music met up with Razani on Saturday, he was wearing work gloves, running on just a couple hours of sleep and hauling construction materials between questions. We asked him to reflect on the past two years of highs and lows at Blank Space, which have included winning a SLOUP grant in 2012 and being temporarily shuttered by the city government for not having proper permits in the same year. (Editor's note: The interview transcript has been edited for clarity.)

Brian Heffernan: One of the grand experiments you proposed for Blank Space in its infancy was whether you could open a place that involves and includes the neighborhood rather than gentrifying it. How successful do you think you've been at that?

Kaveh Razani: I think the nature of really being socially responsible -- to use a phrase I hate -- is just being open-minded and listening. I can't say that we're hitting goals and benchmarks, but it's not about that. It's one of those things that is near impossible to gauge if we're doing it well or not. You can always listen better, I guess is what I'm getting at.

Has there been one lesson that you have really taken away from these two years?

If it wasn't for the last minute nothing get done. There's no road map. We're like fucking Lewis and Clark (From an adjacent room, someone calls: "Get over it.") Get over it. That's it. I like that. That's our lesson. We had to get over ourselves. You can't plan for shit. The best thing you can do is set things in motion and then take things as they come.

Can we play time traveler for a second? If 2014 Kaveh could give 2012 Kaveh one piece of advice about Blank Space, what would it be?

Because the reality of the situation vastly, vastly outstrips what you're actually going to live up to. You tell someone something, and circumstances may not allow you to do that. I don't know if you've ever read the book Ishmael, but in that book there's this notion that human culture splits into two groups: takers and leavers. Those that left the world in the hands of the gods and those who took the fate of the world into their own hands. There's no such thing as a successful taker. You can't do that. You can't think you have any notion of what's going to end up happening.

To that point, what would you expect Blank Space to be in another two years?

I don't know. I think the whole point is to not expect anything. I think that's the lesson that we learned -- to not have any expectations about what's going to happen. You just got to take it as it comes.