Snoopify Is a Disaster That's Only Getting Worse 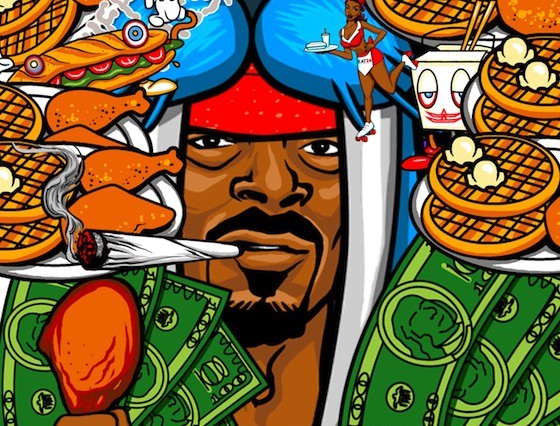 By Jennifer Swann Since launching in May, Snoop Dogg's Snoopify app has transformed millions of otherwise boring Instagram photos into virtual g-thangs, with the help of digital "stickers": blunts, cash money and chicken n' waffles.

According to a recent press release from its promoters, it boasts 3 million downloads and averages some 100,000 user-posted photos daily.

The really insane one....

You won't get high off of this blunt, needless to say. It will have the effect of marking you as a total sucker, however.

The latest version of Snoopify, which will launch in the near future (there's not a release date yet), will apparently incorporate an element resembling Snapchat.

We haven't had the chance to try it yet, but does that mean that once you've purchased your $99.99 virtual jay, it will disappear once you've sent it to someone, in ten seconds?

There will also be an in-application messenger function. What's next?

A Snoopfied version of Tinder, maybe? Swipe left for hell no, swipe right for some gangsta love.

Open up the app and an ad instantly directs you to buy Snoop's G-Pen, which also costs about $100 from Grenco Science.

A month after Snoopify launched, the Wall Street Journal estimated that Snoop took home about $30,000 in weekly sales, which would put him on track to make $1.5 million off the app alone, and that's even before he introduced the golden jay.

These new features seem likely to enhance his bottom line further, if not now then in the long run. Of course, it's all very hip-hop and entrepreneurial, but let's be honest: The app's outrageous fees aren't empowering anyone. Snoop has done plenty of things in his time to help out kids in the city, not least of which is his football league, but this is not one of them.

So kids, before you waste your money, we have some advice: Raise up off of that Snoopify bullshit.