Summer Rocks vs. Lollapalooza: By the Numbers 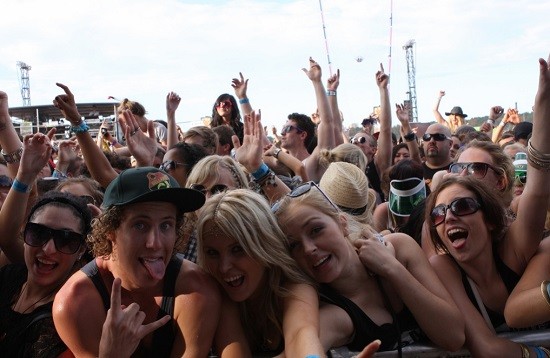 The biggest differences seem to be monetary and in the language that allows for existing events.

The renegotiated deal inked in March 2012 between the Chicago Park District and Austin, Texas-based C3 Presents and William Morris Endeavor guarantees that the city still gets $1.5 million each year, even if the festival doesn't take place. (C3 Presents also has a major hand in LouFest. RFT Music has made an open records request to see LouFest's agreement with the city as well.)

The Summer Rocks deal is not so lucrative. Under the current contract proposal with ICM Partners, St. Louis is granted up to $400,000 in payments for the use of city services, adjusted for inflation.

Now, to figure out what that means requires a bit of math.

The contract outlines what per-festival reservation fees are for Summer Rocks. If fewer than 30,000 tickets are sold, it's $50,000. Then it becomes part of a sliding scale of up to 10.5 percent earned from ticket sales, if more than 90,000 tickets are sold. This arrangement remains in place for the first decade of the contract. If the city extends its deal beyond the initial ten years, it gets a bigger cut.

Whether that's greater than or equal to the $1.5 million granted to Chicago remains to be seen. It's also worth noting out that Summer Rocks can, at any time, decide to pull the plug on the Memorial Day weekend festival and retain rights to Labor Day weekend, and vice-versa.

The other major sticking point with the Summer Rocks proposal has been the oft discussed no-compete clauses.

Lollapalooza's deal with CPD gives the festival exclusive rights to Grant Park until 2021, although it does grant a number of exceptions.

The contract strictly defines what are not considered competing events, including the Taste of Chicago, Country Music Fest, Gospel Fest, Jazz Fest, Viva! Chicago Latin Music Fest, Celtic Fest and any other annual music event that the CPD has held or permitted to be held in Grant Park in the past three years.

Summer Rock's no-compete clause exempts Loufest, Big Muddy Blues Festival, Fair St. Louis and the Annie Malone May Day Parade, grandfathering the events in. But the city of St. Louis already bid farewell to STL Bluesweek and Taste of St. Louis, which will now take place in Chesterfield. The festivals' organizers, local musicians and members of the St. Louis Blues Society all point their fingers at Summer Rocks.

What also remains to be seen is whether Summer Rocks is going to get into the business of "radius clauses."

Lollapalooza's radius clause has become something of an industry legend. Artists who sign on to perform at Lollapalooza are not allowed to play anywhere within 300 miles of Grant Park in the six months leading up to, and three months following, the festival.

The idea behind such clauses is that allowing artists to perform nearby would dilute the value of the ticket. It's commonplace within music promoting. You wouldn't see Wilco play a string of shows at the Pageant and then play the Peabody Opera House the next week. That's just bad business.

In my brief conversation with Steven Stogel last week, he said that he'd never heard of such a clause in any of his discussions with ICM, but he admitted that his knowledge of the music business is limited. Copies of artists' contracts with Summer Rocks and the terms of those deals aren't generally public. Radius clauses placed on artists over a mere two days during the summer could put a strain on St. Louis' still-burgeoning club and theater venue scene.

Continue to the next page.

Worth noting: The latest Lollapalooza deal was hammered out under current mayor Rahm Emmanuel's administration. The mayor's brother is Ari Emmanuel, the co-CEO of Lollapalooza co-organizer William Morris Endeavor (and the basis of Jeremy Piven's character in the HBO show Entourage).

Locally, real estate developer Steven Stogel is a major player in Missouri politics and downtown redevelopment. Stogel says he introduced ICM Partners to St. Louis city officials. Through his Clayton-based DFC Group, Stogel has participated in a number of publicly financed projects in downtown St. Louis, including the oversight of the $47 million restoration of the historic Old Post Office (for which Stogel's DFC Group partnered with Mark Schnucks' DESCO Group), and as consultant on the $75 million renovation of the St. Louis Central Library. His work helped spur a redevelopment renaissance and made himself (and a lot of other people) a lot of money.

Stogel was also cherry-picked to co-chair Governor Jay Nixon's Tax Credit Review Commission, which was formed to make the state's tax-credit system more efficient. Stogel even had a hand the redevelopment of the Gateway Mall, where the Summer Rocks festivals would take place.