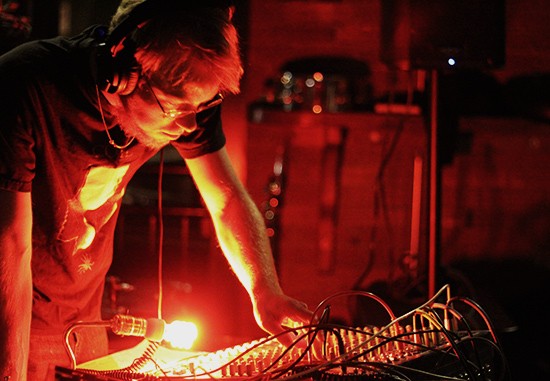 March tends to be the busiest month for music in St. Louis. Touring bands like to use our city as a segue to and from SXSW each year. Right now the River City is particularly jazzed on music festivals, but in this case, being on the way is much better than being the destination. Around this time every year, Austin, Texas becomes a crumpled sardine can of mostly terrible music and industry "peeps" trying to hock their goods to College-age kids and thirty-something "music lovers."

Maybe it's the fragrant stench of our fair Mississippi River or the classy metallic sheen of the Arch, but somehow St. Louis has attracted a good pile of noise-makers. Our top four picks feature an all-local festival of seedy punk and squalor, Robert Beatty of Hair Police, the second BRUXISM show and the mystic prog-rock of Wei Zhongle. If none of those names ring a bell, fear not; Everything comes laid out with links and video.

In the interest of not cheating avid fans of the experimental ilk, there are two shows that deserve a mention, despite my direct involvement (as a performer and promoter) in both: Legendary recording artist Jandek is performing at the Billiken Club on March 21. I won't spend time waxing poetic on why it's crazy that he's even playing here - you can read about why in this article by Mike Appelstein. The other show is the Britches release party on March 18 at Cafe Ventana. The gig features Guerilla Toss from Boston, whose latest LP Gay Disco received the highest accolades a noise rock band could on all corners of the internet.

This show is only technically 1/3 experimental, if anyone is keeping score. The Night Grinder locks thick, digital noise into danceable beats while throwing distorted basslines on top. Beauty Pageant is a raw noise party of scattered percussion, feminine howls and shrill guitars.

If the aforementioned bands sound a little too dense for your tastes, Animal Teeth and Tiger Rider provide snotty punk rock backup, which works as a good entry point into WEIRD FEST.

BRUXISM is the brainchild of Nathan Cook, who, by day, runs the Close/Far music label and, by night, performs under the moniker N.N.N. Cook. Through this myriad work, he has formed a distinct series that focuses on providing an ample entry point into the many realms of experimental music. With Catholic Guilt and Mr. Ben of Beauty Pageant on board, BRUXISM No. 2 looks to be a little rowdier than the first.

BRUXISM aims to provide an entry point into experimental and electro-acoustic music. Attendees will receive a free cassette, print or zine, depending on the month. Cook hopes to keep the series fresh by providing a different theme for each show.

"The main goal is to present a scene that can be somewhat mercurial and fragmented in a unified way, while maintaining and featuring each artist's particular vision," Nathan Cook says on the overall purpose of BRUXISM. "If that happens and people have fun and want to come back because they are curious about who will be performing next time, then I'll be happy."

On this night, catch both aspects of Beatty's work along with a strong roster of opening acts. CAM is currently showing works from Takeshi Murata, a video artist whom Beatty has worked with in the past. This serendipitous blend of sight and sound should feel deliberate and distinct.

Kevin Harris performs as part of the Audible Interruptions series, an exhibit built in collaboration with CAM. Local artists Nathan Cook and Andrew James both lend a hand to Harris on this night, making for a complex sensory experience.