After publishing this post yesterday -- which contains a map constructed by music critic Paul Lamere, who compiled information from the popular music-streaming service Spotify to determine each state's favorite musical act -- we got to thinking, and it seems to us that a map of the least popular artists by state is of equal import.

Dutifully, we got the RFT Music Department of Scientifc Study on the case immediately.

Research technically began almost ten years ago, when a younger me first heard "Crazy Bitch" by Anaheim, California's Buckcherry on the radio and immediately jumped out of my speeding car on the highway just to make the pain stop. This experience provided a solid foundation of institutional, experiential knowledge of the matter from the outset, leading my team and I to believe we were already close.

With this hypothesis formed, we approached nearby Washington University's research department, providing them with copies of Buckcherry's Time Bomb, 15, Black Butterfly, All Night Long and the band's most recent effort, 2013's Confessions. Wash U's researchers then flew in lab mice from each of the fifty states and played the albums for them, in a controlled environment. The results were telling -- 95% of the rodents subsequently ran head-first into the walls of their own cages, rendering themselves unconscious. The remaining 5% somehow got a lot of shitty tattoos and developed a fondness for date rape, as well as a severe addiction to cocaine.

See also: Six Terrible Bands I Would Fight if I Could

Intrigued by these findings, we then decided to mail copies of the CDs to interested scientists stationed in each individual state, and headed to the post office located just down the way from RFT Music International Headquarters in the Delmar Loop. Strangely, as soon as we started getting close, the adjacent statue of Chuck Berry -- whose name serves as the basis for the spoonerism that is "Buckcherry" -- began glowing red-hot. Its scorching temperature could be felt from across the street, and the closer we got, the more volatile it became. The danger came to a terrifying head when the statue suddenly and angrily removed its bronze penis from its statue-pants and began firing lasers at us, obliterating all of the CDs we had in our hands except for Confessions. We beat a hasty retreat, but logged fastidious notes about the encounter in order to bolster our research. Soon after, we were kicked out of the post office by an angry postal worker, after being told that it is illegal to send hazardous materials through the mail.

These developments were compelling, but we needed more.... 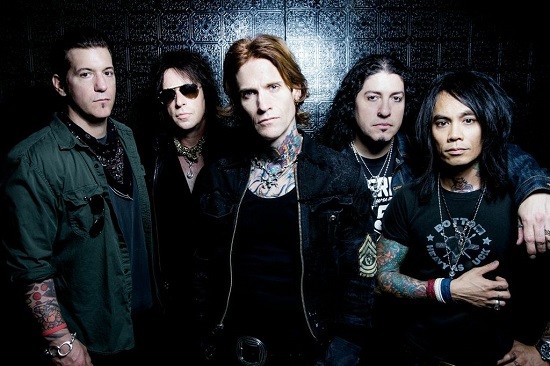 See also: The 15 Most Ridiculous Band Promo Photos Ever

Running low on options for methods of measurement, we resorted to the tests of 1692's Salem Massachusetts, and threw Confessions off of a cliff. It spiraled down, pulled by gravity, then stopped suddenly and rocketed back up into the stratosphere, having perhaps simply been rejected altogether by the ground -- or, maybe it cast a spell to save itself. When I returned to my office the CD was miraculously sitting on my desk, waiting for me. It began shaking and hovering when I entered, and a loud voice moved the very earth beneath my feet. "Klaatu barada nikto!" it bellowed, and in an instant I was covered in spiders -- tattoos of spiders, technically, and my legs were wrapped entirely in a two-legged tangle of trousered leather, which was difficult to see through the dark sunglasses I was now inexplicably wearing indoors. Confessions then flew out of the window, cackling as it disappeared into the distance, and I dropped to the ground and wept for my now hideously disfigured appearance.

Long story short, yeah. Buckcherry. Least popular band in every state. We looked into it. You're welcome.

This lunatic woman walked down the aisle to "Crazy Bitch," in the presence of families and children. Wonder how that marriage is coming along....

Continue to page three for the original bands-by-state map.