Langen Neubacher Wants You to Spend to Listen 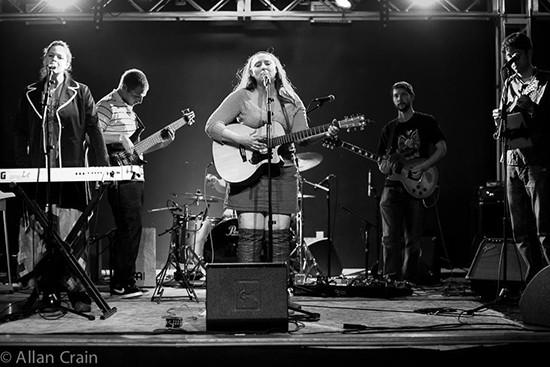 It's not hard to find musicians who stress the importance of "supporting the scene," but few back up that talk quite as well as Langen Neubacher. After providing a nurturing environment to up-and-coming artists as a co-host for Foam's open mic, Neubacher took her hosting skills to various venues in her monthly "Mic the People for the People" open mic event. Here she raised money for different charities while showcasing new talent.

Neubacher's latest idea to promote the St. Louis music scene might be her most ambitious yet: a local music listening discussion group and blog called Spend to Listen, which will hold its first event at Melt at 7:00 pm on February 23.

The members of Spend to Listen (note the initials) plan to meet once a month to talk about their favorite parts of the local album(s) they've recently purchased, while listening a few tracks. And the club does mean purchase; the one strict rule of Spend to Listen is that each member must spend ten dollars a month on local music.

RFT Music caught up Neubacher during her bartending shift at the Heavy Anchor to talk about Spend to Listen's goals, rules and the St. Louis scene in general.

Bob McMahon: What inspired you to do this?

Neubacher: Well, I've always enjoyed having some kind of community-related music project. And I used to do an open mic called "Mic the People For the People," where we would have the musicians and artists who wanted to be involved pick what local St. Louis charity they wanted to raise money for. And then we would host an open mic, just raising money for whatever place was decided on. But that just got to be a whole lot of work for not actually raising very much money for the organizations. This was just an idea I had to support the music scene the way I wanted to, but also be a much more manageable workload in terms of my organizing it.

In your Facebook rough draft of the rules, you say that Spend to Listen's members should only talk about the things they liked when discussing the music they bought. Why do you think it's necessary to have an outlet that only says positive things?

Do you ever worry that by only publishing positive reviews that your blog and club will lack credibility when compared to outlets that run both negative and positive reviews?

I think our blog won't have the same credibility as other more established blogs simply because we're not established. I don't think that it being all-positive necessarily will make us less credible. A big reason why I want the blog thing to be an element is I want bands to have good quotes to pull for doing radio mailings. Because a lot of times before you do your first record, it's really hard to get press clips. And so I feel like outside of St. Louis, nobody will know the difference between our blog and maybe blogs that do constructive criticism.

Do the bands you review have to be active? Or can you dig through the used section and review old-school St. Louis albums?

No, old-school St. Louis stuff is fine. As long as it's local and as long as you're actually buying the album. That's the only thing that I feel really strict about, because a lot of local musicians are just really sweet and they're willing to give you their stuff. Especially if they know that you're planning on reviewing their stuff and giving them attention, they're very willing to give it to you for free. But the whole point of this project is to generate money for the scene. So that's really the only thing I'm very intent about, is that the albums must actually be purchased.

In today's era where we have Bandcamp and Spotify and can therefore listen to something before we buy it, do you think Spend to Listen members should buy something just because it's from St. Louis even if they listened to an album and didn't like it?

I think that there is so much music here that if you don't like it, there is something else you will like to buy so that you don't need to just go spending money willy-nilly on things that you don't enjoy. I think there's enough different genres and enough really high-quality bands that... No, I don't think you should buy a CD you don't like, just because there will be somebody else that likes that CD and another CD that you like.

Do you think positive reviews are good for artists' self-esteem? Do you worry that it could come across as babying artists?

Is there anything else you would like to add?

Yes. While I do think our "be nice" rule might make us slightly less professional, I don't think that just because a review is critical it is more honest or of a higher quality. Unless criticism is constructive and intelligent then it doesn't have any more value that a well thought out positive review.