Ten Rules of the Rave: A Guide to Underground Dance Party Etiquette 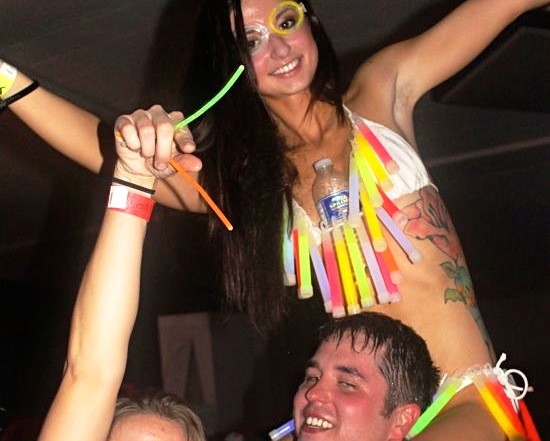 Electronic music's recent surge in popularity comes with serious side effects for underground-party aficionados. Suddenly, Daft Punk is winning Grammys, and drunk girls (and guys) are ruining life at 4 a.m. in a warehouse somewhere.

Take this recent incident: Under a haunting pink hue Dustin Zahn tended to his machinery, hands poised above the knobs. My body was carried by the sound, hips oscillating, hair in my face, arms outstretched, at worship. I was in ecstasy, but I opened my eyes to someone shrieking, "Can you take a picture of my tits?"

She pushed her smartphone onto a bewildered onlooker. Much to my dismay, he aimed its lens directly at her protruding cleavage and snapped a series of photos. Her drunken friend laughed, peering into the phone's screen and haphazardly sloshing half of her drink onto the dance floor. In short, the magic was gone.

I could spend time being mad at these random people, but that would ultimately lead to nothing but more bad vibes. After talking to friends and other musicians who experience the same tribulations, I have assembled ten rules for proper underground dance-party etiquette.


10. Learn what a rave is before you call yourself a "raver."

Your bros at the dorm call you a raver, as does the neon nightmare you picked up at some bar last weekend and are now dating. Sorry to crush your dreams, but clearing the dollar store of glow sticks and eating a bunch of shitty molly doesn't make you a raver. Raving is pretty sweet, though. The term originated in 1950s London to describe bohemian parties that the Soho beatniks threw. It has been used by mods, Buddy Holly and even David Bowie. Finally, electronic music hijacked "rave" as a name for huge underground acid house events that drew thousands of people and spawned an entire subculture. "Raving" is entirely centralized around underground dance music. Not Skrillex. Not Steve Aoki. Not anything you would hear on top 40 radio.

9. This party is no place for a drug-addled conga line.

I had just come in from enjoying a cigarette somewhere around 3 a.m. this past Sunday morning, carefully dancing in the direction of the DJ booth, when I was confronted by an obstacle: a strange wall of bodies draped over one another in a straight line, dividing the entire dance floor in half. These people weren't moving. In fact, I couldn't even tell if they were still breathing. Um. What? Can you please play statue somewhere else? Also, I am begging you -- save your conga for a wedding party or bar mitzvah.

Just accept it. The security is checking your ID for a reason. If your parents call the cops looking for you, then those cops will show up. If those cops bust this party and you are nineteen years old and wasted, then everyone responsible for the party happening is fucked. You'll probably just get a minor in possession ticket or something, and your parents will be mad at you for a week, but is it really worth jeopardizing the party itself? There are plenty of eighteeen-and-up parties out there. Go to those instead.

This one's easy. If you see me, don't hit on me. Don't grind up against me, don't put your groin area directly on me or really anywhere near me. This may come as a surprise, but I am not at this party to get laid or take drugs; I am here because I really dig techno and dancing with my eyes closed, and it is kind of hard to do that while you are screaming some nonsense into my ear and trying to touch me. If a girl wants you to hit on her, she will probably hit on you first. Social cues are a real thing.

6. The dance floor is not for conversations. Or Hula-Hoops.

I feel like this one should be pretty obvious, but apparently some people need a little help with the concept. You guys, it is really frustrating and distracting when people stand motionless in the middle of the dance floor and engage in conversation. You're kind of in the way. You're yelling at one another because the music is so loud, so everyone else can hear you screaming your heads off instead of the cool house track that we're trying to dance to. As for the Hula-Hoop thing...just please, do it somewhere else.

5. Don't turn this thing into an amateur hour.

People get high. People get drunk. Sometimes people get high and drunk and then wind up taking a piss in the corner or losing their pants. Do not turn this party into amateur hour. Getting so messed up that something awful happens is not cool or attractive or fun. "Candy ravers" take note: Too many drugs can kill you.

4. Do not take your shirt off.

Nobody wants to see your naked, sweaty torso. Nobody wants to rub up against it, either. Please spare us the torment of coming into contact with your soggy chest hair. No shirt, no shoes, no party. (No shoes at a warehouse party? That's just stupid)

3. Put your cell phone away. Especially if you are taking selfies.

Wow, your smartphone screen is really bright! You're standing right in front of the DJ with your face buried in its hypnotizing rays! This is rude, and also makes me feel very sad -- for your dependence on existing within this miniature computer while an entire party that you are privy to is happening around you. The disco ball is bright. The lasers are really bright. Stare at those instead! Oh and hey, if you are taking selfies on the dance floor, I hate you. Really. You and the stupid flash on the camera phone are ruining this for me. You can take selfies everywhere else, for all I care -- at Target, in the shower, while you're jogging, whatever. Take them at home, with your cat. Just not here, OK?

Are you kidding me? Are you that caught up in the moment that you are having lust-driven sex on the cold floor in the corner of a filthy warehouse? I asked several regulars on the local underground-party circuit what the weirdest shit they'd seen at these events was, and all of them provided gruesome tales of sex, even on the dance floor! What the hell is going on? I am so disgusted by even the idea of this that I wish these people would be caught and banned from partying forever. Just don't do it. Don't even think about it.

1. This party does not exist.

Do not post the address of this party on your frat house's Facebook wall. Do not Tweet it. Do not Instagram a photo of the facade of this warehouse. Do not invite a bunch of strangers. Do not invite anyone. The people you want to see will most likely already be there, waiting for you. This party does not exist. If it did, it would certainly be over with sooner than you'd like. Have some respect for the people who sneak around and plan these nonexistent parties by quietly allowing them to continue keeping the underground alive.

Next time I set out under the cloak of midnight to an unfamiliar address, lured by the promise of a special deep set, I can only pray that this list may have helped some of you establish better "rave" conduct. There's only one thing I was afraid to get into -- glowsticks.

I really don't feel like getting into a debate with a bunch of glowing "ravers" on LSD, so I'll just leave you with a gentle suggestion: In my world, the darker, the better.