Experimental musician Eric Hall's curious obsession with sounds began at a very early age. Technically, his first set up consisted of a mishmash of manipulated cassettes and turntables. He'd scratch his Smurfs records with gravel to bounce the needle, record his neighbors splashing around in a pool outside his window and would then play all these noises together, recording them on his dad's Dictaphone.

Over the years his tool set grew to include everything from Moogs, reel-to-reels and CB and shortwave radios to toys, contact mics and all manner of effects. Even though some of the jargon associated with his equipment is enough to make one's head spin (e.g. Ableton Live 9 with Max 6 on a 2012 MacBook Pro with Keith McMillen QuNeo and Akai APC40 and MPD32 controllers), he stays true to his simple, inquisitive nature.

"I record my neighbor telling stories on the stoop or people talking on their phone on the sidewalk and fold that into pieces. The squeaky hinge on my oven or pushing clunky buttons on an old Betamax player becomes a part of a beat," he says. "I listen to a lot of lectures on art theory or history in the background when I'm preparing for shows and think about that, and I listen to tons of music on any given day and that informs my ears a great deal, too."

From experiments on KDHX's (88.1 FM) airwaves in the '90s and a recent artist residency at Laumeier Sculpture Park to organizing variety show Third Lip Cabaret and performing with local improvisation group N. Nomurai, Hall's creative end knows no bounds. His long list of collaborators includes Damo Suzuki (of Can), Fontella Bass and Grandpa's Ghost. Still, he's well aware that his art, like any other art, isn't for everyone.

"I'm grateful for the people that actually listen to my work and dig in a bit, but I know most people don't really listen or get it or care, which is fine, too. No one's obligated to care about this," says Hall. "I know that my work doesn't fit in with what many people even consider to be music."

Hall's creative approach shares many elements with visual art. He cites cubism, futurism, surrealism and pointillism as examples of art movements he tried to realize sonically in past performances. Hall first performed his solo work publicly in 1999. Since then, the resulting evolution of sound art has taken on hundreds of different forms, as evidenced by Hall's massive archive of live recordings.

"I use live sampling to manipulate the phrases I play and build scenes from them, playing rough fragments of them over each other forwards and backwards and making odd-timed rhythm cycles at different speeds," says Hall. "Beyond that kind of premise, each piece just develops however it will."

Looking ahead, Hall has a few gigs booked (info available on the next page) and is working on remixes for bands as well as long-form interpretation of poet Roque Dalton's "Tavern" commissioned by Poetry Scores. The piece will premier at the Mad Art Gallery on December 12.

Hall records each performance and releases them for free digitally. Hear his latest annual compilation of recordings, Live Solos 2013, below.

We invited Eric Hall to fill in the blanks ahead of his show tonight at Foam with Gardener and Antl'rd. Read on to see what he had to say.

What I like most about St. Louis is... Eric Hall: Al-Tarboush.

I'm most inspired by... the new sounds I discover playing at home, Top 40 radio, and these birds that were nesting on the window sill outside of my bedroom until a storm knocked their home off.

The St. Louis music scene could use... I've been pretty out of touch for the last few years, now that I have a day job. I guess the scene could use less people with day jobs.

My first band/music project was... Jesus Christ Super Model, with Michael Marwit and Tazu Marshall. We had a slap-bass slow jam about being seduced by Jesus and another song about trucker CB banter called "Huge Poon." 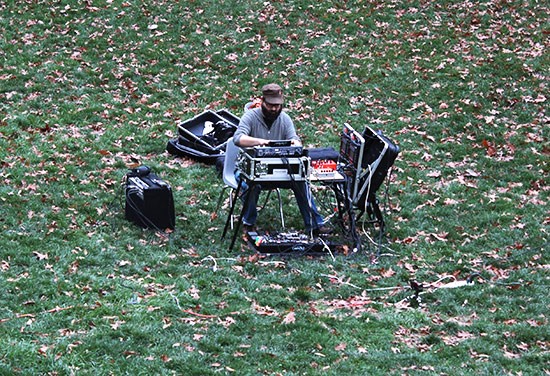 The best post-show food in St. Louis is... I usually go home and eat something simple afterwards, because I'm too tired to cook anything, so stuff like carrots and peanut butter, pineapple, green tea ice cream or baked pickle chips.

The most memorable show I've ever played... Last Spring I DJed a great dance party at the Looking Glass in D.C. I only knew a few people there, but those people knew all the best people, and it was packed and an incredible, massive celebration. I've probably never smiled so much partying with strangers.

For more on Eric Hall, follow his solo project on Bandcamp as well as his party-fueled pop music DJ project, Lil' Daddy Reba McEntire, on Soundcloud.

Fill In The Blank
Prev
Next