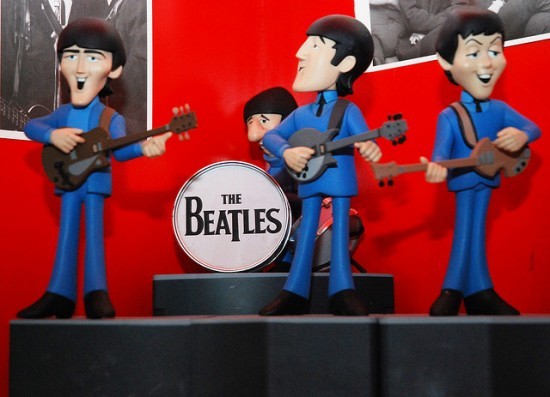 This month fans all over the United States have been reliving Beatlemania, thanks to the 50th anniversary of the Fab Four's defining appearance on the Ed Sullivan Show. Without a doubt, the Beatles majorly changed rock & roll in the early 1960s. Mop-top hair, smart suits, witty wisecracks, three- and four-part harmonies -- the Beatles had it all. But what really helped the Liverpool lads make their mark was taking the best of Chuck Berry, Elvis Presley and Buddy Holly and synthesizing it all into an earth-shattering sound that prolonged rock & roll's reign and paved the way for music's British Invasion in America.

St. Louis had just one chance to savor it all. After the band's live Ed Sullivan appearance in 1964 (which held the largest audience ever recorded for an American television program, according to Nielsen ratings), the Beatles exploded in the States, drawing thousands of hysterical fans wherever they went. The band eventually toured the U.S. in 1965 and 1966, including a date at Busch Memorial Stadium on August 21, 1966. The Beatles' sole appearance in the Gateway City occurred just days before they stopped touring altogether, and the eleven-song setlist featured some of the group's most enduring hits:

The Beatles appreciated the music that came before their own and regularly performed tunes by Gene Vincent, the Shirelles and Carl Perkins, as well as songs by Berry and Richard as shown in the setlist above. Taking a page from the Fab Four's book -- and seeing as how Paul McCartney, John Lennon, George Harrison and Ringo Starr are four of the most-imitated artists in rock history -- we've collected our favorite cover versions of some of the songs that the Beatles performed at Busch Stadium in 1966. Be sure to share yours in the comments.

One of the most influential rock & roll guitarists, Jeff Beck puts his stamp all over this Beatles tune. Beck rightly opens with the lyrics, "My love don't give me presents," but then he pulls a Frampton and makes the words nearly unrecognizable, thanks to his "singing guitar" technique. The song quickly morphs into liquid jazz riffs, harking only occasionally back to the Beatles' original backbeat.

Sweet Jesus, Otis Redding can turn any song in the universe into audio sex -- even one that's about drugs. Lennon once said "Day Tripper" was a nod to "weekend hippies," but Redding removes the trippiness and sweetens stuff up with soulful horns and fierce drums. The result is a shake-your-booty anthem that some say surpasses the original.

THE VENTURES - "I FEEL FINE"

The Beatles' original tune certainly comes through in the Ventures' version of "I Feel Fine," but it's a little, well, bent. Famous for dance-surf-rock, the Ventures foregoes lyrics and keeps its instrumental schtick, coating the Fab Four's famous riffs in bright sunshine and plenty of whammy bar.

When it comes to a heartbreaking song, it's difficult to top "Yesterday," but Ray Charles takes McCartney's wistful mourning and wrings the crap out of it. Charles uses his scratchy voice to alternate between tender wails and heavy pauses while squeezing tears from his piano. ALL THE FEELS, GUYS! Unfortunately, YouTube won't let us embed the video, but you can watch it here.

Paul Westerberg famously contributed "Nowhere Man" to the soundtrack for 2001's I Am Sam, but before that, he and the rest of the Replacements had performed the song during their shows in the '80s. The band speeds the tempo up a bit and adds some distorted texture, but Westerberg retains Lennon's confusion and helplessness as the narrator.

At first glance, glam-rock outfit Sweet doesn't seem like a candidate to cover the Beatles, but the band does a fairly faithful adaptation of "Paperback Writer." Vocalist Brian Connolly enunciates quite a bit more than McCartney ever did, making the lyrics sharper and more pointed. However, both this cover and the original share some uber-boosted bass, which comes through loud and clear during studio recordings and performances.