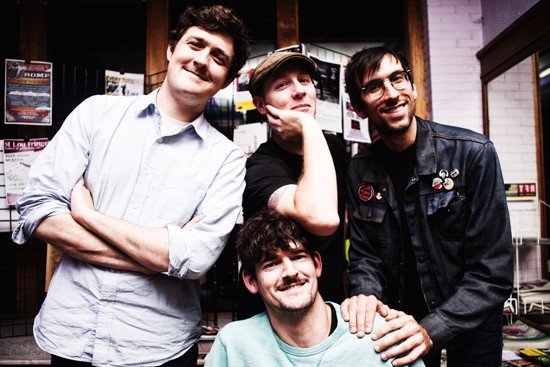 After a seven-year run that saw the band grace the cover of Riverfront Times and win many of our publication's awards, the Blind Eyes is breaking up.

"We had some time after New Year's to evaluate where we were as a band and eventually arrived at the decision to call it quits," writes guitarist/lead singer/main songwriter Seth Porter in an e-mail, adding that the breakup is amicable. "We've been playing together for a long time, and I think each of us is looking to get something a little different from a band at this point."

The mod-pop quartet is survived by its three excellent releases, full-length albums Modernity and With a Bang and last year's World Record EP. In addition to writing some of the finest pop-rock in town, the group is known for its four years of epic New Year's Eve shows in which it and another band opened the night with respective sets of originals before combining into a monster covers supergroup.

Most of its members also play in other bands. Despite still living in St. Louis, bassist Kevin Schneider plays with Springfield's garage-rock outfit Thee Fine Lines. Lead guitarist and newest member Andy White is starting a new punk band with his erstwhile Shame Club bandmate Eric Eyster. He also is still playing in hard-rock quartet Tilts, which recently completed a new album, Cuatro Hombres. It will be mixed by Ian Whalen and released this spring on Robotic Empire.

Porter isn't jumping into a new project again any time soon but says that he has been writing and is "definitely not done playing music." When pressed for details, Porter says that he's "interested in exploring some musical territory that wasn't really covered in the band" and adds that that includes but is not limited to different tempos, dynamics, arrangements and instrumentation.

Porter once sang in a Blind Eyes song that he always hoped to go out with a bang, and so the band shall with a final concert that will take place on March 15 at Off Broadway with Jon Hardy and the Public. The group plans to dust off some old favorites that it hasn't played in some time. "I'm really excited for that night," says Porter. "We've been fortunate to have great support for a lot of years, and I'm glad we'll get a chance to thank people in person."