Pink Sock is Not a Positive Influence on Your Impressionable Teenager 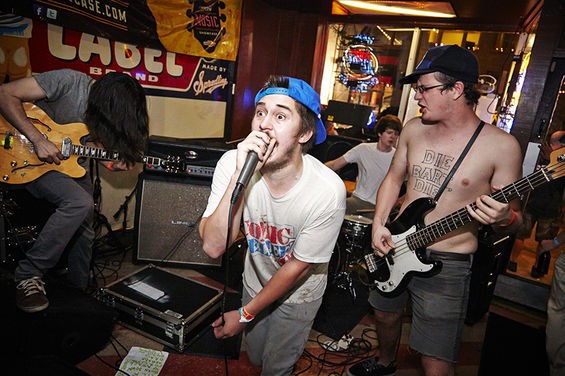 "It is a vehicle to make other people feel as unpleasant as we do," says vocalist Travis Hanrahan, speaking about his band Pink Sock. Hanrahan fronts the group by shuffling around like a stab-wound victim, airing all his grievances before eventually bleeding out. And he does, occasionally. Pink Sock can't seem to get through a full set without throwing fists, beer cans or bottles at each other. Nevermind the sweat, spit and puke that covers the venue's floor.

But it's not all doom and gloom. Pink Sock's self-destructive nature sets it apart from other hardcore bands in St. Louis. Highbrow music fans might call it "performance art" while the cretins would call it a party. Either way what Pink Sock does is genuine and honestly entertaining. Each song rarely exceeds one minute, but that's more than enough time to fire off a few shrill chords behind the scattershot punk beats.

"All of the songs are based in depravity," Hanrahan says. With titles like "Pill Cutter II" and "Some Holes," debauchery is implied. While Hanrahan might be eager to smear his own blood on the ground, he'll be the first to clean up the mess when the show is over. Pink Sock's hardcore has a catchy edge, and something resembling melody tends to peek out under all that guitar noise.

"Pink Sock has never been afraid of disapproval. It's way more fun to provoke, disappoint, and offend, rather than have someone actually enjoy themselves. That being said, we have never gone out of our way to do something like that; it's a natural process that sets us apart. Like a toad rotting," Hanrahan says.

Last month Pink Sock dropped a new demo cassette tape, and it has plans for a release through SPOTTED RACE, ran by Lumpy of Lumpy and the Dumpers fame. The band is working on its first seven-inch and planning for a tour this summer -- lofty goals for a group who responded to winning the RFT Music Award for Best Hardcore Band by slinging meat at a live audience. This gesture got Hanrahan and company quickly beat down and thrown out of the Atomic Cowboy.

We asked all four members of Pink Sock to "Fill in the Blank" ahead of their plans for 2014. As it turns out, Pink Sock answered as a single entity. The answers are short but appropriate coming from a group whose live set is usually over before your standard rock band can finish one song. Click through for the interview.

What we like most about St. Louis is... how everyone pretends they don't do drugs.

We make music because... we had a bad experience at a Dairy Queen Braizer.

We've learned the most from... Caddyshack and The Simpsons.

The St. Louis music scene could use... more dudes.

The best post-show food in St. Louis is... Mickeys and Whiteys and pills.