On Pop Music and Violence Against Women

I can't stop thinking about Rihanna. Her single, "Stay," came out a year ago this month and it's still omnipresent. I'll hear it on the radio, in the grocery store and played on the jukebox at a bar by some sad bastard with no concept of appropriate public drinking tunes. The song won't go away, and neither will my conflicted feelings about Rihanna, her life and her music. Just like many others, the thing I most associate with Rihanna is the horrible act of documented domestic abuse she endured at the hands of her then-boyfriend, singer Chris Brown, in 2009.

Whenever I hear "Stay," I get all twisted up inside. That's kind of the point of depressing songs, anyway, but there's an extra layer of icky-feeling that builds up inside of me. I love the song and think it's pretty amazing, actually, but it also kind-of makes me feel nauseated. I think it's because of those pictures. Whenever I think about her, I can't help but think about violence against women and some of my friends who have survived it.

Should I let the personal lives of pop stars influence how I feel about their music? No, that's silly. They're just pop stars. Who gives a dick about their personal lives, anyway, right? Well, sometimes I do. I wish I didn't, but I do.

I'm one of the few women I know who has never been seriously assaulted. I've never been raped, I've never been a victim of violent crime and a man has never to raised a fist to me in anger. While some might say that's because I'm aware of my surroundings or I'm tough or I'm too smart to get trapped in a bad situation: They are wrong. I am just lucky. That is it.

I have, for sure, faced sexual harassment and unwanted sexual advances. This happens at least twice a month and it's usually in public places and is perpetrated by strangers. Inappropriate words spoken to me are usually countered with harsher words from me. And any fools who have dared to touch, grab or pinch my body parts without permission have experienced the swift smack of my hand to their face. Maybe that's not wise, but it's my automatic reaction.

And as a younger female music fan, I had plenty of women to look up to— my generation was particularly lucky to have Riot Grrrls as our honorary big sisters. The Riot Grrrl movement was a new wave of feminism that encouraged women to be smart, strong and safe. Their "take-no-shit" message was spread through various formats: art, 'zines and, especially, music. "Riot Grrrl" eventually became a dated tag applied to any young woman out to express her opinion, especially if she was at all angry or "nervy," but the scene stands as a small, yet powerful cultural revolution.

I don't mean to be all "get off my lawn," but I don't see anything like this in modern music. Sure, there are strong women, but they aren't organized together and don't seem to support each other in the same way. It seems as though most of the current big-name women entertainers are pop stars, not rockers. But sometimes rockers pay attention to pop music, too.

Just last week a I watched a video of Patti Smith covering Rihanna's "Stay" at Smith's 67th birthday show. From the stage, Smith described the song as "the 2013 song of the year." Smith is a hero of mine, and this made my weird obsession with that song feel justified.

After watching Smith sing her heartbreaking live version, I looked up Rihanna's official video for the song. Despite hearing bits of it approximately 100 times, I'd never seen the video. (I'm a music person, not a TV person.) And guess what? The video made me feel even worse about the whole goddamn thing. It's Rihanna, vulnerable and naked in a bath tub, and there are lots of close clips of her face as she's singing. In these tight shots, what I assume to be a scar from the Chris Brown attack shows on her top lip. (It's in the same place where her lip was broken in the police photographs.) Her pretty face, all scarred up, as she's singing, "I want you to stayyyyy..." 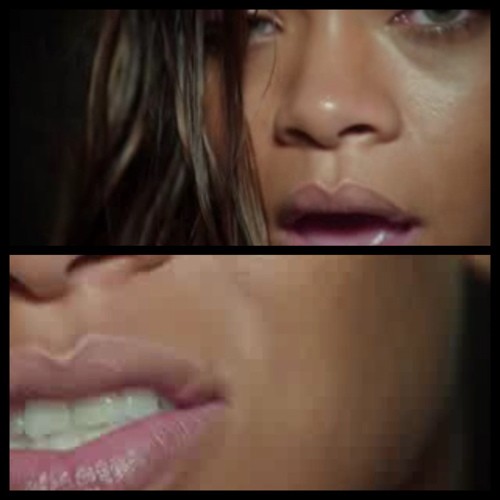 While we adults might have the ability to separate the artist from the what we perceive as the message (or realize that a song might not be autobiographical — Rihanna didn't even write "Stay"), younger fans can't be expected to analyze in the same way. This song, and her defensiveness of Brown in the months following the attack, might best serve as insight into the psychology of an abused woman and the systematic and powerful methods of abusers.

Many people (mostly parents of little girls) were pissed that Rihanna seemed to make excuses for Brown in interviews following the incident. They argued that when you're an entertainer, you forfeit the right to deal with this kind of public situation in a private manner — you may not defend or in any way stand by your abusive boyfriend. Parents argued that Rihanna was a role model and that sometimes entertainers actually do have a small responsibility to set an example for their younger fans.

I don't mean to blame the victim, but I, too, was disappointed with how that all played out. But I don't necessarily think that it's Rihanna's job to provide guidance to to young people and I wouldn't rely on any pop star to relay that message properly, either. So when this particular abuse story became public, I felt the need to talk to my pre-teen little sister and make sure that she understood the situation. I wanted to make sure that she didn't think this was acceptable. I tried to explain to her the complicated and convoluted thought process that is common in victims of abuse. And I wanted to make sure she knew that Chris Brown is an asshole.

I can be reactionary, and if I had been a fan of Chris Brown I probably would've gotten rid of all of his music upon seeing those horrifying photos. I'd like to think that I couldn't be a fan of a man who would do that kind of thing to a woman — but it's simply not true. Many, and I mean many, of my favorite artists are unsavory characters at best. Most of them probably have morals that aren't in agreement with mine. And if I think about it hard enough, some of them are known woman abusers.

My music collection contains absolute shitloads of jerks, creeps and murderers. In my personal life I have a zero-tolerance policy for men who hurt women, children or animals. I don't believe in rehabilitation for crimes against these groups, either. I'm of the opinion that men who cross these boundaries once will cross them again. But apparently this hard-line stance doesn't apply to my musical tastes. And if you think that every musical artist you love shares your same values, however serious or trivial they may be, think again.

I'm from St. Louis, which is probably considered a land of misogynists and apologists to outsiders because of the adoration we openly give to our hometown musicians like Chuck Berry and Ike Turner — both known enemies of women. But still, I have tons of tunes by Berry and tracks from both Ike and Tina, separately and combined. (Tina Turner, another badass woman who was famously a victim of abuse.) Michael Jackson is in there, too. He was accused multiple times of inappropriate relationships with children, but that didn't stop him from being the biggest pop star in the world and having the majority of humans continue to hold him like the river Jordan. And though some referred to it as a "rape anthem," I've been known to shake it to Robin Thicke's "Blurred Lines." Shit, even Charles Manson made some good tunes.

Phil Spector had a big long history of terrorizing women, until one day he finally went to prison for killing one. But that doesn't stop me from cranking the dial up to maximum volume any time I hear "Be My Baby." I think "Be My Baby" is the best song ever written and whatever Phil Spector did or didn't do in his life seems like it will never dampen my love for that song.

R. Kelly is accused of preying on underage females, which is particularly disgusting. (The Village Voice recently ran an excellent interview with respected music critic Jim DeRogatis on the subject.) But when I hear R. Kelly I don't usually think about his scandals. In fact, I've worn a necklace repping R. Kelly's "Ignition (Remix)" nearly every day since I got it last year. I love that necklace. And I love that stupid song.

There's a common criticism of feminists that we're too serious or can't take a joke or that every "little thing" doesn't have to be a fight, but I think some things are worth fighting for and that it's always appropriate to have a discussion about the safety of women.

Logically, I don't think that a pop star's personal life should influence how I feel about their music, but clearly, it's still an issue in my life. Maybe it shouldn't be, but there's something that's uncomfortable for me here. And when I'm uncomfortable I speak out. Or scream. Many thanks to the Riot Grrrls for teaching me about the power of the female voice — I intend to keep using it.