Prince Blesses The New Girl, Forces Us to Watch This Stupid Show

YOU GUYS! I ACTUALLY WATCHED THE NEW GIRL FOR YOU! ASDFGHJKL;!

First, a little context. I hate Zooey Deschanel. Yeah, she played LouFest that one time and I know that some of you adore her, but I seriously can't stand her precious twee ways, her cotton skirts, her giant eyes and her abhorrent "singing." I know, I know: I have issues.

But until eight gazillion commercials featuring Prince and Zooey cuddling aired during the Super Bowl, I totally forgot that The Artist Formerly Known As Prince But Once Again Known As Prince was a huge fan of The New Girl and had worked his way onto an episode of the show. And here we freaking are.

If you missed what surely ranks as one of the worst post-Super Bowl episodes of any show in the history of forever, you're lucky. But if you're curious about the purple crapfest, here's what went down:

A bunch of guys -- Zooey's roommates, we learn -- are arguing over who will pick up Zooey's panties. "Panties." They're saying "panties" over and over. This already is stupid. And then Zooey walks in. OH MY GOD, ZOOEY'S MOUTH MAKES WEIRD NOISES WHEN SHE TALKS ABOUT PRINCE. Zooey and her friend Cece somehow have scammed an invite to a party at Prince's house. They dance awkwardly to celebrate, and Zooey points out her underwear. Or panties. Whatever.

Later, Moonpie Eyes wears a stupid sequined shirt while debating which shoes to wear to Prince's party. Nobody really gives a crap. Rightfully so.

Zooey gets into the limo that Prince sends and in her weird voice laments not having long legs to fit the length of the car. Ummmmm, OK. Her boyfriend (Nick?) wishes her well and says he loves her, to which she painfully responds with finger guns and not "I love you, too." She's demented. Go to your stupid party, Zooey. 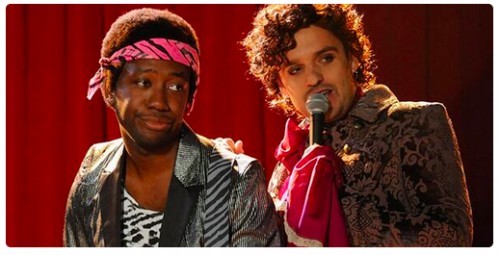 Now the guys are at home wondering how to say "I love you" without freaking out their ladyfolks. Oh, god, they're hatching a plot to crash Prince's party and help Nick "take it back." You know, because Nick can't wait three damn hours for Zooey to come home and have an adult conversation. Oh, and now the episode is becoming a commercial for Ford Fusion's excellent gas mileage as they drive to Prince's crib. This is ridiculous.

At the party, a shorn, newly-hot Clayton Kershaw of the Los Angeles Dodgers hits on Zooey, but she's not having any of it. Maybe she's offended that he doesn't read Hello Giggles. Her penis-endowed roommates are outside trying to get into the party, and there's a whole "This guy saved my life" thing with fake crying that's moving the dumbass bouncer to let two of them in. What? Seriously? This is dumb. Everyone knows you need to slip $5 bills to bouncers. And now Z's boyfriend shows up to the party with some models. WTF.

Ugh, more talking. Zooey doesn't know how to talk; how is her voice this annoying? Nick finds her, and she's trying to say "I love you" but falls down drunk. Wait, not drunk -- panic attack! Oh, that makes it funnier, then? Our friends with legit panic attacks are laughing their asses off, we're sure. Zooey's pals now are babysitting her outside, and Nick is taking the "I love you" back. But she loves him for real and can't say it! Confusing wacky sitcom hijinks -- so original. WHERE THE HELL IS PRINCE? WHY AM I WATCHING THIS SHOW?

The lovebirds ditch their friends so they can discuss this "I love you" thing alone. Well, alone except for Prince, who FINALLY shows up to give them advice -- but not before some elitism. "How rude of me, I haven't given you enough time to freak out now. You may do so now." Yes, Prince, please give these idiots more opportunities to show us how ridiculous they are.

Watch me get shut down tonight on @NewGirlonFOX tonight after the Super Bowl! #NewGirl #SB48 pic.twitter.com/Kdo2DQva2W

Zooey, Nick and Prince are sitting awkwardly on a bench, with Prince in the middle playing mediator. The dimwits are explaining "finger guns," and Prince thinks it's appropriately dumb. Nick sadly leaves at Prince's request, and the Purple One asks Z if she likes pancakes. Because of course.

Elsewhere, one of the guys is running from the bouncer and hides his face in Cece's boobs. Do they have some kind of history? Nevermind, I don't care. We go back to the other friends, and everyone is drunk -- especially Nick, who comes over to complain about Prince absconding with his girl. Nick also cockblocks his friends who are macking on models, and now he wants to dance. What the hell is wrong with these people?

Prince and Moonpie Eyes are eating pancakes in the kitchen. She calls Prince stupid as he tries to give advice, and he compassionately forgives her in an absurdly soft voice. How is Zooey not sucking face with him already? Ugh. She does the girl thing where she claims to be very full, but he forces her to finish her pancakes. Now it's time for a Zooey makeover, because Prince has a wardrobe full of women's dresses or something. This and ping-pong and butterfly watching are supposed to loosen her up on the idea of love somehow. And then Prince locks her in a closet. Good. 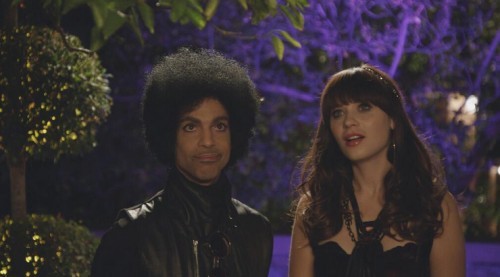 Prince urges Zooey to find Nick, whispering something in her ear. WHAT IS IT? Come on, this shit isn't Lost in Translation. Whatever, Prince.

Zooey's housemates are smiling with lemon slices in their mouths; this easily is the best thing on the whole stupid show. Zooey floats down the steps in her special, precious Zooey way and finds her boyfriend dancing on the floor like an idiot. He confesses that he's not sorry he said the "L word," and she whispers in her ear. And then she shouts. Because she's Zooey and it's cute, or something? Anyway, she says that she loves him, too. Quelle surprise. They kiss, Nick notices her weird Prince dress, and the Purple One beckons her to the stage. OH GOD, SHE'S SINGING! WITH HER STUPID ZOOEY MOUTH! STOP THE MADNESS! Prince does his new song "Pretzelbodylogic" with her (Or is it "Don't U Wanna Fall In Luv 2nite?" We're getting conflicting accounts.), her friends rush the stage uninvited, and everybody shits on The Purple One's excellence.

After the party, the gang of idiots sits around exhausted, disbelieving that they danced with Prince. They determine that Prince is magic and wonder how they'll live their lives now that they've been in the presence of greatness. But they're missing someone -- Zooey's friend Cece is still back at Prince's house playing ping-pong. With Prince. Because he needs more ping-pong friends. 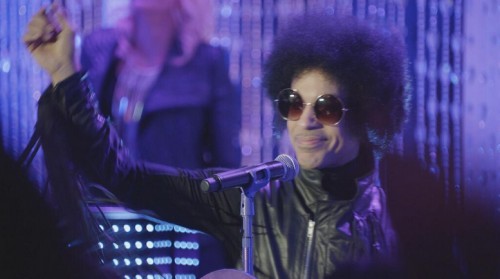 Cripes. Screw you, The New Girl. This doesn't come close to measuring up to the post-Super Bowl standard that "Friends" had set. This ridiculous Zooey show is exactly what happens when doves cry, only now I'm crying, too. THANKS, PRINCE! THANKS, OBAMA!