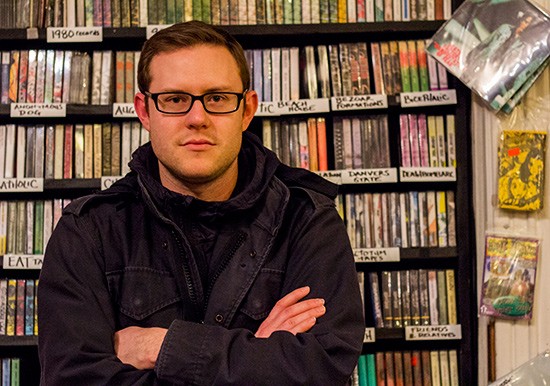 Nathan Cook wears many masks. As the head of the local Close/Far label, he produces digital albums and limited-edition cassettes, curating an expansive sound through his compilation project, Rhizomatic St. Louis, and working with musicians from in and outside the city to fill a small but essential niche for experimental music. His latest project, BRUXISM, is a monthly concert series hosted by Apop Records on Cherokee Street. This Friday, January 31 marks the first in a year of nuanced, ambient shows at the local venue.

"[Close/Far and Apop] are both approaching ten-year anniversaries in our involvement and support of adventurous, difficult and odd music," Cook says. "The series is a way to bring together and celebrate many of the fascinating artists in the community working in peculiar modes that relate to the label and the shop."

BRUXISM aims to provide an entry point into experimental and electro-acoustic music. Attendees will receive a free cassette, print or zine, depending on the month. Cook hopes to keep the series fresh by providing a different theme for each show.

"The first one is all about the shift in noise and drone over the last couple of years away from a more static and textural approach into heavily rhythmic styles that are appropriating and distorting various dance music templates," Cook elaborates. "Everyone performing this Friday will be displaying their own personal type of rhythmic, electronic music."

Friday's show features the Night Grinder and Wamhoda -- two artists who've both branched out from noise and packed their sounds into something more akin to dance or kraut-rock. Chad Hickman of the Kingston Family Singers is set to DJ, lending his inventive live-mixing to the tone of the evening.

While helping others to spread their art through his label and booking shows, Cook somehow finds time to moonlight as N.N.N. Cook, a noisy alter-ego known for its gripping live show. Constantly changing with each performance, he defines what it means to be an experimental musician by barring structure and repetition, crafting music on the fly -- which essentially makes every live gig a one-night-only proposition. His personal work involves field recordings, homemade electronics and other methods to create an ambiance littered with subtlties.

Being both a practicioner and a fan of this music provides the skill to curate BRUXISM in a way that feels open and inviting to newcomers, while still bringing fresh ideas for old fans. Cook will help kick off BRUXISM by performing in Lobster, his duo with local synth-artist Kevin Harris.

"The main goal is to present a scene that can be somewhat mercurial and fragmented in a unified way, while maintaining and featuring each artist's particular vision," Cook says on the overall purpose of BRUXISM. "If that happens and people have fun and want to come back because they are curious about who will be performing next time, then I'll be happy."

We met with Nathan Cook to discuss BRUXISM more in detail. Click through for the Q & A.

RFT Music: Bruxism, by definition, is the involuntary grinding of one's teeth. Why pick that name for this concert series?

Nathan Cook: Well, because it's something that occurs subconsciously while one is sleeping and is sometimes the result of pent-up anxiety or stress. I think it makes sense in the context of the series because it relates to the intensity of the music. It also pertains to the way many of the artists in the series manifest work that is very personal and sometimes it stems from a troubling, unstable, or agitated source.

Each concert will offer either a free cassette, zine or print. How do you determine what will be given away to attendees each month?

By what the particular artist is interested in producing and sharing at the time. Wamhoda has been making many drawings and prints ranging from monsters to textural color field prints that are quite nice in a mildly disgusting kind of way. So it seemed natural to present that kind of new and spontaneous material.

The show after this one will likely feature a cassette of some kind. Ideally each published edition will showcase the best new ideas and work from those involved.

The Kingston Family Sound System, aka Chad Hickman, will be guest DJing for the night. What should one expect from a DJ set in this concert series?

Chad is an obsessive record collector (which makes for a great DJ) and has a wide spectrum of music in his collection. His record selecting is fun and unpredictable with fast and lively mixing. The DJs for the series will be selected with an emphasis that they are not just providing musical wallpaper but are thoughtfully contributing to the atmosphere of the show.

What do we have to look forward to in future months of Bruxism?

Some of the other themes will likely be performance art, Free Jazz night, and possibly a video/film exhibition. There will be a new cassette for the next show and a new zine featuring many artist interviews after that. The compilation tape Rhizomatic St. Louis Vol. 3 that I've been producing annually will be coming out in March or April so it could be a good vehicle for the release show. Look out for updates here: www.close-far.com and www.apoprecords.com.

This concert series is aimed at a certain niche in St. Louis music, so how will you determine if the shows are successful? What goals do you have in mind for Bruxism as a whole?

Tiffany Minx of Apop Records: [St. Louis] functions as such a small town sometimes that in just about every scene occasionally a gig is like a rerun: the same players, the same audience, the same everything. Nothing wrong with a gathering to celebrate the talents of friends, but who on the outside ever enjoys an inside joke? What I'd like to see with Bruxism are new connections, new collabs, surprisingly successful mixtures of performers that may not make obvious sense on paper, and attending newcomers who might then become regular supporters of the greater avant, experimental, electronic, improvisational and general weirdo scene of this city. To me, Bruxism's success will be gauged on its ability to be fresh.