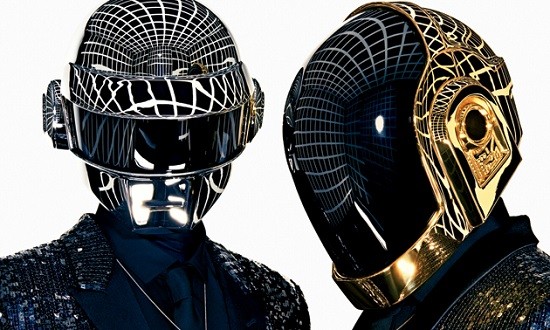 Here at RFT Music, we care about our readers. We want to bring you sunshine, not rain. Joy, not pain. That's why we sucked it up and watched the ridiculous 56th annual Grammy awards last night -- so you didn't have to.

No need to thank us -- we were happy to sit through four hours of hell to earn your love. We endured everything from Katy Perry's battle with the Harry Potter dementors to Robin Thicke corrupting Chicago (the band, not the city, though we imagine that happens too) to Daft Punk winning everything but refusing to say thank you. The entire Grammys telecast wasn't completely terrible, though. We also got to witness a performance from the two surviving Beatles and Kendrick Lamar making Imagine Dragons sound infinitely better than they really are.

Below, check out Grammy highlights and tweets about a few performers (we're hesitant to call them all "musicians") who have visited St. Louis or will be gracing our venues soon. And if you really, really feel like punishing yourself, you can consume a gazillion tweets and photos in our Storify collection about the Grammys. Get ready to say "Ugh" a bunch, though.

Beyonce and Jay-Z Open the Grammys with Sexytime

The Bey+Jay duet might have been the worst-kept secret in Grammy history (other than the inevitable Paul McCartney/Ringo Starr deal [See below]), but that didn't keep us from getting all hot and bothered while the lovebirds were groping each other during "Drunk in Love."

Queen B @Beyonce opens the show debuting "Drunk In Love" with husband Jay Z!! RT if you are excited! #GRAMMYs

Watch that epic opening Beyonce performance again and again until the end of time: http://t.co/QquZZFmpJm pic.twitter.com/IlGByipwMd

Made the kids leave the room during that Beyonce and Jay-Z reenactment of the making of baby Blue.

Beyonce singing to the chair reminded me of Clint Eastwood at the GOP convention. #GRAMMYs

The cutest Beatle and the most-overlooked Beatle hadn't performed together in years, but that changed in last night's TOTALLY SURPRISE triumph. Viewers tweeted their fear that the surviving British Invasion would employ holograms of George Harrison and John Lennon during McCartney's "Queenie Eye," but the Grammys wisely stuck to a Fab Two. Ringo may have been fake drumming, though.

We can be pretty fucking jaded, but seeing half The Beatles perform together was pretty damn cool. #grammys

Continue for more good stuff and some weird shit.

Imagine Dragons has the potential for greatness, but their boring, overplayed "Demons" song is sucking the life out of their momentum. Good thing, then, that newly crowned hip-hop royalty Kendrick Lamar gave the band a boost by sharing the stage for their hit "Radioactive." Lamar injected some oomph when the telecast sorely needed it, and it was arguably the performance of the night.

When show producer Ken Ehrlich spoke with Kendrick about his performance, the rapper requested to be paired with a rock band #GRAMMYs

OK Kendrick took a shit situation and made it work for him. He smashed the hell out of this! Well done, young man.

Taylor Swift Has Sex with a Piano

We're not even going to justify that subhead. You'll just have to view the tweets below and realize that T-Swizzle has found a sexy new way to get over lost loves.

#Swifties! You asked for it, @taylorswift13 is performing "All Too Well"! #GRAMMYs

T-Dog is reenacting the "When Harry Met Sally" orgasm scene with her piano. #grammys

Continue for more crazytown, plus star billing by a hat.

Pink is a phenomenal performer; there just aren't many vocalists who can belt out songs while twirling on a trapeze night after night. But damn, why did Nate Reuss have to ruin "Just Give Me a Reason" with his bizarre mustache? His follicular enthusiasm (not to mention his slightly off-pitch tone) detracted from what could have been one of the night's memorable performances.

Next up: Pink performs on a flaming banner of silk, walks the trapeze and performs MMA on a polar bear, and Nate Ruess will just stand there

Lorde is only seventeen, but you wouldn't know it from her performance outfit of Mom's pleated black pants and a sleeveless white shell. Her award-accepting getup, which channeled Wednesday Addams, wasn't much better. The girl does have, um, interesting dance moves, though.

There's Lorde, reppin' for awkward dancers everywhere. About time we had someone! #grammys

Wondering if the people who made the upcoming Lorde show at the Peabody an instant sellout are having a little buyer's remorse? #GRAMMYs

STAR OF THE NIGHT

Daft Punk won a lot of crap last night -- album of the year, record of the year, stormtroopers of the year, etc. -- but because the duo is made up of weird French robot folks with giant helmets, they didn't actually thank anyone for their good fortune. Instead, producer, rapper and collaborator Pharrell Williams had to do it for them. But it wasn't just Williams who was making statements -- Pharrell's hat got into the game, too! Wearing multiple chapeaux that viewers claimed as Dudley Do-Right's or Smokey the Bear's, Williams forced the Twitterverse to create @pharrellhat.

no RT @Arbys: Hey @Pharrell, can we have our hat back? #GRAMMYs

Thanks @Pharrell for a memorable #GRAMMYs night. Only you can prevent wildfires. http://t.co/o0OQ2rH4FQ @smokey_hat pic.twitter.com/HWTqbnuEU6

What did you love or hate about the Grammys? Who was borked out of an award? Tell us in the comments, and find winners and recaps at grammy.com.