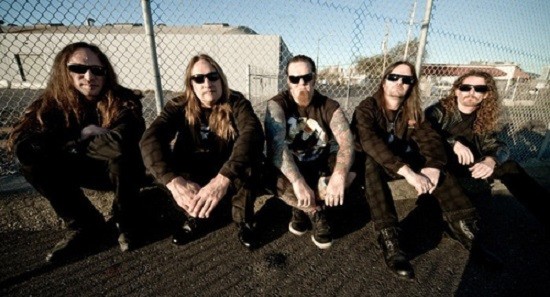 Prepare yourself, St. Louis metalheads, one hell of a tour is coming to St. Louis this spring. On May 15, Suicidal Tendencies and Exodus will hit the Pageant with what remains of Slayer (proposed name change: "Kerry King and the Slayers"), ensuring that St. Louis necks will be snapped and bangovers will be acquired.

Slayer, of course, suffered the loss of guitarist Jeff Hanneman in May of last year, who died suddenly of liver failure. Exodus guitarist Gary Holt was tapped as a replacement. The band had already fired on-again-off-again drummer Dave Lombardo a couple months prior, bringing in sometimes-alternate Paul Bostaph once again to fill his place. Slayer purists have been quick to call foul, claiming that Lombardo and Hanneman were the group's most talented members, but apparently the show must go on.

Exodus, often thought of as the next runner-up to thrash metal's "big four," will be along for the ride as well, meaning Holt will be playing double-duty that night. The last time Exodus came through was in the days of the Creepy Crawl (unless we missed something), and the place was hardly packed at that time, making this quite a step up.

Perhaps most exciting is Suicidal Tendencies, led by Mike "Cyco Miko" Muir, well-known for his love of Pepsi-Cola and his parents' apparent unwillingness to provide it for him. ST has had a rotating cast for years decades -- Muir is the only permanent member, in fact. Unlike with Slayer, fans hardly hold it against the group (though the 2012 departure of longtime guitarist Mike Clark had to be a hell of a blow).

The show has yet to be announced by the venue, but Lambgoat.com has already spilled the beans and is usually on point. We will update this post with ticket info as soon as it is officially announced.

In the meantime, watch the videos below and get your headbanging muscles in shape; you are going to need them.