The Ten Best Shows in St. Louis This Weekend: January 17 to 19 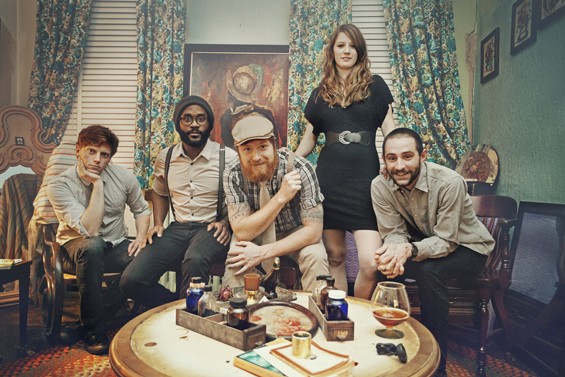 This weekend features the debut of a few St. Louis albums from Sleepy Kitty, Magnolia Summer and Amen Lucy, Amen. Support local music, and then check out a variety of acts from out of town including Nipsey Hussle, Scowler and Random Rab. Get some info on these shows and more after the jump.

Scowler w/ Life in Vacuum, Laika @ Lemp Arts Center 8 p.m. / $5 This post-hardcore powerhouse of a bill features Scowler from Milwaukee and Life in Vacuum from Ontario. Click the links to hear tracks from the bands, and check out a profile from last summer with local openers Laika. (MS)

This or the Apocalypse w/ Sworn In, Shai Hulud, Sirens & Sailors @ Fubar 6:30 p.m. | $13-$15 Stick around after this show for Ramming Speed on the lounge side, featuring ex-members of Bones Brigade. It is free to attendees of this one! (DH)

Also on Friday, check out the Sleepy Kitty Record Release and the Bottoms Up Blues Gang. Click the links to read more.

Nipsey Hussle w/ Erk Tha Jerk, Tef Poe, MARKOE, Step Or Get Left, Allen Gates @ Pop's Nightclub 7 pm. / $20-$27 Nipsey Hussle is all LA, his latest mixtape dedicated to the boulevard where he grew up, Crenshaw. He's a voice of the people of South LA, with influences including N.W.A., Ice Cube, Snoop Dogg and Dr. Dre -- you know Nipsey is definitely delivering some of that sweet, classic West coast rap. (Tara Mahadevan)

Civil Twilight w/ Logos @ Old Rock House 8 p.m. | $12 This quartet hails from South Africa and is often compared to the Police. You may recognize this song from one of the many TV shows it was featured on, including its use as intro music for Dwayne "the Rock" Johnson. Smell that? (DH)

Rash w/ Burn/Ward, Maximum Effort, Violations @ Blank Space 9 p.m. | $6 Hear some hardcore here: Rash (from Chicago) and Burn/Ward (from Richmond). Locals Violations and Maximum Effort open -- catch the latter while you can, as they don't get to play out often. (MS)

Without MF Order w/ Dirty Soap, Filfthy Jill & the Muscles, Mad World, Mother Meat, A Death and a Promise @ Just Bill's 7 p.m. | $5 Come for the spectacle that is Without Motherfucking Order (wherein the band's ex-pro-wrestling frontman harms himself for your amusement), stay for the rare opportunity to catch the pummeling hardcore of A Death and A Promise. All at Just Bill's, in beautiful downtown Overland! (DH)

Random Rab w/ Andreilien, Spankalicious, Pleasure v Filibusta @ 2720 Cherokee 8 p.m. | $18/$20 Random Rab is one of those rare DJs who is also a multi-instrumentalist, having toured with the likes of Bassnectar, Shpongle and Beats Antique. (DH)

For more options on Saturday, consider checking out the Magnolia Summer album release at Off Broadway, Charlie Wilson at the Fox or Wussy at Plush. Man Man also performs at Off Broadway on Sunday.