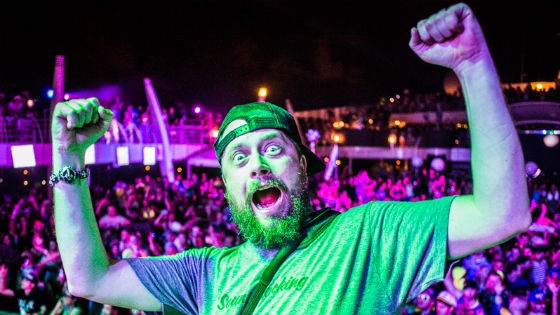 After three years of raging at sea, Hard Events' Holy Ship!!! cruise has proven itself to be the best nautical EDM adventure that money can buy. (Of course, we enjoyed press accommodations, so we didn't actually pay.)

It might still be a newish phenomenon, but this party boat has the most loyal fans, the edgiest lineups, and the biggest surprise guests. So from the moment that we made it through customs, our Holy Ship!!! 2014 experience was awwweeeesome.

Unfortunately, the MSC Divina's capacity is about 4,000 passengers. And while that's a lot of shippers, there are tons of fans who get left ashore. So just for you, stranded ravers, we're counting down the ten most epic moments.

Setting Sail Shippers have been waiting a whole year, ticking off the days, preparing their minds and bodies for this very moment. In the past, it took Holy Ship cruisers a few days to mix, mingle and make buddies. But this third year, the friendships were instantaneous. We wasted no time in catching up with old pals, dressing up in absurd costumes, hitting the dance floor and letting it all hang out. Even Hard Events' captain, Gary Richards, noted 2014's superior vibe: "Of the twenty years I've been doing events, I've never seen people go that crazy. They were fucking having it."

Gina Turner Plays Pregnant at 5 a.m. and Still Manages to Teach Yoga Before Noon At approximately 26 weeks pregnant, Gina Turner shouldn't have been able to stay up all night to play a back-to-back set on a giant cruise ship. It's even more impressive that the DJ-producer (who also happens to be Laidback Luke's spouse) woke up the next morning, boarded a boat to a private island and led a pre-noon yoga session. But turns out, that's exactly the kind of boss-level thug stuff that Turner pulls off on the regular.

Special Guest: Tiësto!!! Rumors would've had you believe the cruise's much-hyped "???" set would be Dog Blood or maybe Jack U. Even Daft Punk seemed more believable than techno's king Dutchman. In fact, when someone on the boat tried to tip us off, we laughed in their face. But then Zedd finished his set and took the mic, introducing his "great friend." And for a moment, Richards and company messed with the Shippers, pushing notorious EDM troll Dillon Francis onto the stage. But Tiësto soon pushed him out of the way and delivered a deep-house set for the ages. All the other DJs joined in for an all-star conga line, the likes of which will never be seen again. You should have been there.

Continue to the next page for more Holy Ship highlights.

Chromeo's P-Thug Busts Out the Talk Box We've followed dance music obsessively for years. Yet over the course of almost a decade of dedicated partying, we have never managed to see Chromeo live. That's why we were disappointed by the sight of "DJ set" beside Chromeo's name on Holy Ship!!! lineup. But all frowns were turned upside down when P-Thug busted out the talk box during Saturday's set on the pool deck. He let loose with a few freestyles and crooned some classic hooks. And for that almost-live funk, we must give thanks.

Claude VonStroke's Back-to-Back Surprise Set Featuring Almost Everyone The best parts of Holy Ship are the surprise back-to-back DJ sets. But there's has never been anything quite so epic as Claude VonStroke's all-star takeover of the MSC Poesia's Discoteque on Saturday night. The Dirtybird head honcho was joined on the decks by everyone from Diplo to Disclosure, Skream and Tiësto. As Hard's Gary Richards recounted, smiling ear to ear: "Claude told me there were so many people back-to-back, he only played one record. That's so rad. I hope that happens to me one day."

Private Island, Part II The first night of Holy Ship!!! private-island partying set the mood. But the second night was the absolute pinnacle of feel-good greatness. It was a straight everybody-surfin' vibe as the crowd danced and splashed. Free food was provided for all to enjoy. The crew busted out the biggest beach ball ever. One carefree girl danced atop a blow-up couch and didn't mind when she fell on her face. The Holy Ship!!! staff never even got annoyed when revelers stayed on the beach for two hours after the party's scheduled end. Sunburns be damned, that shit was well worth it.

Pharrell's Helicopter Fly-In It was 3 p.m. on Saturday, the Shippers were frolicking in the ocean, the sky was big and blue, but Pharrell's helicopter was nowhere to be seen. Backstage, Gary Richards was almost having a hard attack. He said Pharrell was going to play the beach. And goddamn it, even if they had to push the schedule back an hour, Pharrell was going to play the beach. So Skrillex held down the decks with an extended two-hour set, and just in time, Pharrell was spotted making his landing. The superstar dropped a medley of crowd favorites, including "Feds Watching" and "Let's Get Blown," before ending things with "Lose Yourself to Dance." He'd reprise some of those for his main-deck show, but Pharrell sing-alongs on the beach are definitely better.

Continue to the next page for more Holy Ship highlights.

Flume The Australian EDM scene repped aboard Holy Ship!!! 2014 with plenty of up-and-coming stars, but one of the clear favorites was Skrillex's latest collaborator, Flume. He didn't wimp out and just do a "DJ Set." He brought his whole set up for a full live performance. The Sydney native's first set in the lounge had the boat abuzz, and his performance on the main deck (though it didn't draw the largest crowd) was surely one of the cruise's most impressive. Massive props to the Aussie beatmaker for bringing it hard. We can't wait for a chance to catch him again. This is definitely his year.

Tiësto Shutting Down the Discoteque So we already gave it up for Mr. Tijs Michiel Verwest, but we're going to have to do it again. The Dutch master reprised his role as special guest for a dark and sexy set at the Discoteque, and the vibes were so massive that he shut down the whole floor. Hundreds of sweaty bodies piled into the intimate space, forcing guards to stand at the entrances and the elevator, pushing back hordes of music fans who were desperate to sneak in and get down. The next scheduled act, Oliver, almost didn't make it through the Discoteque crowd in time to take over DJ-ing duties. We've never seen such a frenzied rush on one stage. Ever.

Meeting Your Favorite DJs Without a doubt, the most epic thing about being aboard Holy Ship is the opportunity to score an impromptu meet-and-greet with your favorite artists. We saw one fan get his Disclosure vinyl signed. We personally shared a lil' moment with Skrillex, catching Shlohmo rocking it out on the pool deck. Our buddy got to give Zedd a high five. And throughout the cruise, Hard's Gary "Destructo" Richards was approached by tons of fans who stopped by to sing his praises.

For a true EDMer, Holy Ship is an unparalleled paradise. Even in the customs line on the way home, there is ample opportunity to get that photo with your fave DJ. We're all on this boat together. Who will you meet next year?