Win Tickets to See Memories of Elvis Saturday at the Pageant 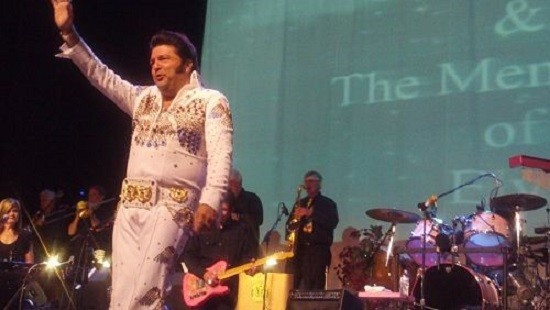 Elvis impersonator Steve Davis' annual concert at the Pageant is this Saturday, and RFT Music has two tickets to give away!

See Also: Memories of Elvis By the Numbers: Pelvic Thrust Count and Other Highlights

To win, simply name your favorite Elvis song and tell us why. Be creative! You may enter in the comments below -- make sure you include some way of contacting you, as well as your full name so you can pick up your tickets. We will announce the winner here by 5 p.m. Friday.

Last year we sent RFT Music writer Allison Babka to the show. Here are her thoughts, from the review:

Elvis impersonator Steve Davis has kept "The King" alive for more than twenty years through his "Memories of Elvis" extravaganza, which returned Saturday night to the Pageant. Flamboyant jumpsuits! Patriotic backdrops! Buddy Holly and Patsy Cline (creating a "dead people-palooza," as the evening's emcee suggested)! Davis' show prides itself on accurately depicting the details of Presley's live performances, right down to the tears on his screaming fans' faces.

Watch a video of Davis performing with his Mid-South Revival Band in 2010 below: