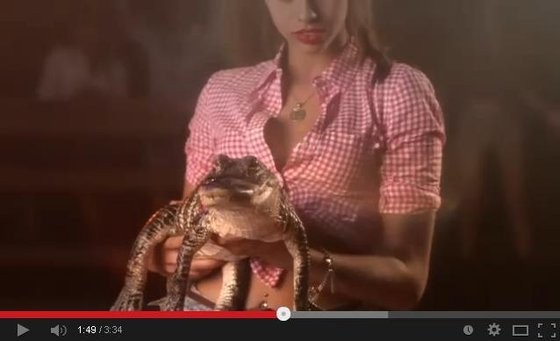 Perhaps I was being too dismissive, given that the video has more than 50,000,000 views, though I have to assume many were watched sarcastically and with hatred in the watcher's heart. Nonetheless, I decided to watch it, hoping that it would change how I felt about the song, or at least make it less likely that when it came on the radio I'd drive my car off a cliff.

Alas, that did not happen: 0:01: The video editor going straight from a shot of Ke$ha to a shot of a donkey seems like a not that subtle #ShotsFired. Applause. That took some grapes. We are off to a tremendous start.

0:02: I guess she's in her Carrie Bradshaw phase? Also, I do not think Ke$ha looks all that much like a donkey, though I will not argue too heartily against someone who does.

0:10: The first words of the song: "It's going down. I'm yelling 'Timber!'" I would like to take this moment to point out that NINE SEPARATE PEOPLE received songwriting credit here. NINE. That's basically the fucking Wu-Tang Clan, man.

0:18: BTW: You should know that this video is not new. It was posted to YouTube on November 25. I did not watch it then because Thanksgiving was soon after, and that is not what the pilgrims who founded America and invented football and Twitter would have wanted.

0:37: Here comes Pitbull. If you're wondering how far into his verse he'll get before he raps some sort of cliché...

0:50: "I'm slicker than an oil spill." One more time: NINE PEOPLE SHARE SONGWRITING CREDIT. You know what my favorite thing is about oil spills? All of the dead marine life and crippled ecosystems. So much fun.

1:40: Did you know that this is the most successful song Pitbull's had since he did "Give Me Everything" in 2011? That song was this same sort of brainless house-hop that people like to listen to when they don't really want to listen to music.

1:49: I was actually just about to say that what this video needs is a woman dressed like Daisy Duke holding an alligator (above), so this is good timing.

Continue to page two for more. 2:00: Do this: Pause the video right at the 2:00 mark. I'm not the only one who's a little disappointed with Pitbull's lack of muscle tone, right? I mean, a guy waits years to see Pitbull with his shirt off and this is the reward. You know what nvm bye.

2:19: I'm pretty sure those are nurse sharks that Pitbull is fussing with. My sons are super into sharks right now, which is why I know that nurse sharks are basically the pussiest of all sharks (not counting the whale shark, of course, which is barely even a shark). That said, I'm still not too interested in getting very close to anything that swims and has teeth. (This is also why I've never gotten into the water with Rihanna.) (Rihanna was not expecting to take such a beating in this column, I'm sure.)

2:22: How long do you think Ke$ha could actually last on a mechanical bull? Ewww, do you remember that joke about how witches hold onto brooms? Gross, gross. Sry. :/

2:42: Oh fuck. Pitbull is in the water, and that's perilous enough since there are probably sharks around, but more impressive is that he's swimming with his eyes open. That shit is the worst. I tried that while swimming in the Gulf of Mexico once. It was like trying to look through battery acid*. Pitbull is a boss.

*The Gulf of Mexico ain't exactly the cleanest body of water. I swear to God one time I watched a stingray swim up onto the shore, stand up on its end, wipe itself clean of the mucky water, then mutter "Come the fuck on already with this water." I swear to God.

3:08: I'll say this. Pitbull always looks like he is enjoying himself.

3:24: True: I actually met Pitbull once. He was appearing at this backbeat club in Houston to celebrate a thing that was being celebrated by a record label he had ties with. The PR person tried to make it a very formal affair. There was a red carpet setup and everything, only except it was done right in the middle of the parking lot outside the club. I was one of the only journalists, so when one of the artists would arrive, the PR person would say, "Shea, do you want to interview this guy?" and I would either say yes and she would introduce me or I would say no and she would make a frump face.

The two people I said yes to: Baby Bash, a semi-famous regional artist that had a guest verse on South Park Mexican's wonderful Never Change album that I wanted to ask Bash about, and Pitbull. Pitbull was very polite and very short and very well dressed (even back before he was truly famous he only ever wore suits) and smelled like how I imagine very successful people smell (they also mention that in the interview above). I can say no bad things about him as a person. That said: This song is the pits. No change there.

Oh, super important sidenote: Former NBA player Robert Horry was there too. I was very excited about that because this wasn't too long after he hit a mega-three pointer in Game 5 of the NBA Finals that helped the Spurs, my favorite everything, win the NBA Championship. I had 6,000 things I wanted to say him. I was so truly amped up. And I said exactly zero words to him. Instead, I just made eye contact with him, felt my stomach fall out of my butthole, then made this strange gargle noise at him. He looked at me, looked off to the side, looked back at me, then walked into the club. It was my favorite moment of the night.