Is This the Michael Bolton Renaissance We've All Been Waiting For? 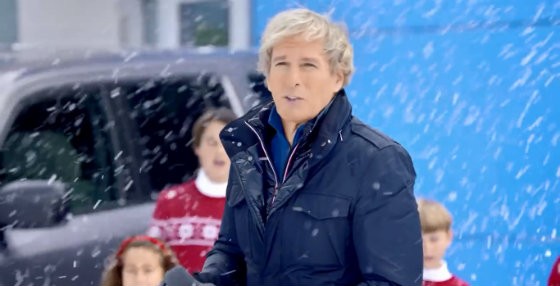 Soft-rock seems to be making a comeback. Just recently Phil Collins announced his glorious return to music, and now Michael Bolton has been plastered all over our TV screens. That's right, Michael Bolton. That balding dude your mom used to listen to.

It's tough defending Bolton, but hey, I'm up to the task. It looks like Bolton is back in a big way, and though he seems to be rocking hair plugs or a wig or some such ridiculousness, I'm glad of it. This is the Michael Bolton renaissance we've all been waiting for, and I personally welcome our new adult-contemporary commercial-jingle overlord.

It started with the holiday commercials. Recently it seemed you couldn't turn on the TV without seeing a car commercial featuring Bolton singing some holiday classics. I was a little bit confused by this. I mean, first off, why would Michael Bolton be in a commercial in 2013 anyway? The dude's career started to falter sometime in the mid-'90s.

So why was Michael Bolton trying to sell me a Honda Civic?

Oddly enough, it's because the people who write commercials think Michael Bolton is cool enough to sell me a sedan. Though that statement sounds bizarre as hell, it clearly worked. The ads were everywhere, and I couldn't get Michael Bolton out of my head. He even started showing up in my Facebook feed!

But if you thought the Bolton renaissance was going to end when Christmas was over, think again, readers. Bolton is now shilling Starburst, enriching them with flavor through the power of his voice. Yeah, Starburst ads are weird.

I like this, though. Maybe it's the comfortable familiarity of a soft-rock icon selling me mid-size cars and candy, but I'm happy to see Bolton out there doing his thing in the ads. I'm guessing he'll probably show up in a Super Bowl commercial before long, and why not? Let the man have his late-career revival however he can swing it.

The fact is, Bolton's taken so much abuse over the years. He's even infiltrated other bands and ruined their reputations; be glad if you don't remember that power ballad he wrote with KISS back in the day, because I wish I could scrub it from my memory. But Bolton's not a bad guy, he just got saddled with a shitty rep.

Looked at from any perspective, he's got an amazing voice, he's a pretty generally decent person, and he makes your mom happy. Sure, he's recorded a lot of really lame music over the years, but let that die with the '90s.

Will I buy an album of his now? Hell no. But will I buy Starburst? Maybe, and that seems to be his only agenda these days. If this is truly his new career path, let's get him in as many commercials as we can. I will never get tired of hearing this man sing jingles on TV, even if I could do without ever hearing his cover of "(Sittin' On) the Dock of the Bay" again.