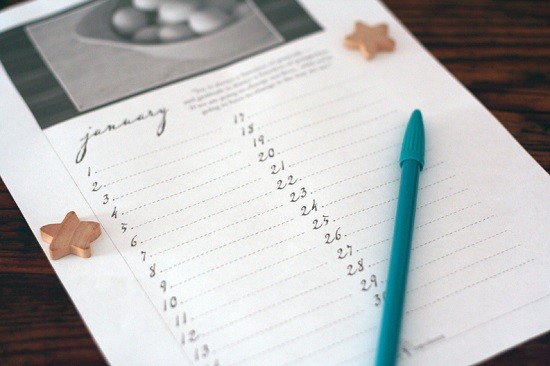 Will music journalism always suck? Probably. MTV will always feature at least three Justin Bieber articles on its news page, and NME will continue their 1:4 ratio of articles about members of Oasis. And of course, people like me will still write articles about botching interviews and how cool nu-metal is.

But with a new year brings new hope. As part of the constant effort to create a better site and become a better music journalist, I multiplied six by six to give you the ultimate sixlist: 36 New Year's Resolutions for an Awful Music Journalist.

3. Put my arms around Mark McGrath, just like he asked 4. Actually Imagine Dragons, because somehow it is less nerdy than listening to them 5. Create and manage a new music superstar named Doug Step 6. Create and manage a sexy pop superstar infant named "Baby Goo Goo" to tour with "Lady Gaga" 7. Finally pitch the show Danzig With the Stars 8. Replace the remaining members of the Misfits with three KISS Pez dispensers

9. Figure out if Geddy Lee from Rush is really Les Claypool from Primus' grandmother 10. Remind myself when I am renewing my license that at least the DMV does not stand for Dave Matthews Van 11. To incubate in Steven Tyler's chest and then burst out of it with a tinier version of me that comes out of my mouth 12. Continue not listening to ska, even though I am impressed by a band calling themselves the Ska-Skank Redemption

13. Take better care of my body now so that I can sell it to Vince Neil for more drugs later 14. Blow the lid off the Internet with a list of "Rappers Who Look Like Cats"

15. Get extremely overweight and then accidentally kill Chris Cornell during sex 16. Convince my father that it is pronounced "Bong Iver" 17. Turn Mumford and Sons into a hardware store 18. Stop shopping at co-ops if it means I don't have to watch a woman sing Blues Traveler to a baby 19. Rationalize my deteriorating good looks by remembering that the guy from Coldplay is going bald, too. 20. To never forget that the guy from Avenged Sevenfold is no longer going bald because he is rich enough 21. Actually listen to the Arctic Monkeys so I can find a reason to hate them aside from their name

22. Find a strip club where all the dancers are Rob Zombie and all the music is made by sad, beautiful women 23. Force-feed Carlos Santana breast-milk pizza 24. Meet a member of the band Autograph and ask him for his autograph while nudging him with my elbow over and over again

25. Remind people of the amazing Nickelback parody video seen above more often 26. Stop wishing every member of Def Leppard lost all of their arms whenever "Pour Some Sugar On Me" comes on 27. Stop thinking of people who walk into coffee shops holding acoustic guitars in the same way as a right-wing Christian thinks of an Arab man boarding an airplane 28. Convince more people that I believe The Perks of Being a Wallflower is a book about getting free socks and lunchmeat trays from being in the Wallflowers 29. Get facial tattoos to resemble Dave Navarro's facial hair

30. Petition companies to stop testing on animals and start testing on Dave Navarro 31. Become a bartender and mistake the term "hair of the dog" with "Temple of the Dog" over and over again 32. Petition Black Sabbath to redo an entire record with Gilbert Gottfried on vocals 33. Quit calling her Carly Rae Jetson just to piss off my friend's little sister 34. Figure out what the best Unblack Metal bands are 35. Carry a boombox that only plays Killed By Death by Motorhead 36. Write more lists, forever