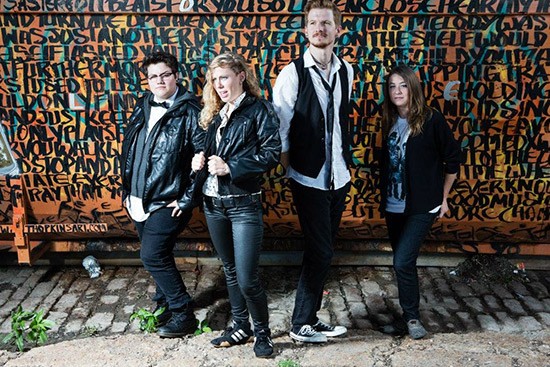 When asked how she would describe the Glass Cavalry's music, keyboard player and vocalist Katie Lindhorst says, "That's always the toughest question because there's so much going on. To put it simply, it's synth-pop indie-rock. A lot of the Middle Class Fashion's pop leaks in from my side. Grant used to do a lot of alt-rock and Shannon is very indie. A bit of each of combines in what we do."

Clad in black and with well-groomed coifs, the group gleefully stomps through its original song, "Black Disaster," in a new music video that debuts today on RFT Music, a veritable insurgency of synchronized rock guitars, foundational keyboards and drumming, and duel vocal harmonization.

The Glass Cavalry released its first EP in March 2011, and on the cusp of the new year, has a lot of exciting news to share. Before the ball drops on 2014, the band will drop a new single and welcomes a new fifth member, Cullen O'Donnell of LOGOS, on guitar and vocals.

Lindhorst recounts how the group originally formed in Columbia, Missouri in 2010 through a combination of what she describes as the notorious three ways that bands meet: a coffeehouse, a girlfriend and Craigslist. After moving back to most of its members' hometown of St. Louis, the band has played clubs all over town and shows no signs of slowing.

The group draws influence from its collective favorites, including everything from Metric and Third Eye Blind to the Wombats and the Naked and Famous. Songwriter Grant Barnum, an English major, tells personal stories with his words. Recent lyrics highlight the group's collective experiences moving back to St. Louis and that things that happened since they got there, says Lindhorst.

The Glass Cavalry will release a new single online on New Year's Eve, but fans can get a sneak peek download card by attending its show at Plush on December 28. Expect a new three-song EP out this spring. Listen to its full-length, Burn and Void, on the Glass Cavalry's Bandcamp page and check out the exclusive debut music video for track, "Black Disaster," below.

The Glass Cavalry filled in the blanks ahead of its post-Christmas show next week. See what they had to say on the next page. 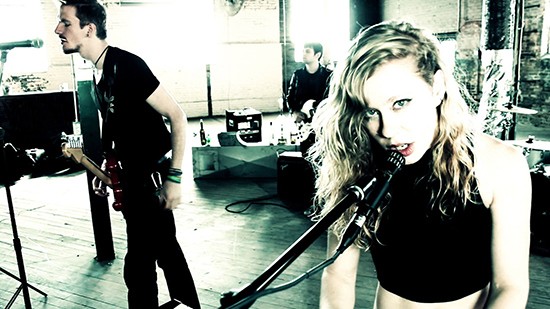 Katie Lindhorst (keyboards, vocals): What I like most about St. Louis is... the city lights at night. Everything sparkles on the river and reflects off of the Arch -- such a beautiful sight. I make music because... I am compelled to. I come from a long line of artists and musicians and was born with an unquenchable thirst for expression. That never played out well in the classroom, but when it came time to write, draw and sing, I never felt more alive and at home. I've learned the most from... the people around me. My family is a huge source of inspiration -- every one of them being a musician. The musicians in St. Louis all teach each other something. We are all about helping each other succeed. If it weren't for these talented teachers, I'd be spinning in circles. The St. Louis music scene could use... even more music! There are so many musicians under the radar. If we each spread the love every time we heard a great new demo, we could spread our reach even further! The best post-show food in St. Louis is... the City Diner on South Grand -- best ever. The Southsider is my favorite plate of food. Five current artists worth listening to are... Fitz and the Tantrums, Metric, Walk the Moon, local beasts Bruiser Queen, and Robert DeLong. The most difficult lesson I've learned while playing music is... no art is perfect. No matter how much you push and run yourself thin trying to perfect a project, there is an amount of ebb and flow that is natural in the creation process. You have to trust your instincts and bandmates to see you through uncertainties.

Shannon Durington (bass): What I like most about St. Louis is... the neighborhood vibe. For the most part, the people here are friendly and great conversationalists. I love meeting new people, especially in the music scene. You hear a lot of great stories. I make music because... I love it. I know it's a simple answer, but I love the thrill of being on stage and the creative outlet of writing music with my band. I've learned the most from... every band I meet, every song I hear, every show I see. The St. Louis music scene could use... more national recognition. The best post-show food in St. Louis is... City Diner, if you can stomach the fact that Katie will order a coffee and a tomato juice. Five current artists worth listening to are... Yeasayer, Robert DeLong, Local Natives, Kendrick Lamar, Sleepy Kitty. The most difficult lesson I've learned while playing music is... the words "sleep" and "disposable income" become strange and foreign concepts to you.

Lyndsey Rawley (drums): What I like most about St. Louis is... the vast amount of culture it has to experience. You can go to the Hill and eat some authentic Italian food or head to Powell Hall and experience the copious culture and talent of the St. Louis Symphony. I make music because... it's in my blood. My family is full of musicians and it wasn't very difficult for me to figure out that music is what I need to be doing with my life. I've learned the most from... experience! It didn't matter to me if I was going to fail miserably or not -- I just needed the experience of mistakes or success in order to learn from them. The St. Louis music scene could use... some more credit! There are tons of bands in the STL music scene that are amazing and people need to realize that and go to see their shows instead of just writing off the local music scene. The best post-show food in St. Louis is... hot dogs from the cart in the Grove. They are fantastic. Five current artists worth listening to are... Foxing, who are a St. Louis natives, Lovers, LCD Soundsystem, Best Coast, and Beach House. The most difficult lesson I've learned while playing music is... that it's okay to make mistakes and you should practice making them. If you get comfortable with your reaction when you drop a stick or miss a beat, then it won't be as apparent during a show.

Cullen O'Donnell (guitar, vocals): What I like most about St. Louis is... the music, the food, the people that live here and of course the St. Louis Blues. Go Blues! I make music because... it's easier than being a responsible adult. I've learned the most from... writing music with other people. Getting a different perspective on the music you're trying to make can be educational and inspiring. The St. Louis music scene could use... Good question. The music is here. The venues are here. Music lovers are here. Why doesn't it always all come together? Maybe more of a commitment by local media to make the audience aware of our awesome music scene? Kudos to RFT on being a publication that does so already! The best post-show food in St. Louis is... City Diner or a Steak and Shake drive-thru. If I'm going out for food after the show, that's where I usually end up. Five current artists worth listening to are... the Glass Cavalry, Middle Class Fashion and LOGOS. That's not five...um... The most difficult lesson I've learned while playing music is... the music business is more business than it is music.

Grant Barnum (guitar, vocals): What I like most about St. Louis is... that it doesn't take long to meet real artists making a genuine effort to improve the quality of music in the area. St. Louis isn't internationally known as a top producer of music, but the individuals here are really trying to change that. I make music because... I've felt for a long time that being a musician is what I'm born to do. I feel most at home on a stage, and music is what makes me feel the best about myself. I've learned the most from... Musicians can be introverted and closed-off sometimes, but for the most part we form a great community for learning. If you find the right people and are open to directions you might not have been comfortable with before, you can learn things about yourself from the perspectives you find in the artists around you. The St. Louis music scene could use... a little more exploration. I'd like to open up a local magazine or online blog and hear about bands I've not been to see yet doing their damndest to improve their sound and spread the word. I'd like to hear about bands and venues thinking outside the box to encourage our city to be more prolific and less afraid of new material. The best post-show food in St. Louis is... City Diner on South Grand. No question. Five current artists worth listening to are... LOGOS, Trombone Shorty, Umbrella Blvd, Robert Delonge, Enter The Haggis. The most difficult lesson I've learned while playing music is... if you really want to have an effect on people, you have to think from their perspective. Audiences don't connect to what the music means to the artist -- they connect to the way the artist makes them feel. That's the honest truth that I have to keep reminding myself of.