The Ten Best Shows in St. Louis This Weekend: December 6 to 8 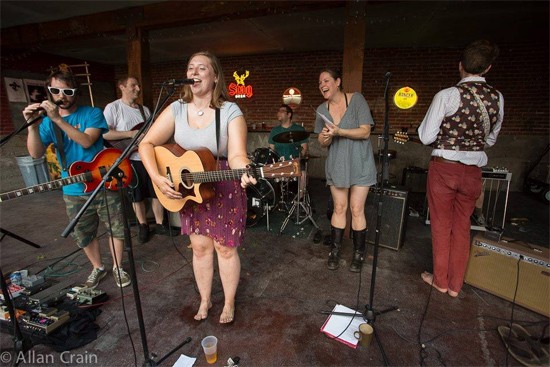 OK, so calling these posts the "ten" best shows in St. Louis each weekend is a bit of a stretch. Admittedly, we like to include as many shows as possible and inevitably end up linking back to all sorts of preview coverage from earlier in the week. Please excuse the following obsessive, excessive hyperlinks, but know that we do it for you. There's way too much going on and it always pains us to play favorites. Remember to suggest shows for our weekly show posts anytime by submitting them online, or simply leave a comment under the post so everyone knows what's going on. This week's recommendations await after the jump.

Between the Rivers: Farewell Show w/ The 45, River City Sound, I Have A Bomb, This Is Our Dance @ Pop's Nightclub 7 p.m. | $3-$7 I think it is funny that the final show of a band called "Between the Rivers," which I assume is referring to the Missouri and Mississippi waterways, is actually taking place at Pop's and therefore not between any rivers at all. That's some straight up Alanis Morissette- certified irony right there. In any case, the band is catchy as all hell and this is its final stand. Only $3, too! (DH)

Philipalooza 2013: A Concert to Fight Lou Gehrig's Disease w/ Street Fighting Band, Aaron Kamm & The One Drops, Funky Butt Brass Band, Speakeasy, Bockman, The Hatrick, Mom's Kitchen, Old Salt Union, The Scandaleros, Lightning Bottle Band, Snarky Gargoyles + many more @ Old Rock House 6 p.m. | $10-$18 This two-day event runs over into Saturday, December 7, featuring more than a dozen acts performing for a good cause -- a portion of the proceeds will benefit the St. Louis regional chapter of the ALS Association as will a silent auction and raffle. Check out the official listing for a rundown of who's playing when. (MS)

Also on Friday, check out the Pat Martino Trio for a second evening of performances, and go see the Defeated County as it celebrates one full year of being a band with a good cause: a special raffle for the evening and portion of CD sales benefit musicians without health insurance as well as Play it Forward STL, an organization that collects and fixes used instruments and donates them to underprivileged children.

Also on Saturday, the Bottle Rockets visit Off Broadway, Band Lotto takes over the Mad Magician, African Alert's 25th Anniversary hits 2720 Cherokee and the Quiet Concert series kicks off at Lemp Arts Center. Click on the links for extensive coverage on each of event.

Aaron Lee Tasjan w/ Joe Fletcher, La Guerra @ Off Broadway 7:30 p.m. | $10-$13 ALT's latest, The Thinking Man's Filth, opens up with a song called "Junk Food and Drugs." Intrigued, I continued listening (uh, not that I approve of either of those things officially. I am a serious professional, or something). By the time I got to the second song, "Everything That I Have is Broken," I was pretty sure I found a soul mate. Listen for yourself here. (DH)

Eat Drink Listen Finale w/ Trio TBD, Downstereo, Holy Sheboygan @ 2720 Cherokee 8 p.m. | $7 The "Eat. Drink. Listen." festival takes place all weekend, featuring collaborations between restaurants and bars with music and video artists. Grab a weekend pass to check out multiple events or head to the finale to see what it's all about. Check out the full schedule of events, featuring everything from brass music at Blank Space to jazz at 4 Hands Brewery, on the official festival website. (MS)

Expire w/ Take Offense, Bent Life, Cross Me, Out of Time @ The Demo 7:30 p.m. | $12 Bridge Nine hardcore! If you know what those words mean, you probably know what this band sounds like. If not, think big, pummeling breakdowns interspersed with fast punk beats and shouted vocals. Lead singer sounds like the guy from Left For Dead too, which is never a bad thing. (DH)

For another great option, consider catching Chance the Rapper at the Pageant.