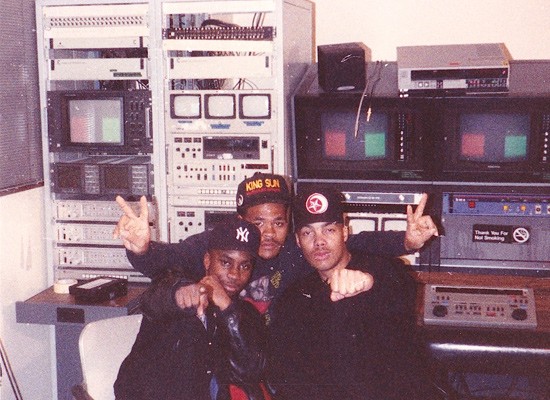 A quarter century ago, a show called African Alert invaded the airwaves at St. Louis' community radio station, KDHX (88.1 FM), exposing listeners to the golden era of hip-hop as it trickled throughout the country in steadily increasing streams. Ronald Butts, a.k.a. DJ G. Wiz, acted as a key player behind the mixing board, undoubtedly inspiring future generations of St. Louis DJs as well as hip-hop fans and historians. He throws a party to celebrate the show's 25th anniversary and the positively tinged music of its time at 2720 Cherokee (2720 Cherokee Street; 314-276-2700) this Saturday, December 7.

Inspired by his neighbor, Sylvester the Cat, G. Wiz got his start DJing for local roller rinks at the age of nineteen. Now, 35 years later, he continues to impart hip-hop knowledge and culture to this day as a documentary filmmaker and DJ on Old School 95.5 FM -- Friday nights from 10 p.m. to midnight. He also anchors an event called Turntable Orchestra at Vintage Vinyl, a live in-store collaboration with DJ Alejan, Nappy DJ Needles and Fly D-Ex. 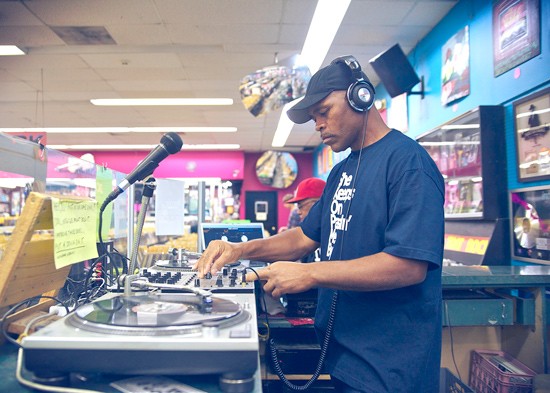 RFT Music: It's been 25 years since the show African Alert arrived on the airwaves on KDHX, bringing underground hip-hop to listeners in St. Louis. How did you get your start there, and how has has hip-hop evolved since then?

G. Wiz: Russ Giraud and John Anderson were doing the show, and they recruited me in 1988 as the DJ. They played music, but I was a mixer. Shortly after that, John Anderson stepped out and it was me and Russ. Russ stepped out in I think '92, '93 and that's when I changed the name of the show to Street Vibe. African Alert was the grandfather -- all those hip-hop shows on 88.1 all came from African Alert.

I really don't get into too much hip-hop today. I still love hip-hop, but I love the old-school hip-hop from 1999 and below. That's normally what I'm playing and what I'm DJing. That's what I love. As far as what's going on today, it doesn't have a feeling for me. It's not for me. It's a totally different generation, so I don't feel what they feel. It's what they do -- it's their thing. We had our period, our time, and I'm going to stick with that. 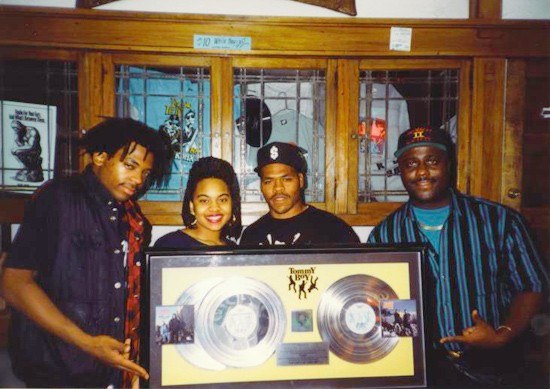 What were some of the earliest records you spun while DJing for African Alert, and what are you listening to right now?

Currently what sticks out to me? I pretty much wouldn't know if you told me -- that's just how far separated I am from today's music. If I hear something and I feel it, it doesn't matter if it was today's music or yesteryear's music. I don't like to put good music in a time slot. If it's Motown, it sounds good after 50, 60 years. Public Enemy's song "Fight the Power" still sounds just as good today.

I don't know the names of a lot of artists or songs today, but I do know that back in African Alert days, I could run some stuff off the music I was playing easily on that. That's what the show was based on -- that time when hip-hop was a bandage because everyone looked at hip-hop as something bad. The good thing about African Alert was that during that time span, you had Afrocentric hip-hop groups coming out: Public Enemy, X Clan, Jungle Brothers, A Tribe Called Quest, Boogie Down Productions. They were on that intelligent knowledge. There was a lot of that going on, and that's where African Alert fit in. 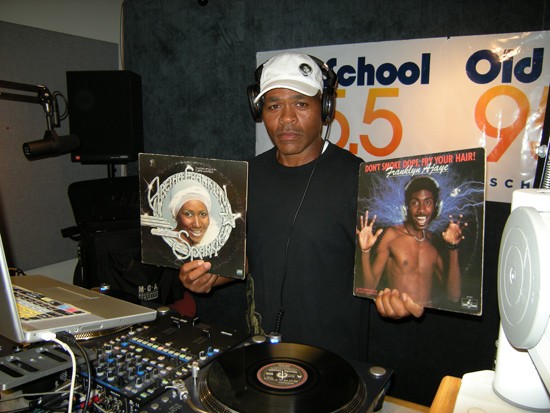 As far as going out and searching for things, I don't really dig for anything anymore. I'm at the point where I pretty much have when it comes to music just about all I can handle --- I'm satisfied. At one point, I sold my hip-hop stuff, sold the twelve-inches to the DJs here. St. Louis is not a historical-type place where they recognize people who are groundbreakers or people who left legacies, so basically when you become a certain age they kind of put you to the side.

I'm gonna go do my own thing in the meantime, but I'm going to get rid of some of this stuff I have that the younger generation can use. I didn't want to -- I had the space to keep them but I'm not going to be out there playing this stuff. They'll spin it. People need to hear this stuff. You know you have to pass the torches. You hold on to it too long and you'll burn your hand.

Who was along for the ride with you shedding some light on the golden age of hip-hop back then, and who would you say carries the torch today? 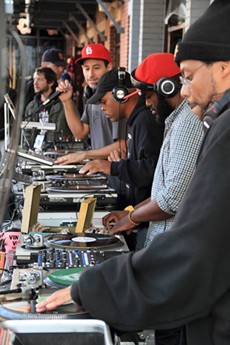 In the past, the RFT has written about your work as a filmographer, including your documentary projects The Rink, about the rollerskating lifestyle in St. Louis, and the Man with the Golden Horn about Oliver Sain. How have things progressed since, and what projects or events of yours can we look forward to in the near future?

I'm working on a new movie called Background Check: the Story of St. Louis hip-hop from 1979 to 1995. I hit a wall with The Man with the Golden Horn. It's not that I'm not going to finish it. I've got a lot of information just sitting, but I realized that it'd be easier to do a film dealing with the musical aspect that I have on St. Louis because I know the people, the people know me and I've got my own background history. One of the problems I'm having with that is that a lot of people do not have product on themselves as far as pictures, film footage or video footage. That's what makes a documentary.

The current project is moving at a pace where I need it to move faster. It's basically so many interviews and so much information. People have no idea how many artists were in St. Louis, and I can't get to all of them. There are 90 people I've interviewed for this movie, including DJs, break-dancers, MCs, record-store owners, promoters and fans of hip-hop -- a whole abundance of people. I'm trying to make it where It's like the world will know that St. Louis had a background foundation in hip-hop prior to 2000. You know, we were onto "Rapper's Delight" before most of the country was.

Why did you choose DJ Kut, Wise Intelligent, Lyfe Stile, Nato Caliph and 3 KNGZ to represent African Alert at your 25th anniversary celebration at 2720? What else can people look forward to at the celebration?

Originally, I was trying to get particular artists that represented that particular show and the music we was playing at that time. The original person I wanted to get was DJ Premier because Gang Starr was the first group that African Alert brought to St. Louis in 1990. Unfortunately, he was tied up. I know Wise Intelligent has been here before, and he puts out an excellent show. He responded immediately when I reached out.

As far as the local artists that I chose, Nato has always been outstanding when it comes to his prolific lyrical content. He's another one of those wise kids. I've known Lyfe Stile forever. He's like a little brother, and I know he knows the history of African Alert because he used to listen to it. He's still doing his thing, and he's on that level of positivity. He knows the show and was around that show during the time it was in existence. I think it's only right that he represents also. 3 KNGZ is a group that I recently ran across. I listened to a couple of their songs and saw a video of theirs. They're in the same realm of positivity.

Look forward to fun, reminiscing, real hip-hop and laughter. Also, I created the video mix back in 1996 and so I'm going to be DJing and doing the videos with the music. I'm playing 98 percent music from the '80s and '90s: Wu Tang, A Tribe Called Quest, Xzibit -- just straight, clean hip-hop as if I was on the radio live. It's one thing just hearing that music again but seeing the video from Yo! MTV Raps you used to look at brings back a whole different feeling inside you of "I remember when it was like this."