Out Every Night: The Best Shows in St. Louis From December 2 to 8

The Bottle Rockets, Goblin and Chance the Rapper all headline gigs to kick off December in style. Besides that, catch shows including Pat Martino Trio at Jazz at the Bistro and Midlake at the Old Rock House. Read on for a selection of shows in St. Louis this week.

Soulard Blues Band Monday, December 2, 9 p.m. @ Broadway Oyster Bar - $6 By RFT Staff The Soulard Blues Band has gigged around town for more than twenty-five years. Most notably, its weekly residency at Broadway Oyster Bar perfectly accompanies the Southern-themed vibe complete with booze and Cajun food. Bassist and sole remaining founder Art Dwyer, a blues aficionado on local community radio station KDHX, holds down the band with his casual plucked lines. The rest of the rhythm section follows suit, allowing room for solos to float between rounds of drinks and a comfortable swing.

Goblin Tuesday, December 3, 8 p.m. @ 2720 Cherokee - $25-$65 By Kenny Snarzyk From "Goblin Attack: Italian Prog-Rock kings of the horror movie soundtrack Goblin finally hit the USA": A progressive-rock outfit best known for its synthesizer-heavy soundtracks to horror movies Dawn of the Dead, Profondo rosso and Suspiria, the Italian group announced this summer that it would be doing its first-ever American tour, featuring founding members Maurizio Guarini and Massimo Morante.... Goblin produced soundtracks for a vast number of '70s and '80s Italian slashers, finding for itself a comfortable niche even as it endured constant, tumultuous lineup changes.

Midlake Wednesday, December 4, 8 p.m. @ Old Rock House - $13-$15 By Roy Kasten From this 2010 show review: The weather was Midlakian, if ever weather was. Mist and cloud vapors, a drizzle that came and went, all left the streets around the Old Rock House shining....The septet's hour and a half long set proved that esoteric, '70s British folk rock, played by a motley band of young jazz dudes, can be as bracing and thrilling as any sound in semi-popular music. Timeless is the word that comes to mind when immersing oneself in Midlake, but only if time begins in 1647 and ends in 1974.

Pat Martino Trio Thursday, December 5, 7:30 p.m. and 9:30 p.m. @ Jazz at the Bistro - $15-$33 By Ryan Wasoba From this 2010 preview: In one of the most inspirational and bizarre tales in music history, Pat Martino experienced severe amnesia after undergoing surgery for a brain aneurysm in the early '80s. With no recollection of his career, the jazz guitarist could have viewed his blank slate as an opportunity for a personal renaissance. Instead, he retaught himself his craft by transcribing and analyzing his own recordings. In the 30 years since, countless other musicians have educated themselves by the same method, delving into Martino's skewed harmonic phrasing like it's the Gospel of Pat. The respect is justified: Martino is one of few jazz guitarists to transcend the instrument's inherent clunkiness and rise to a level of fluidity usually known only to trumpet players and saxophonists, all the while staying comfortably inside -- and pushing -- the boundaries of hard bop.

The Defeated County Friday, December 6, 9 p.m. w/ Nikki and the Rooftop Punch, Jump Starts, Neonbraska @ The Heavy Anchor - $5 By Mabel Suen From "Fill in the Blank: The Defeated County": The Defeated County plays what Neubacher refers to as "creepy indie pop played on country instruments." She pours a primarily pop foundation with her strummed guitar and breathy vocals, leaving plenty of room for mandolin, pedal steel, drums and electric guitars to build up her songs. With influences such as Radiohead, Josh Ritter and PJ Harvey as well as muses including Kurt Vonnegut and the French Existentialist, Neubacher sings about relationships -- love and life relationships as well as the connection between personal and political worlds.

Mark Dew Friday, December 6, 8 p.m. @ The Hideaway - free By RFT Staff To walk into the Hideaway is to enter a place that seems frozen in time, where the dozen or so seats around the piano are packed with your grandparents' friends, decked out in chunky jewelry and tilted fedora hats. Ostensibly, they're here to listen to Mark Dew play — he's here Wednesday, Friday, Saturday and Sunday nights — but you're just as likely to hear one of those old-timers sitting around the piano trill Charlie Rich's "The Most Beautiful Girl." And when Dew finally has his turn at the mic, he'll say something humble, like, "I apologize; it should have been in the key of F." No matter. Dew is the conductor of this time-traveling train, and everyone's on board. Dew, who is blind, has been the piano man here for nearly a quarter-century and jokes that the best part about working here is, well, getting paid. He marvels at the younger set trickling in and its knowledge of the Cash and Sinatra songbooks: "The more the crowd gets into it, the more I play," Dew says. And that's enough to keep him around. "I'm not quite ready to be out to pasture," he says. "Yet."

The Bottle Rockets Saturday, December 7, 8:30 p.m. w/ Otis Gibbs @ Off Broadway - $15-$18 By Roy Kasten Some things the mind just can't comprehend: infinity, Schrödinger's cat, the fact that the Bottle Rockets' first two albums once went out of print. As essential to the Big Bang of alternative country as any records you could name, The Bottle Rockets and The Brooklyn Side have finally been restored with the sound and bonuses (a demo version of "Indianapolis" featuring Brian Henneman, Jay Farrar and Jeff Tweedy, anyone?) they deserve. When a band launches a career with songs like "Kerosene," "Welfare Music" and "Radar Gun" it has a lot to live up to. For over twenty years, the Bottle Rockets have done just that. The Bottle Rockets' classic material may have been reissued, but in concert you won't hear reprints. The band has too much fun bending its own rules while you sing along.

The Quiet Concert Series No. 1 Saturday, December 7, 8 p.m. w/ Nathan Cook, Greg Farough, Mark Sarich @ Lemp Arts Center - $5 By Joseph Hess Hot off the heels of last month's Noisefest, the brains behind the Lemp Neighborhood Arts Center have cooked up a fresh series of shows for the coming year. The new "Quiet Concerts" series expands on the growing trend of minimalism and space in noise music, taking heavy cues from the careers of American composers Morton Feldman and John Cage. The first edition features Mark Sarich, Nathan Cook and Greg Farough, who will challenge spatial sound in near-silence. Expect electro-acoustic explorations with subtle shifts in volume and tone. The venue's space provides an intimate setting with open seating. 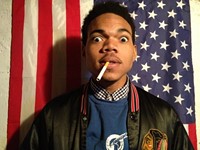 Chance the Rapper Sunday, December 8, 8 p.m. w/ DJ Rashad, Spinn @ The Pageant - $20-$24.50 By Tara Mahadevan Chicago's Chance the Rapper returns to St. Louis, this time not as an opener to Childish Gambino, but as the main act. With his strange cadence, Chance rose quickly through hip-hop's ranks after the 2011 debut of his first mixtape, 10 Day -- an ode to the lame nature of high school -- which he released after a ten-day suspension. Even if those days are far behind you, how could you not agree with him? High school blows and acid is awesome, and Chance is more than willing to tell you all about both. Like most hip-hop artists, Chance has done countless features with other emcees, such as Action Bronson, Twista, Childish Gambino, AB-Soul and Joey Bada$$, despite being fairly new to the scene.