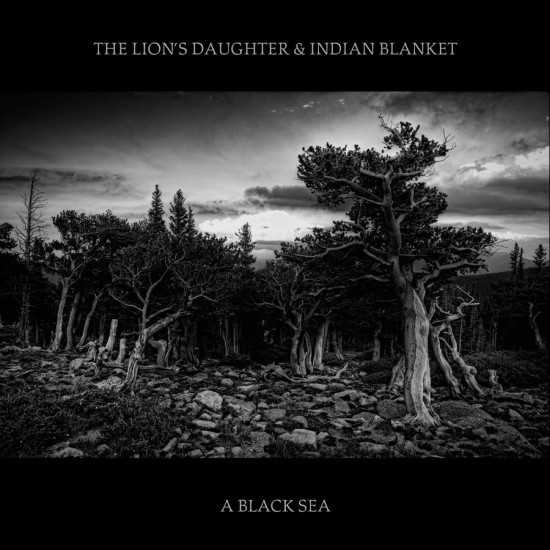 For the many blurred lines between St. Louis bands -- in which players dip in and out of each other's projects, or claim membership in a whole host of acts -- there is less true collaboration among bands than might be expected in our big/small town. So the meetup documented on A Black Sea is made all the more curious by the odd bedfellows that joined forces wholesale for this eight-song set.

The Lion's Daughter is a pummeling doom-metal trio helmed by guitarist and singer Rick Giordano (an RFT Music contributor on all things metal). Indian Blanket is a soft-touch folk quintet built around Joe Andert's intricate songwriting and careful, minor-key guitar strums. The common ground the bands share isn't exactly musical; it's emotional. Both bands mine the raw terrain of unflinching self-doubt, though they approach it with distinctly different decibel levels.

These singers could scarcely be more different, so it's not hard to tell Andert's sections from Giordano's. Andert sings with a sweet, beguiling melancholy that wraps around his band's orchestral-folk arrangements; Giordano growls like a hellbeast harvesting souls. When this marriage works, you can hear the emotional pull of Andert's songs get echoed by the visceral push of Lion's Daughter.

Opening track "Wolves" takes its time building to the punishing middle section, the fluttering string arrangements from Indian Blanket's Gina Eygenhuysen being matched by Giordano's electric guitar slashes. Often, though, the songs on A Black Sea feel less like a synergy of two distinct bands and more like a channel switch from one to the other. "Swann" begins with a creaking ambience, as bowed strings mimic haunted windchimes and eerie bells play a simple melody line. That mood is blasted away by Lion's Daughter's power trio double-kick-drumming its way through that melody. Indian Blanket returns for the coda only to be buried again.

It's better to say that Indian Blanket provides the nail to the Lion's Daughter's hammer. This relationship is most effective on the album's last song, "That Place." It's Andert and company's most entrancing arrangement, and they're given the bulk of the track to play the ballad amid guitar strums and mandolin plucks. When the metal kicks in, there's still room for a swooping violin solo and the final words of Andert's tale of drunken regret. On that track and others, the synthesis pushes each band outward. Is it doom-folk or orchestral-metal? Probably best not to overthink what to call it, exactly. A Black Sea is far from a seamless collaboration, but when the two bands lock in together, they produce a brutal beauty.