Chris Grabau and Danny Kathriner have dipped in and out of each other's musical lives for some time now; Grabau plays guitar in the Kathriner-led Half Knots, while Kathriner has recently begun drumming for Grabau's project Magnolia Summer. But with Cave States both songwriters share the stage equally, contributing songs and offering heartfelt acoustic-guitar strums and supportive harmony vocals for one another. This stripped-back setting gives a new frame to each man's talents and usual style.

Magnolia Summer has long embellished Americana songcraft with experimental tones and textures, and the last Half Knots record, this year's Proof, burbled with a kind of twangy soul. On The Great Divide the songs are taken back to their roots and intuitively ornamented by a gentle supporting cast that allow this album to bristle with themes of life's hard lessons and enduring rewards. 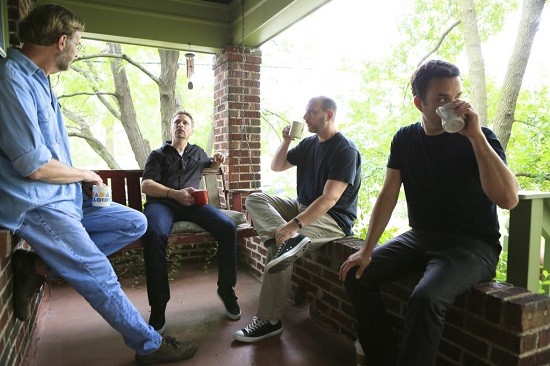 Most of the songs on The Great Divide rely on hushed understatement; both men excel at playing nuanced but forceful music written around the electric guitar (especially in Magnolia Summer), but the songs here are given room to breathe. As singers, Grabau and Kathriner share an ability to close in on the microphone one moment and pull back for a full-bodied holler (or falsetto) the next. The heavy, articulate strums on the title track act as a counterbalance to the whispered creak in Grabau's voice -- it's a study in contrasts that builds to one of the more satisfying crescendos, as piano and pedal steel gather around increasingly distant vocals.

For his part, Kathriner stays in front of the drum kit, his natural habitat as beatkeeper for the mighty country act Colonel Ford. The drums, when they do appear, are sparse and elemental. (It may be the ultimate act of understatement that John Horton, a regular collaborator with the co-leaders and a perennial nominee for this town's best guitarist, is present here as an occasional bassist.) But the ruminative nature of the songs jibes with the stripped-back instrumentation, leaving a collection that is simply but artfully framed.