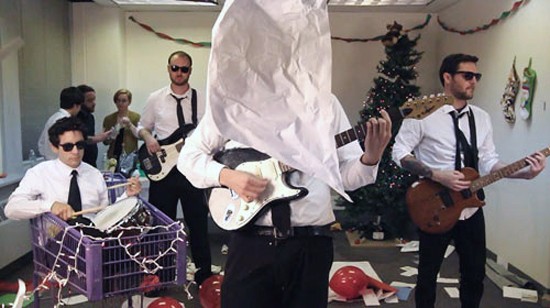 Popular Mechanics trails down the beaten path of rock while working in beloved, but all-too-familiar pop trappings. But each song the band deploys somehow comes packed with dynamic shifts, classy hooks and just enough of a rough edge to keep the whole experience from feeling sterile. Popular Mechanics finds common ground with '90s trends like grunge and early indie rock, but it never veers too far into one genre.

Popular Mechanics has two releases to date: Time and a Half, which came out in 2010, and Seven to Three, which came out on cassette tape in June 2013. Last week, the band uploaded a brand-new music video for the latest tape's title track. "Seven to Three" riffs on the life of an office drone, and the band physically works within a familiar setting. "The song talks about a white-collar existential crisis, so the office theme was pretty obvious," Todd says.

Dave Todd and Andy Brandemeyer met with us to discuss inspiration, and what it means to be a musician in St. Louis. Click though as the members of Popular Mechanics "Fill In The Blanks."

I make music because...

Dave Todd: Many of my close friendships have come about from playing music. For a dude who's not always terribly outgoing, it's really nice to have an alternative way to connect with people.

Andy: The musicians I write with and musicians I've listened to for many years.

Dave: How many bands/labels have been releasing good things around town. It seems like there used to be a handful of local releases a year that I'd be really interested in. Now, there's at least one local release a month that I want to check out (usually more). It's a real kick in the ass to get up and do something.

The most difficult lesson I've learned while playing music is...

Andy: Moving gear sucks more and more the older you get.

Dave: Rejection (whether it comes as ridicule or, more commonly, indifference) is an unavoidable aspect of putting yourself out there. So, it's very important to stay focused on why you do what you do, and why you find it important to do it. I suppose this is true in any aspect of life, but definitely in music where putting yourself out there is kind of the name of the game.

Some of my favorite local bands are...

Andy: Past/present: Ring Cicada, Riddle of Steel, the Conformists, the Humanoids, the Midwestern, Back of Dave

Dave: This is gonna be kind of long. As long as I've been paying attention to such things, it's always seemed to me like St. Louis has always been slightly disconnected from whatever cultural zeitgeist has been going on at the moment. Monoculture and all the modern gateways to virtual culture are of course present, but I honestly don't think that stuff has permeated St. Louis the same way it has other places. I think this sometimes bums people out, and there's some odd desire to "put St. louis on the map" by trying to turn it into the next Austin, Texas, or whatever. (I got no beef with Austin.) But there's always been a pretty genuine weirdness going on around here, and it seems like more people are really starting to appreciate it for what it is.

Tower Groove Records is just one of the things that pops out to me at the moment. They've got a real civic pride "STL for STL" type of thing going. I love that. You see it in more ways than just music. But, I probably relate to music more than other things.

See also: Tower Groove Records is worth its weight in vinyl

The St. Louis music scene could use...

Andy: Venues like the Hi-Pointe, Rocket Bar, old Creepy and the Galaxy to have never gone away.

Dave: More age mixing in bands. I'm sure it's just natural to hang out and start bands with people your own age (we here in Pop Mech are all around the same age). But I just think it's super cool when you see a "veteran of the scene" or whatever dig up some young punks and do something new (or vice-versa). And, while I really have no complaints about the music scene right now, it would be nice if there were like five more Jason Huttos.

The best post-show food in St. Louis is...

Andy: At home or a slinger from the Buttery.

Dave: Something you should ask our drummer Tim. He is one of the world's foremost experts on the St. Louis slinger. Seriously, Tim and his partner in gluttony Tony do NOT fuck around when it comes to slingers. Please check out his extensive blog of slinger reviews. These guys are doing the dirty work so you don't have to. http://stlslinger.blogspot.com/