One Direction's "Story Of My Life": Why This Song Sucks 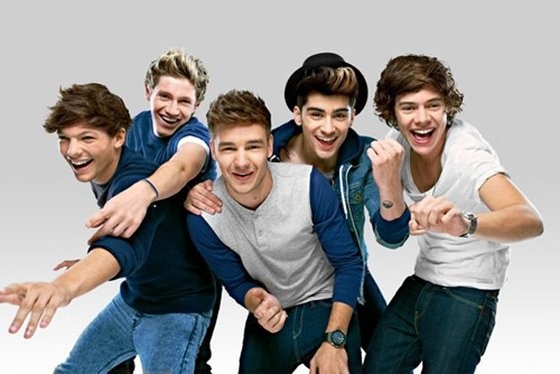 Song: One Direction's "Story Of My Life"

History: A long time ago there were barber shop quartets and then after that the New Kids On The Block, and more recently five UK dudes were like, "We're One Direction" and they were a hit.

Atmospherics: Like the boys are suddenly really into Mumford & Sons. Or like they're starting their own nondenominational church.

1. That One Direction has officially entered the stage of their career where they begin to try to leap from Boy Band to Credible Rock Musicians. That's what's going on here. But let's ignore that.

2. That nobody in One Direction can really sing or dance, which should've been more of a problem so far considering THEY ARE A BOY BAND AND BOY BANDS USUALLY SING AND DANCE.

3. Zayn is uncomfortably handsome. Let's ignore that too.

That leaves us with only the bones of the track. Did you know that eight people wrote this song? EIGHT. The Declaration of Independence is the greatest document of all time. Do you know how many people it took to write it? One, bro: Patrick fucking Swayze. First he won that dance contest, then he fixed up the Double Deuce, then he possessed Whoopi Goldberg and made her make out with Demi Moore, and then he wrote the Declaration of Independence. That's a little thing called a history lesson, homie.

Lines from the song:

This was one letter away from being a truly great line. Replace the "s" in "bones" for "r" and malibooyah: You've got something special here.

I'm saying, if a girl tells me she doesn't feel the same way about me, that's whatever. But if she tells me HER BONER'S PUSHING HER TO THIS DECISION, well, bro, I mean, you just gotta do whatever you can to win that girl back.

1. Chill, bros. Nobody in your group is over 21. You know what I remember from when I was 21? Nofuckingthing, is what. I remember wearing a lot of Hollister shirts, but that's it. You're gonna do hella worse shit growing up. Trust. Even money that one of you guys is going to wake up in a hotel room with, like, three or four hookers in the next year or so. Just keep it moving.

2. They won't just put any 'ol thing on your tombstone. I once called up a tombstone place and asked if they would put "Help! Dig me up! I'm not dead!" on mine. Nope. No bueno. I then tried to go with, "Bet you didn't know you could die with a boner. *eye wink* *shoots finger gun*" on my tombstone as a replacement. Nope. Tombstone people are total drags.

"The story of my life, I give her hope. I spend her love until she's broke inside"

Bro, "spend her love until she's broke inside"? I mean, I guess I had no idea the One Direction boys were throwing the D around like that. I don't think I've even made a girl sweat during sex before. These fools are going around rupturing insides. Zayn is probably like, "You're about to go one direction, baby girl: straight to the hospital."

Are you talking about your rib cage? Because then yes, you definitely want your heart to stay there.

Easy breezy. It's a cloud, son, not a fucking cheetah. Clouds are usually just chillin'.

(I) Zayn: You're that dude. Gimme a call. Break me inside. (II) Mumford & Sons is probably the last group you should wanna copy. They're like a bunch of homeless dudes in suspenders. (III) I miss Patrick Swayze.