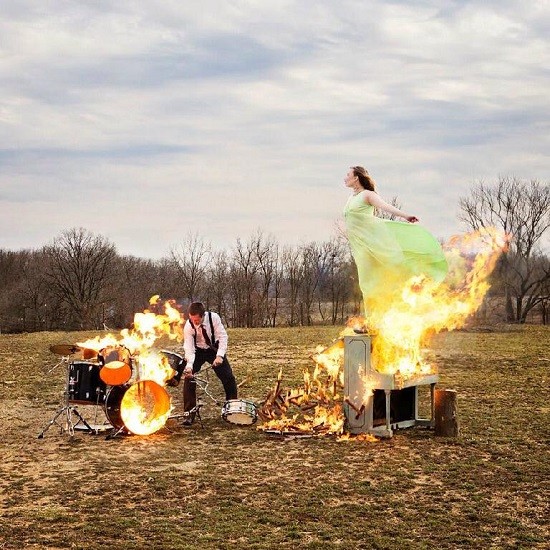 On the cover of her new album Ellen Cook stands astride the top of a burning upright piano as if it were the prow of a ship. It's a fitting image -- part phoenix and part firestarter, Cook shows great range on Bang Bang Bang within the seemingly limited palette of a piano trio. In this case, her trio is rounded out by Matthew Reyland, who plays drums with jazz cadences and rock velocity, and Abbie Hainz Steiling, whose violin amplifies the gypsy cabaret that was present in Cook's earliest performances.

For the first full-length as Ellen the Felon, Cook doesn't wear a persona so much as a closetful of identities. Opening cut "Crazy Psycho" gives one such personality, but stick with the album through that cutesy cartoon to experience Cook as a nightlife chronicler, romantic stalker, avenging force, sister-in-arms and dutiful daughter. Cook has described her piano style as being driven by a heavy left hand, and that bluesy, syncopated style marks many of these tracks, from the light tango of "Oh Timothy" to the stride-boogie of "Chaos." Her voice can match her ever-changing moods; she sometimes sounds like Betty Boop at the end of a Busch beer bender, but when the material goes for some emotional depth, Cook's voice follows suit.

But the fun of Bang Bang Bang is seeing when she chooses to deploy her various poses. That Cook melds the visceral nature of "Bang Bang Bang" -- a song that looks at vengeful murder with clinical clarity -- with the gentle lope of a wedding march is further proof of both her perversity and control. "Slana Singa (Mom Song)" is a more ruminative song about loss, one that shows strength and an exposed emotional core. Closing track "Temple," with its whirring synth oscillations and plucky harpsichord arpeggios, suggests a new twist on Cook's instrumentation, though her well-tempered clavier doesn't affect the vitriol that pops up elsewhere on the LP. That mix of instrumental sophistication, lyrical unpredictability and light crassness is a key tension on the album, and it displays Cook's many nuances.